Skip to content
WhatsApp
Tweet
Share
After coming close to world championship glory in 2014, Gary Russell Jr. (26-1, 15 KOs), a former United States amateur standout, delivered on his promise in impressive fashion Saturday night, knocking out defending champion Jhonny Gonzalez (57-9, 48 KOs), of Mexico City, in the fourth round in the main event of a SHOWTIME CHAMPIONSHIP BOXING doubleheader promoted by DiBella Entertainment at The Pearl Theater at Palms Casino Resort.

The talented and quick-fisted southpaw Russell, who stood and exchanged with Gonzalez, utilized his overall speed to dominate. He dropped the veteran three times, once in the third and twice in the fourth before referee Tony Weeks waved off the fight 37 seconds into the round (to watch the knockout click HERE).

“This is the kind of performance I always expect but don’t always get,’’ said Russell, who lost a close 12-round decision to Vasyl Lomachenko in his initial attempt at the 126-pound crown last June 21 on SHOWTIME. “If people only knew how hard we worked for this, the time we put in the gym, the mental and physical things we work on and put ourselves through every day.

“There are always obstacles to overcome but for this fight I was 100 percent. This win is for all the people who have been with me from the beginning.’’

Russell’s strategy was to eliminate Gonzalez’ vaunted left hook, and he executed the plan to near perfection.

“We were never in this to turn it into a track meet,’’ Russell said. “We were going to stand right in the pocket. We know what Gonzalez likes to do, and that’s throw the wide left hook. I tried to bait him into throwing it and he did.

“Honestly, I don’t think he recovered from the first knockdown.’’

Gonzalez, a two-time WBC featherweight world champion – and a veteran of 16 world championship fights – won the title for the first time in April 2011 and made four successful title defenses before losing it in September 2012. He regained the title on a shocking first-round knockout over Abner Mares in August 2013 on SHOWTIME, and had made two more successful title defenses before falling to Russell.

Gonzalez offered no excuses before quickly exiting the ring.

“I’m OK,’’ he said. “I did not expect this kind of fight at all. We expected him to run around the ring with me chasing. But he didn’t.’’ 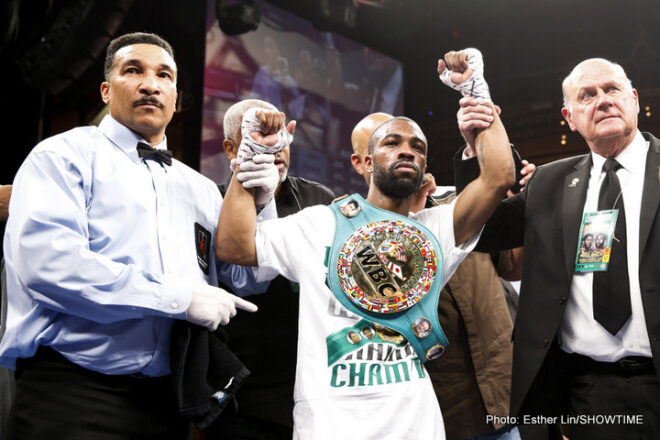 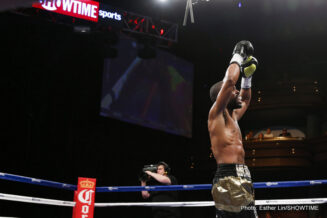 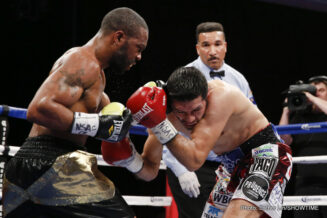 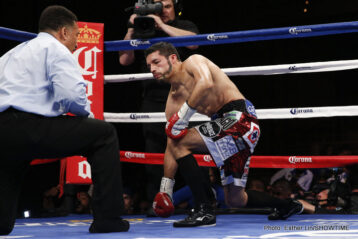 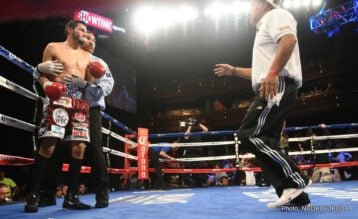 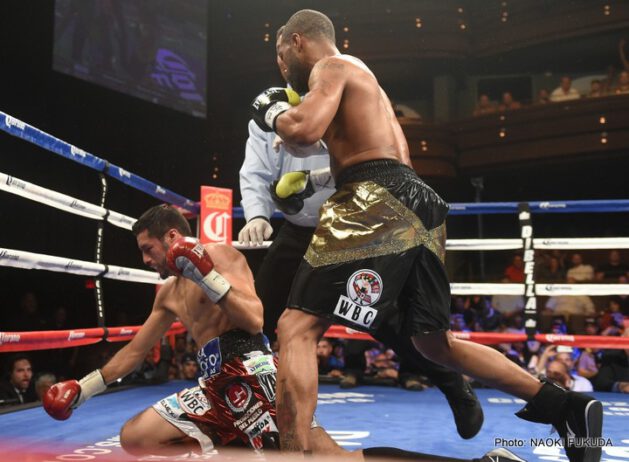 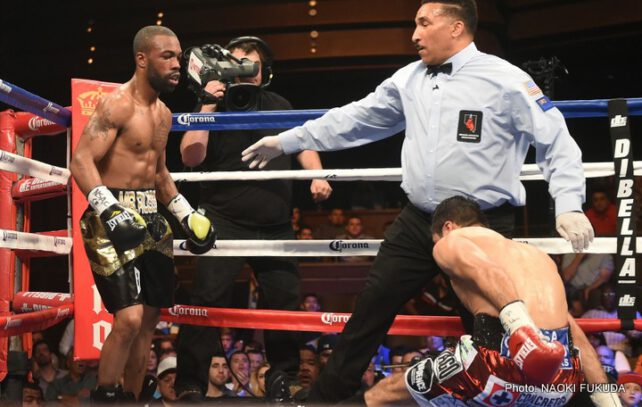 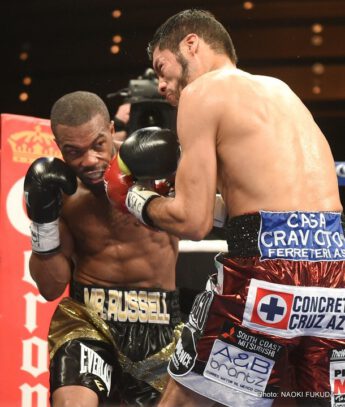 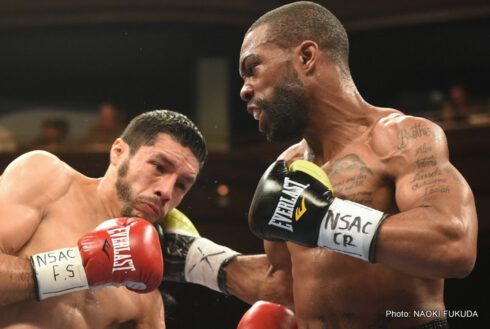 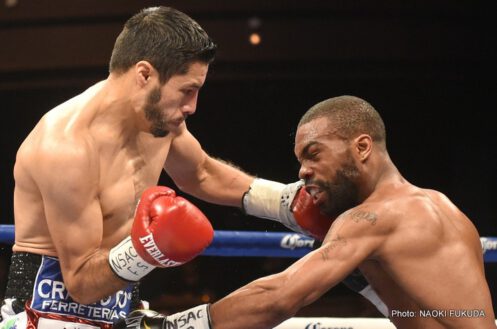 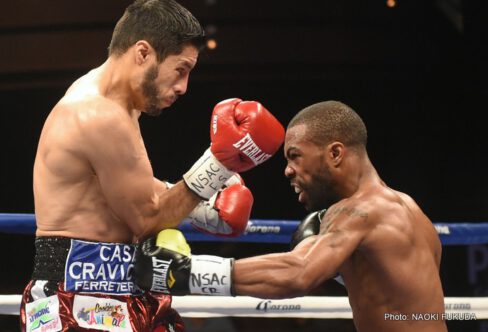 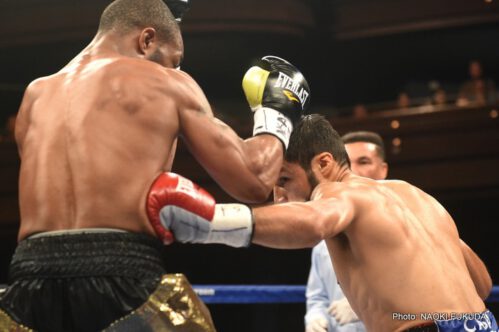 In the co-feature, Charlo silenced critics of his resume by defeating his toughest opponent to date.

He was surprised at the way his match with Martirosyan played out. “I definitely expected a much rougher fight,’’ he said. “This was easy compared to what I thought we were in for.

“I fought smart and when I was told to pick it up, I knew what time it was so I did. I’m absolutely ready for a shot at a world title.’’

Martirosyan, who was cut over the left eye from an accidental headbutt in the eighth round, was visibly disappointed with the result.

“I positively feel 100 percent that I won that fight,’’ he said. “I was the aggressor and forced the action. All he did was run. I landed the cleaner punches. I definitely felt I won the last round.

“I was stunned by the headbutt [that resulted in the bout being halted while he and the ringside physician discussed the cut]. Sure my left eye bothered me after that and it was blurry. But that’s no excuse.

“I felt I was hurting him. He never hurt me once. I really don’t understand this decision.’’ 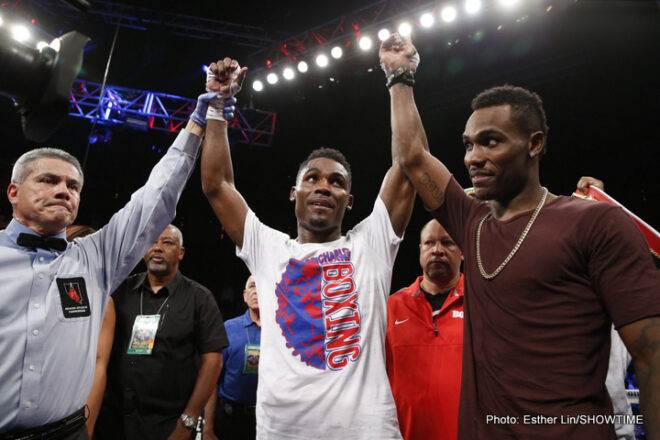 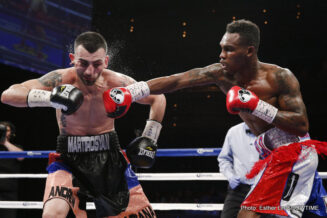 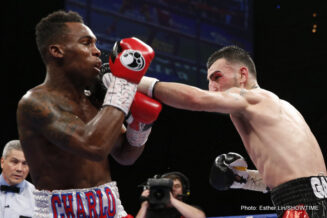 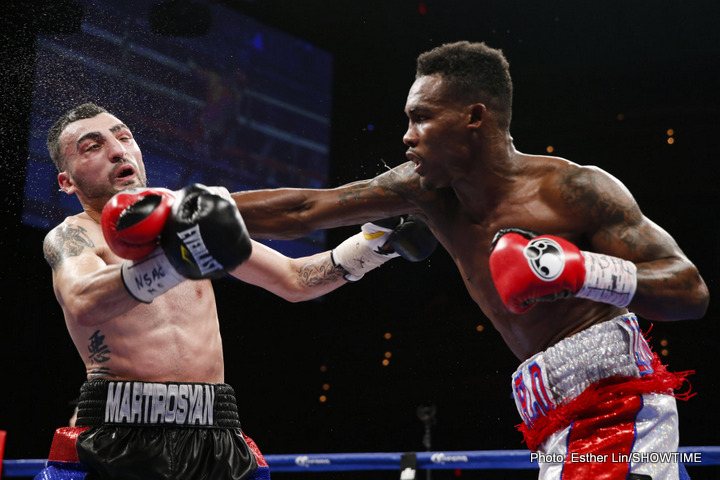 Brook, of Sheffield, was making the first defense of the welterweight title he took from previously undefeated Shawn Porter last August on SHOWTIME and fighting for the first time since suffering a serious injury when he was stabbed in the thigh during a holiday on the island of Tenerife last September.

The exciting welterweight showed no ill effects from the layoff in an emotional return to the ring, registering two knockdowns in the second round, and two more in the fourth, with the final knockdown coming at the closing bell. Dan suffered the first knockout defeat of his career (to watch the knockout click HERE).

“I’m back, baby!” said Brook, whose devastating performance against the usually durable Dan electrified the hometown fans while paving the way for a major showdown in the future.

“It was truly amazing to walk out in front of all my fans. I didn’t think I would ever walk again, much less box again. Here I am filling arenas. I can’t put into words how much it means to be back and defending a world title. It means everything to me.

“It was hard there holding it together. But this is where I belong. The leg feels fine. The leg feels as good as the other leg. There is no problem with the leg.

“If you’re watching Amir Khan, then get in here with me. I know you’re delicate around the whiskers. I’ll take you out.’’

The SHOWTIME CHAMPIONSHIP BOXING doubleheader will re-air this week as follows: