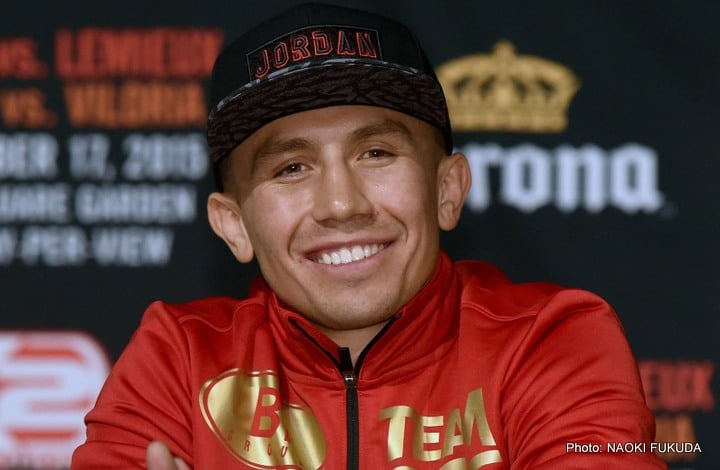 Middleweight star and, in the opinion of many, the best 160-pounder fighting today, Gennady Golovkin was talking to the press yesterday, ostensibly about his upcoming April defence against the unbeaten but largely unknown Dominic Wade (who didn’t even turn up at the press conference in L.A) but talk was always destined to turn to another, bigger fight: GGG Vs. Canelo Alvarez.

As Lance Pugmire of The Los Angeles Times reports, GGG was asked about Canelo and his desire to fight the Mexican star, as well as being asked his opinion on the Canelo-Khan fight set for May. Golovkin does not agree with those people who are sufficiently intrigued by the May 7th catch-weight fight to give Khan and his speed a chance of winning.

“[Canelo-Khan] is not good for boxing. Amir Khan, he’s not bad ….[Canelo] will knock the hell out of him,” Golovkin said. “This is true …… There’s a big difference in size…..I need a chance. Give me the chance.”

And that’s the big question, will Canelo, the only threat to GGG’s middleweight dominance, agree to fight him once he does as most people expect him to and beats Khan? It’s the biggest prospective middleweight showdown for many a year and we all know it needs to happen. But will Canelo, who says he needs time to gain any more than the 155-pounds he currently fights at, agree terms with Golovkin, who understandably insists the fight take place at full middleweight?

The longer this drags out, the more burning this question will become.

But, as his fighter said yesterday, sometimes boxing is a business, and not always a good one.

“This is a business, [sometimes] a terrible business,” Golovkin said. “I’m a boxer. Of course, I’m ready.”

So too is the entire boxing world. The ball, it seems, is well and truly in Canelo’s court.

Of further note, it has been reported how the Golovkin-Wade fight has already sold 6,000 tickets, with over two months to go until fight night.