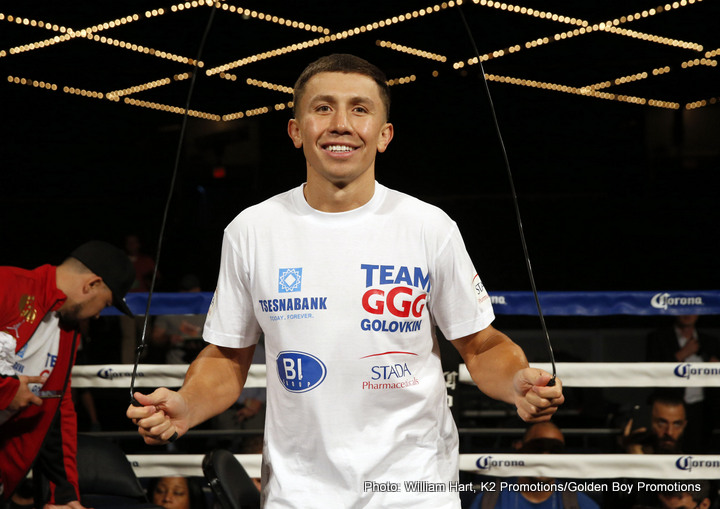 Referencing 1985’s famous 3 round war between Marvin Hagler and Thomas Hearns, Golovkin has assured fans that guaranteed excitement awaits, and they should expect the two champions to deliver on the promise of fireworks from the opening bell; with one winner.

“I’m very excited for October 17. This is my time, at Madison Square Garden where I’ve had a lot of fights; it’s amazing for me,” he said to fighthype.com.

“I’m more focused and I know my job. My focus is 100% on my job for a true fight, an original fight! This is not a game. It’s very important (to determine) who is number one in middleweight division.

“It’s like a very long time ago and [fights like] Marvin Hagler and Thomas Hearns. It’s the same, same style; old school, this is old school!,” he said.

If there is one thing Golovkin is certain of, it’s that this is just the first crucial step to unifying the division, something he is determined to do before looking for fights outside of 160, and a future clash with the winner of November’s WBC Cotto/Canelo fight, as well as December’s WBO clash between Andy Lee and Billy Joe Saunders, are firmly on the radar for the Kazakh KO artist.

“This is first step. What is second step? Maybe [winner of] Cotto/Canelo or Andy Lee and Saunders,” he said before also referencing the winner of the clash between 2nd tier WBA titlist Daniel Jacobs and his opponent in December, Peter Quillin. “It’s very interesting, this [fight with Lemieux]is just first step!”

How successful Golovkin will be in his unification endeavour is anybody’s guess, especially if people won’t fight him; though one thing is for sure – David Lemieux deserves huge props for stepping up, and this fight indeed potentially represents the start of GGG cleaning house at 160. I, for one, can’t wait!