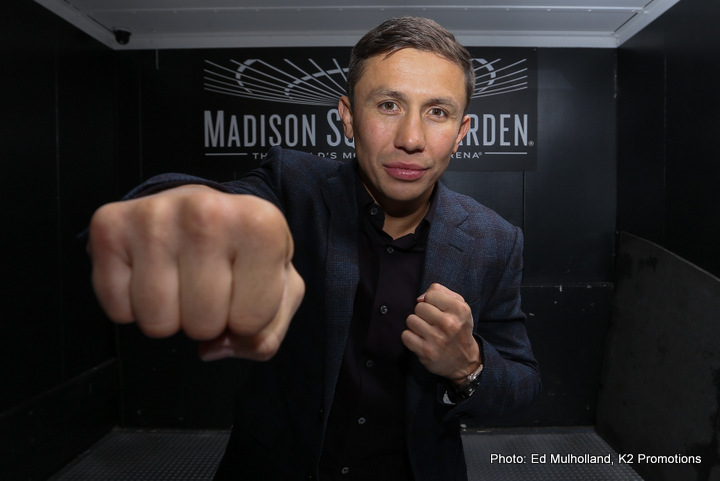 Undefeated World Middleweight Champion GENNADY “GGG” GOLOVKIN wants to make one thing clear. On Saturday, September 16, when he faces Canelo Alvaraez, Golovkin is walking into the ring at the T-Mobile Arena the same way he walked out of the ring at Madison Square Garden, in his last fight — wearing all his world championship belts.

“GGG will be proudly defending all of his titles — WBC, WBA, IBF, and IBO — as well as looking to add The Ring magazine title to his collection when he steps into the ring against Canelo,” said Tom Loeffler, Golovkin’s promoter. “Fans love this matchup. It’s not only the two best fighters in their division fighting each other in their prime, but also two of the most marketable fighters in the sport.”

Middleweight supremacy, elevation to the top of the pound-for-pound rankings, and a slew of championship belts will be on the line on September 16th when Canelo Alvarez (49-1-1, 34 KOs) takes on Gennady “GGG” Golovkin (37-0, 33 KOs), with Canelo defending his Ring Magazine and Lineal titles and challenging for the WBA and IBF championships at the sold out T-Mobile Arena in Las Vegas.

“I am very proud to be fighting for these important titles in this fight,” Canelo said. “This will be the best boxing event of the year, and I know all of the fans from Mexico and beyond will come out and enjoy the fight as I defend my Lineal and Ring Magazine titles, and take home the WBA and IBF championships.”

Canelo vs. Golovkin is a 12-round fight for the middleweight championship of the world presented by Golden Boy Promotions and GGG Promotions and sponsored by Tecate, BORN BOLD, Hennessy, Never Stop, Never Settle, O’Reilly Auto Parts, Fred Loya Insurance, Fathom Events, Tsesnabank, and Capital Holdings. The event will take place Saturday, Sept. 16 at T-Mobile Arena in Las Vegas and will be produced and distributed live by HBO Pay-Per-View® beginning at 8:00 p.m. ET/5:00 p.m. PT.