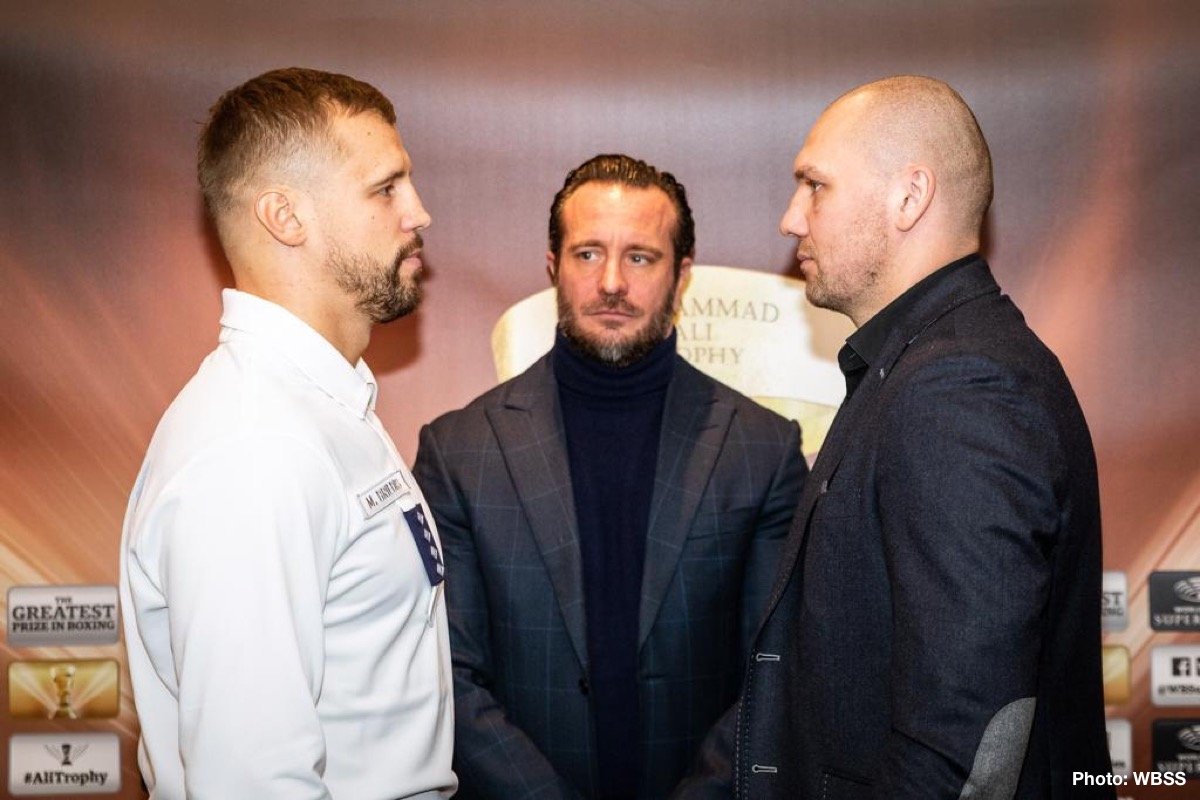 Latvia’s Mairis Briedis (25-1, 18 KOs) and Poland’s Krzysztof Glowacki (31-1, 19 KOs) exchanged words and went head-to-head at the kick-off press conference in Riga ahead of their 200lb semi-final clash at the Arena Riga in Riga, Latvia.

Both combatants defeated their quarter-final opponents by unanimous decisions. No. 1 seed Briedis beat Germany’s Noel Mikaelian to claim a spot in the semi-final, while 3rd seed Glowacki took the win against Russia’s Maksim Vlasov.

“I cannot wait to get in the ring in Riga,” Glowacki told after Monday’s press conference in Latvia’s capital. “I fought here in 2017 on the undercard of the WBSS quarter-final Briedis vs Perez. I remember a wonderful atmosphere and thousands of fans cheering for Mairis.

“Not everybody knows about it but a few years ago Mairis trained in our gym in Warsaw for some time. We haven’t sparred each other, but I know what he’s capable of and I have a lot of respect for him. But I’m confident I’ll beat him.”

Hometown hero Briedis, who came straight from his part-time job as a policeman to the press conference, is looking forward to getting a second chance to reach the 200lb final. Last year he came as close possible when he lost via a split decision to Ukraine’s Aleksandr Usyk at the Arena Riga.

“The reason I am in my uniform is that I came right from work,” Briedis. “But now it is time to spend more time in the gym. I am looking forward to the exceptional atmosphere at the Arena Riga and another WBSS semi-final. Another possibility to achieve what I didn’t in the first season.

“Glowacki is a strong fighter, we are both going for victory so it should be an interesting fight. Glowacki is tough, but there are no weak opponents in the super series. This is where the best meet the best.”

“We expect to see two of the best fighters on the planet battle it out for a space in the final of the Ali Trophy,” said Kalle Sauerland, Comosa’s Chief Boxing Officer. “Glowacki is someone who has reached the top of the game already, he has been a world champion after a ‘fight of the year’ against Marco Huck, where he showed what an outrageous warrior he is knocking out the record title defending champion.

“Briedis needs no introduction in this room. He is someone who has proven himself at the very, very top of the game obviously winning the world title. Someone who went on to fight in the first season in the World Boxing Super Series and was so close and unlucky against someone, Usyk, which many consider as the best boxer on the planet pound-for-pound.”

“This sets up very nicely for a massive event here in Riga. We are looking forward to June 15. ”

Tickets for the hotly-anticipated semi-final in Riga on June 15 will soon go on sale. Fans in the U.S. and Canada can watch the Ali Trophy semi-finals LIVE, exclusively on DAZN.

Briedis and Glowacki both defeated their hard fighting quarter-final opponents by unanimous decisions November 11 last year in Chicago. Briedis beat Germany’s Noel Mikaelian to claim a spot in the semi-final, while Glowacki took the win against Russia’s Maksim Vlasov.

Now tournament No.1 seed Briedis and No.3 seed Glowacki will battle it out in Latvia’s capital for a place in the cruiserweight final of the World Boxing Super Series.

Briedis is back at the Arena Riga after 2018’s incredible Season 1 semi-final which saw Ukraine’s Aleksandr Usyk defeating the hometown hero after a close and thrilling encounter.

“I can’t wait for the opportunity to get to the final,” said Briedis. “We are going to have another boxing celebration in Latvia that will be watched by the whole world and give me a second chance in front of my people to achieve what I missed the first season.”

Glowacki – supported big a big crowd Polish American crowd in Chicago – is self-assured ahead of the forthcoming clash.

“I can’t wait to get in the ring in Riga,” said Glowacki. “I’m confident I’ll beat Mairis on June 15 and move on and win the WBSS tournament and the Muhammad Ali Trophy!”

The World Boxing Super Series is looking forward to getting back to Riga.

“We are expecting another exciting night at the Arena Riga,” said Kalle Sauerland, Comosa’s Chief Boxing Officer. “The 200 lb tournament is about finding the best cruiserweight for the future. Both Briedis and Glowacki are eager – and have the potential – to be that boxer and they will produce a spectacular semi-final.”

On Monday Briedis and Glowacki will come face to face at a press conference in Riga.

Tickets for the hotly-anticipated semi-final in Riga on June 15 will soon go on sale. Fans in the U.S. and Canada can watch the Ali Trophy semi-finals LIVE, exclusively on DAZN.

Fans are encouraged to sign-up for Ticket Alerts to receive an email reminder when tickets can be purchased.