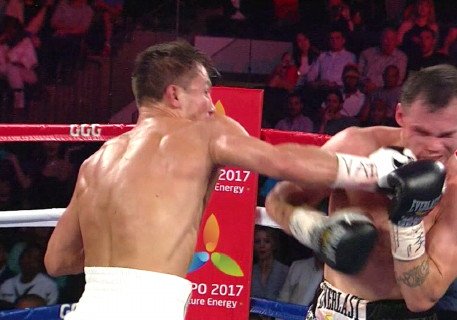 By the second round, Geale was already cut over the right eye and down twice. The first contact with the canvas came when Geale slipped on the camera strap of one of the ringside photographers. He apparently suffered no ill effects as he regained his feet. Later in the round, he got clipped with a right hand that caromed off of his left shoulder, and then off the back of his head. He motioned to referee Mike Ortega that he had been hit behind the head, but the knockdown stood.

It was clear that GGG was not worried about Geale’s punching power. He willingly sought exchanges. He was confident he would get the better of them, and that’s how the fight ended. Geale landed what should have been a pretty good right hand, one that should have at least momentarily stopped an opponent’s plan. GGG had a different idea, and zinged over his own right hand that crunched against the already battered head of Daniel Geale.

Geale beat the count, but couldn’t shake the unsteady feeling that was making him wobbly. Referee Ortega asked if he could continue, and at first it looked like he might say yes. But, when he tried to move a bit, it was obvious he was lightheaded and dizzy. Realizing he was in no shape to continue, he wisely told Ortega that know he couldn’t go on. Ortega waive things off at 2:47 of the 3rd Round. As Geale was led away, Max Kellerman climbed into the ring for a few words with GGG. As usual, GGG praised his conquered foe. When asked about his plans for the future, GGG said he wanted to fight all the champions in the division and unify the title. Max pressed him about who he would prefer next, and he said Miguel Cotto. Jim and Max also mentioned Carl Froch was asked about a possible fight with GGG, and he supposedly said GGG should be avoided because of his tremendous power. That’s high praise from a tough guy with a granite chin.

In the heavyweight lead up to the main event, Cuban/Ireland Mike Perez slopped around the ring with Bryant Jennings. The fight was much of a boxing exhibition or an MMA bout. It was too sloppy and unskilled for either. Jim Lampley and Max Kellerman tried mightily to pretend it was a worthy contest. The truth is it was malodorous. It was very unpleasant.

Jim and Max attempted to say Mike Perez was in better shape for this fight than his last, which can only mean that he was in terrible shape for his last fight. In this fight, there was stumbling, grabbing, pushing, blocking with the shoulder, and just an appalling display of the sweet science. If these two are representative of the best in the heavyweight division, then fans are in trouble.

Jim Lampley, Max Kellerman and unofficial scorekeeper Harold Lederman tried to huff and puff as much as they could to expound on the screw job they thought Perez got when referee Harvey Dock penalized Perez one point. It wasn’t clear whether they knew why Perez was being penalized, and because they were unclear, they seemed to feel Dock must be in error. Harold Lederman was even more incensed. He called what referee Dock did was “atrocious”!

The truth is Perez probably wasn’t the real victim. Instead it was referee Harvey Dock that this trio was trying to nail to the cross. Hell, Dock should have probably disqualified both of these guys for poor imitations of boxers. At least Jennings appeared to be in decent shape. Perez was fat. Sometimes that fact is not apparent until a fighter sheds his rope, but in Perez’ case, all you had to do was look at his face.

As the fight progressed, he did everything but fall on Jennings. He was repeatedly warned by Dock to quit grabbing and pushing down Jennings. Dock could have penalized him for that offense alone, let alone the later crap. Kellerman, with Lampley chiming in agreement, moaned about not hearing Dock give Perez a hard warning. Is it really necessary. Where the hell does it say that it the rule book. Is a referee prohibited from charging a penalty point for a deliberate foul? Of course not. Perez appeared to be committing two deliberate fouls. First, he tried to head butt Jennings. Then, after it was obvious referee Dock called for a break, he threw another punch. In truth, Perez was dangerously close to being disqualified, especially considering all the previous offenses.

It was a terrible sloppy fight. In fairness to Jennings, he had an excuse. Even though he was undefeated, just as Perez, he had much less experience. Perez, on the other hand, is supposed to be the typical well schooled Cuban fighter. He had no excuse. He came into the ring in such poor condition his skills were quickly lost to fatigue. Jennings deserved the win, and also deserves an apology from the HBO trio.