Last night in New York, bantamweight warriors Jonas Sultan and Carlos Caraballo put on a superb action fight, a Fight of the Year contender. The two men traded fiercely, they also traded knockdowns – with Filipino hard-man Sultan scoring four knockdowns, the unbeaten Caraballo scoring one – and in the end they fought to the bell. Sultan won via three scores of 94-93. Sultan is now 18-5(11). Caraballo of Puerto Rico is now 14-1(14). Last night’s fight was the kind of fight that makes us fans so grateful that we are fight fans.

Here are some of the reviews last night’s slugfest is getting: 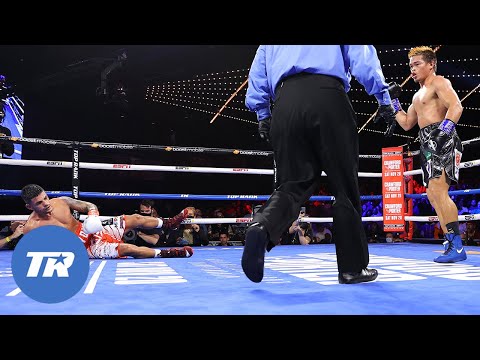 25 year old Caraballo, the favourite to win by a substantial margin, was shocked by the power, the determination and the sheer physical strength of Sultan. Downed in the second, the third, the sixth and the ninth rounds, Caraballo returned the favour during round-three, itself a Round of the Year candidate. Though some fans may not have heard too much about 29 year old Sultan, “Zorro” sure made a huge impact on all fight fans last night.

Never stopped and holding a big win over John Riel Casimero (this in a 2017 non-title fight, the win looking far greater now considering how Casimero has not lost since and is the ruling WBO bantamweight champ), Sultan has also been in with Jerwin Ancajas, dropping a UD in a failed shot at the IBF super-flyweight title in 2018. After what he did last night, Sultan may well see himself getting a second world title chance. One fight that would make sense is a fight between Naoya Inoue and Sultan.

“The Monster,” as we know, is facing little-known Thai fighter Aran Dipaen in December, but after that expected blow-out, maybe Inoue could fight Sultan? Could Inoue become the first man to stop the Filipino warrior who has the look of having been carved from granite? It sure would make for an interesting fight, very possibly a great fight.

For now, Sultan, and Caraballo, deserve our sincere thanks for the scintillating battle they put on last night. And a return fight between these two would not be a bad idea, either.

“This is boxing. This is war,” a victorious Sultan said. “And I came to win tonight. Caraballo is a tough man, but I wanted this one.”

In getting the biggest win of his career (so far), Sultan reminded us how we should never, ever judge a fighter by his pro record.