Gervonta ‘Tank’ Davis says he thinks a fight between him and Ryan Garcia will be “one of the biggest in boxing” when the two meet up.

Last Sunday night, Tank dismissed the idea of fighting a rematch with Issac ‘Pitbull’ Cruz, saying he wanted him to face Rolando ‘Rolly’ Romero next. It was previously believed that Cruz was the plan-B option for Tank if he didn’t get the Ryan Garcia fight in December.

It’s important that Tank fight Ryan as soon as possible because the Golden Boy promoted fighter could soon take a loss once he starts mixing it up with the top 140-pounders at light welterweight.

Abner Mares fighting to a 10 round draw last Sunday night against Miguel Flores removed another possible option for Tank Davis because there’s no way he can fight the former three-division world champion after that effort.

“I think it’ll be a great fight. One of the biggest fights in the sport of boxing,” Tank Davis continued about Ryan. “I think so because of what’s going on in our generation. He’s from a different side. It’s all entertainment.

“I feel it’ll be big for me and for him and the people. It feels good, but I also got to stay humble and keep working,” said Tank when told that he’s one of the most famous fighters.

“December, for sure. “I can’t say, but I just seen him at the club,” said Tank when asked if he has an update for a fight against Ryan Garcia in December.”

Tank Davis vs. Garcia will definitely be a huge fight as long as it’s promoted right. You can imagine that Ryan will do most of the heavy lifting in terms of promoting the fight.

It would be a good idea for Tank not to lean too much on his promoter Floyd Mayweather Jr to do the talking for him because he’s repetitive in what he says, and he tends to steer the conversation towards his own career. 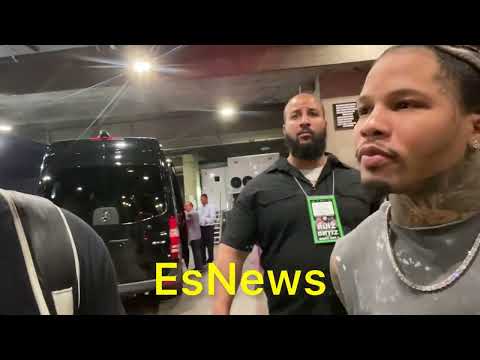