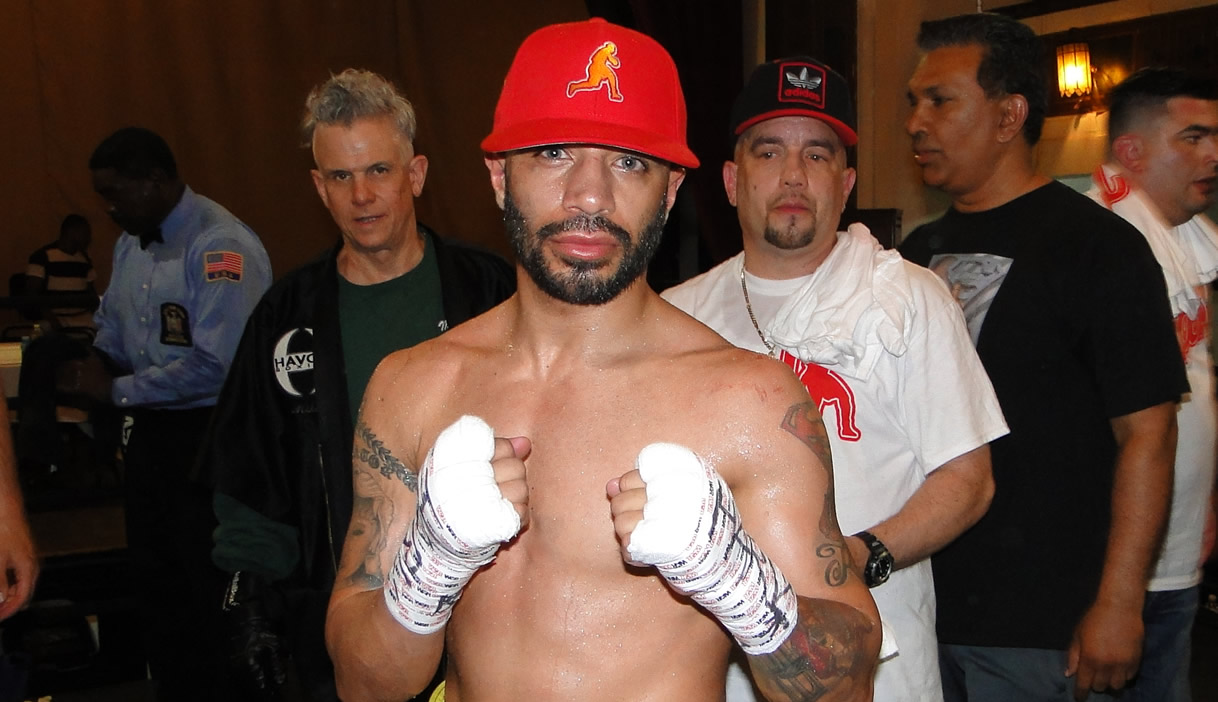 Photo: Uprising Promotions — Ronson Frank’s Uprising Promotions returned to the Brooklyn Masonic Temple on Friday night, putting on an action-packed card that featured comeback fights and a historical one, as well as providing a platform for some young local boxers to display their talents.

In the main event of the evening, Brooklyn junior lightweight “Kid” Gary Stark (24-3, 8 KOs) ended a nearly five-year layoff to face battle-tested veteran Jose Silveria (15-14, 6 KOs). From the opening bell, Stark was showing very little rust and looked to be much fresher than any man who has not fought since 2010 should ever be. He was boxing very well behind the jab, showing good movement and dictating the action with ring generalship.

Over the first five rounds of the six-frame affair, Stark continued at the same pace, boxing from the outside and picking his spots when he wanted to engage. By using controlled aggression in a tactical display, he was seemingly well ahead on the scorecards when the final round began. In that sixth frame, Stark opted for a more defensive approach, making sure that he was not making himself vulnerable for any unnecessary damage.

With six rounds in the books, this bout headed to the cards. The first score read aloud was an absolutely puzzling 57-57 count, sending a shockwave throughout the entire venue. However, that card was rebutted with 59-55 and 58-56 tallies in favor of Stark, officially making his comeback a triumphant one.

In co-feature bout, Delen “Sniper” Parsley (12-1, 4 KOs) returned after a year out of the ring, battling the always-game Troy Artis (3-6-1, 2 KOs) in middleweight action. At the opening bell, Artis immediately swarmed Parsley, but the Brooklyn native displayed good defense and remained patient before starting to pick his spots. Over the next two frames, Artis tried to apply the same type of aggression that he showed early, while Parsley looked to take advantage of his height and reach advantage. The Brooklyn native also began to focus his attack more on the body, which seemed to be causing Artis to slow down a bit when the third round concluded.

As it would turn out, the bell never rang to begin the ensuing frame, and the fight was waved off before the fourth round could get underway. Citing an undisclosed injury to Artis, his corner stated to the referee that he would be unable to continue, making Parsley the victor in this contest via TKO.

New York boxing history was also made on the card tonight, as flyweights Susan Reno (1-4-2, 0 KOs) and Paola Ortiz (1-5-1, 0 KOs) fought in a six-frame encounter that consisted of three-minute rounds. It marked the first time ever in the State of New York that two female boxers competed in three-minute rounds.

Throughout the six frames, a good technical match-up ensued. Reno used the approach of a tight guard and trying to be more methodical in her punch selections, while Ortiz worked behind shifty movement and a more slippery approach. Both fighters displayed some good boxing, switching up stances while working well off the bend and slipping punches. At no point did either woman appear to be affected by the extended rounds, but it did look as if Ortiz was able to do just a bit more than her New York counterpart.

When the judges were called upon after 18 minutes of action, Ortiz saw herself victorious for the first time of her professional career with scores of 59-55 (twice) and 58-56.

Estrada: "I’m Not Looking Past Cuadras"

In somewhat of an upset, gritty Puerto Rican Edgardo Junior Marin (1-4-1, 0 KOs) was able to take Cuban sensation Marcos Forestal (3-0, 2 KOs) the distance for the first time of his young pro career. As an amateur, Forestal was a three-time Cuban national champion with 300 bouts that included just 10 defeats.

From the opening bell of this match-up, Forestal came with relentless pressure, swinging his punches from wide and unpredictable angles. However, Marin proved to be a live participant in the fight, even confirming that Forestal is capable of taking a clean punch on a few occasions.

While Marin was able to hang in tough and force the ringside officials into the outcome, Forestal was in dominant control throughout the majority of the four-frame contest. When this fight concluded, all of the judges were in agreement, awarding Forestal with a shutout on each of the three cards.

In middleweight action, two Brooklyn natives squared off as Villi Bello (2-1, 0 KOs) and Jonathan Jeter (0-3-1, 0 KOs) took center stage. With a Muay Thai background, Bello had a bit of an unorthodox approach that made his angles harder to read, and that seemed to put him in a situation where he was landing the cleaner shots. The judges also saw it that way, eventually giving Bello the unanimous decision with three scores of 40-36.

A junior welterweight pairing between Victor Vazquez (3-1, 1 KO) and Jeremy Graves (0-4, 0 KOs) provided the Brooklyn spectators with an incredible four-round battle, one that put the approving fans on their feet when the final bell rang. In the bout, the two men immediately stepped into a phone booth and did not leave at any point. The wall-to-wall action was seemingly controlled by Vazquez over the first half of the contest, but the tide quickly changed in the third frame.

Soon after the third round got underway, Vazquez was hit with a perfectly-timed counter left hand, and he found himself on the canvas for an eight-count. Vazquez recovered from the blow quickly enough that he nearly stopped his opponent late in that same frame, but the knockdown made it very interesting when the fourth and final round got underway. Vazquez did seem to get the better of the activity again in those last three minutes, and he was eventually awarded a unanimous decision win by flush counts of 39-37 from all three judges.

In the opening bout of the night, a couple of Queens super middleweights got the action started as DeVaun Lee (4-1, 2 KOs) met tough opposition in Deferson LeGrand (3-3, 2 KOs). Over the course of the first two frames, LeGrand tried to apply pressure, but Lee was able settle in and box well while switching levels behind the jab. In the third round, an aggressive LeGrand stepped into a perfectly timed right hand, and it hurt him. After LeGrand buckled back into the ropes, Lee seized the opportunity and did not let him off the hook. He intelligently closed the distance between them before stepping off briefly and then jumping back in to swarm. After landing a barrage of punches that became increasingly less defended, the referee in charge was forced to step in and end the fight.

The official time of the stoppage came at 2:35 of the third frame, giving Lee a TKO victory.

For more information on Uprising Promotions and to keep up with all of our latest news, make sure to check out www.UprisingPromotions.com and follow us on social media: @UprisingNYC