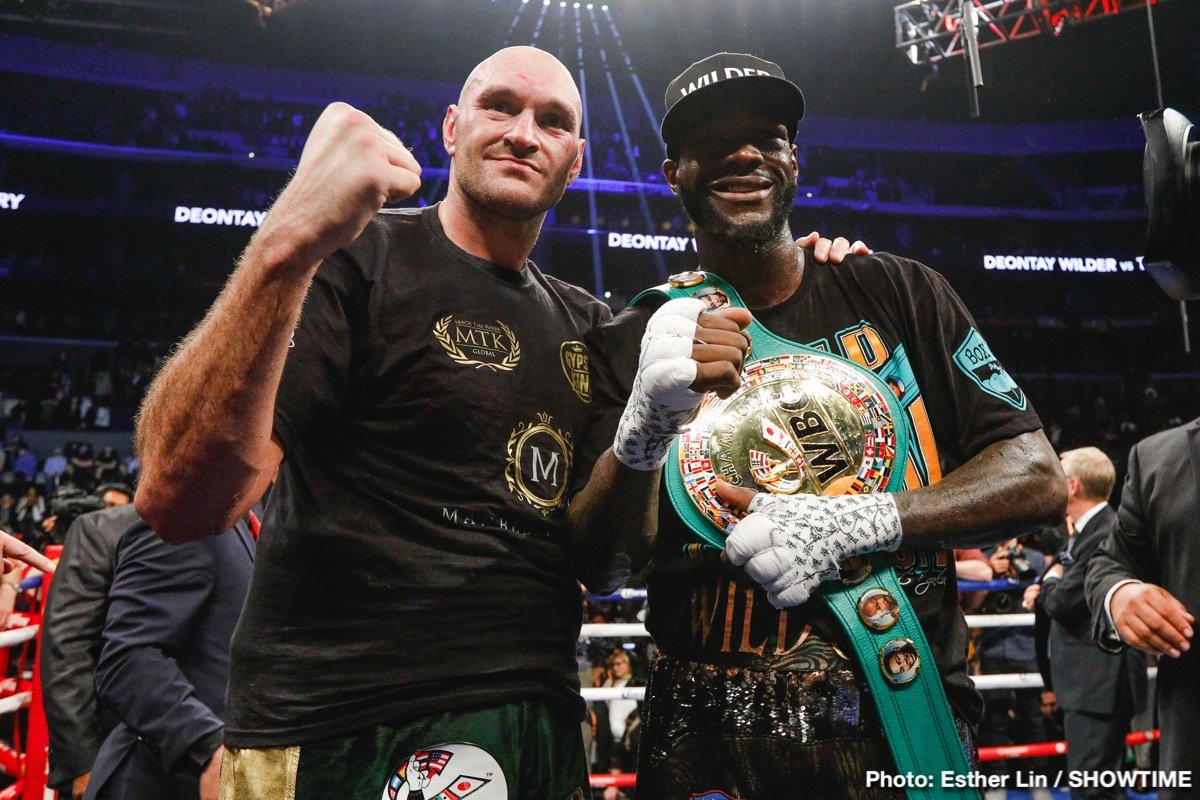 As expected, Tyson Fury and Deontay Wilder will not fight an immediate rematch. Almost as soon as it was (surprisingly) announced that lineal heavyweight champ Fury had signed a multi-fight deal with Top Rank/ESPN, fans felt the chances of seeing an immediate return of the thrilling yet controversial drawn fight between Fury and Wilder were unlikely. Bob Arum explained how a “tremendous” offer had been sent to Wilder, in the hopes of having the WBC champ fight on ESPN also, but we have still to wait and see whether or not Wilder puts pen to paper.

But now, just minutes ago, courtesy of a breaking news bit from Dan Rafael of ESPN.com, it has been confirmed that Fury will fight TBA in either May or June, and that the big return with Wilder will not happen before some time in the fall (if then).

BREAKING NEWS: @BronzeBomber vs @Tyson_Fury is officially not happening next. The @WBCBoxing has received communications as our process and while Wilder confirmed its willingness to fight the rematch, Fury will take on another fight with expectations to do rematch at a later date pic.twitter.com/vCkXwsQqCd

According to a “source with knowledge of the situation” that spoke with ESPN, Top Rank has informed the WBC and Team-Wilder that Fury will fight in May or June and then seek the rematch with Wilder in the fall. The WBC had asked for the two camps to clarify the status of their ongoing talks for an instant return fight by tomorrow (Wednesday). And now, here we are – we fans must wait at least seven months from now before we see a rematch of the heavyweight fight of 2018.

Again, this was highly expected. With Fury signing such a massive money deal with ESPN (worth around £80 million) it was thought the British fighter would take a far less dangerous fight than a return with Wilder in his first bout of the deal. Wilder must make his mind up soon with regards to whether he will go with ESPN or not, but we now wait and see just who Fury will face in May or June.

Joseph Parker has put his name forward, of sorts (the deal has to be “fair and reasonable” and we have no idea what such a deal would entail), while there are a number of other contenders out there who would not doubt love a piece of the Fury action, the Fury sweepstakes. There is potential big money to be earned from such a fight and of course a win over Fury – for many fans and experts the best heavyweight in the world right now – would elevate the still-TBA to incredible heights.

Fury looks to be in great shape, perhaps the best shape he’s ever been in mentally and physically, and the “Gypsy King” needs to fight and fight regularly. As to when he will fight again, we now at least have a rough date.