They don’t see Wilder as being capable of improving enough for him to deal with the tremendous advantage Fury has over him in athletic talent and boxing skills.

The excuses that Wilder has come up with to explain what happened to him in his seventh-round knockout loss to Fury in February 2020 aren’t believable to the boxing world.

No matter what Wilder or his fans can say to give a good explanation on why he lost so badly, it hasn’t worked.

The arbitrator that sided in Wilder’s favor to force Fury to fight him again gave a deadline of September 15th, which wasn’t that much time for him to prepare.

Wilder’s decision to agree to the July 24th date for the Fury fight effectively gives him even less training time.

What also is a bit troubling is Wilder’s decision to try at home rather than at a gym. It’s unclear what that’s all about. Is Wilder afraid of getting sick by training at a gym, or is there some other reason?

It might not matter that Wilder isn’t training at a gym as long as he’s got good sparring partners to help out. Wilder is going to be in better condition than Fury even without training in a gym because he doesn’t let himself go physically between fights by overeating or putting the wrong types of goods down his piehole.

“That’s a tough one. My heart is with Wilder, but from what I saw, my vote is with Tyson Fury,” said Jeff Mayweather on the Mayweather Boxing Channel in picking Fury to beat Wilder in the trilogy.

“He showed me he’s the more complete fighter out of the two,” Jeff said about Fury. “My heart is with Wilder, but I’m picking Fury.”

“Fury. I’m going by the last fight, but anything is possible in the heavyweight division,” said Badou Jack. “Wilder can crack.”

“I want Deontay Wilder, but Tyson Fury is more athletic to me,” said Adrian Taylor. “Wilder is training hard, but if I had to put my money on it, I think I’d slightly go with Tyson Fury on this. Tyson Fury, he’s athletic for a big dude.”

“That one, Wilder,” said Denis Grachev. “No, Fury. Fury is just getting better, better and better with every fight.”

“I like Fury,” said Mike Leanardi. “How do you come back from that kind of a** whipping and being off for a year and a half. People forget that Wilder had all those fights on undercards.

“That man is 35, 36-years-old, and now being out of the ring for a year and a half after a rough, rough fight for him. Now it’s the arbitration, ‘Sign the contract, and we’re having a fight in eight weeks.’ I

“t looks like he’s been working in putting up little workout videos and stuff like that, but I think it’s a tough night for Wilder. That being said. Obviously, he has a chance no matter who he’s fighting.

“I like both fighters. I think Fury has got a better ring pedigree and performance,” said Johnathon Banks. “Fury has got a top-notch trainer [Sugar Hill Steward].

‘Wilder has a new trainer [Malik Sott], and we haven’t seen his pedigree in training fighters. It’s not anything negative towards him. We just don’t know.

“We do know that Wilder has knockout power, but Fury is undefeated, and he has the edge in the fight. I’m not saying that, Fury. If anyone is going to have the edge, it’s going to be Fury. 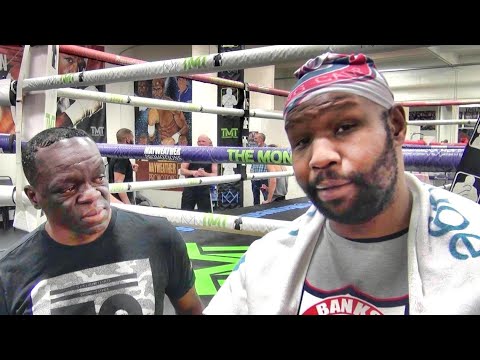 Read:  Finkel: “Wilder Will Fight Joshua In The UK Or In The Middle East. Period”
Share242
Tweet