WBC heavyweight champion Tyson Fury says he’s got tickets for Anthony Joshua and his promoter Eddie Hearn to attend his fight this Saturday night against Dillian Whyte at Wembley Stadium in London, UK.

Fury wants Joshua and Hearn to be his guests for the fight, which could be the last of his career.

Taking it one step further, Fury (31-0-1, 22 KOs) has offered the former three-belt heavyweight champion Joshua to work his corner during the fight with Dillian.

Fury isn’t saying what Joshua”s job duties would entail, but it wouldn’t be surprising if it had something to do with holding the bucket.

This could be the last fight of Fury’s career because he’s talking about retiring immediately after.

Win or lose, the 33-year-old Fury says he plans on hanging up his gloves afterward, and he has zero interest in sticking around to fight the winner of the July rematch between Oleksandr Usyk and Joshua.

“Yeah, they’re invited, they can be my guests. I’ve got a couple of tickets there,” ‘The Gypsy King’ Tyson said to iFL TV bout Eddie Hearn and Anthony Joshua

“I’ll give one to Eddie out of my ticket allocation and I’ll give two to AJ because he needs two, the fatness of him these days. Haaa.

“I’ll give him a couple of tickets that I’ll pay for, they can come as my personal guests.”

“AJ, he can help in the corner with me if he wants. I know he don’t like Dillian Whyte, so he can if he wants,” said Fury.

“I’m not going to go and promote something if I don’t have tickets,” said Dillian Whyte to iFL TV. “Frank [Warren] went and met one of my team, but unfortunately it was last week. That’s why I’m doing the media stuff now, waiting 12 weeks to do all of this.

“My absence made it big because I wasn’t there, people said, ‘Where is he?’ There were stories about where I was. S***, I was in my house training.

“They were stupid. When have I not turned up for a fight?” said Whyte when asked if he can blame boxing fans for wondering if he would turn up for the fight.

“They should know me. Sometimes, people should look behind the screen, and think, ‘Why has he not turned up? What’s going on? Something must not be right.’ Instead of criticizing people and trying to jump on the bandwagon, use your brain.

“Tyson just looked at him and shook his head, ‘Dad, what are you doing?'” said Whyte about Fury’s dad John Fury going off during today’s press conference.

“I was like, ‘Dude, you’re 100-years-old, you’re stepping forward,’ and he’s happy to go to war on the stage, but he’s not happy to go fight Mickey Theo,” said Whyte. 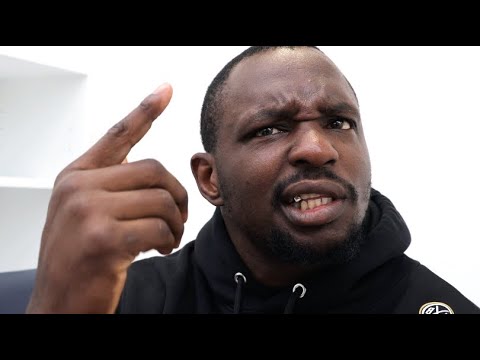