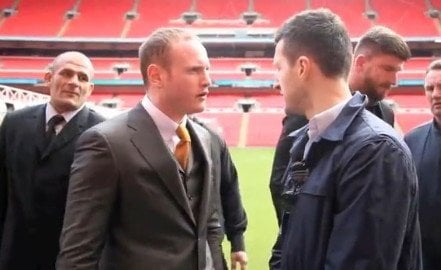 “This is a fight Froch did not want,” Groves said. ” Froch knows he can’t possibly win. The first fight was a robbery and everybody knows it. It gives me great joy that this fight is happening. Froch never wanted this fight – he was forced to take it. That’s round one to me. Round two is the fact that we are here in Wembley – this is my home town. This will be a national event but this is my home crowd. I will hit Carl Froch wherever I want – on the chin, on the ear, on the nose, in the ribs, wherever I want. Carl can take nothing positive from the first fight.”

Froch barely spoke directly to Groves, speaking instead of the good rest he had over the Christmas and new year period and how the time he spent with his family made him miss boxing and want to get back in the gym. This, he said, is “bad news” for Groves. Froch thanked those for attending and said he is excited about May 31st and doing the business. Froch said the last time he felt this good and this confident was going into his May 2012 win over Lucian Bute.

The two men did later engage in some minor hostilities, as the two posed for photos whilst stood on the legendary Wembley turf. Froch shoved Goves, sending his rival back a few steps. Both men are ultra-confident of victory in May.

Promoter Eddie Hearn is now expected to test the full capacity of Wembley Stadium, by putting a further 20 or even 30,000 tickets on sale. These two are expected to sell. A truly massive night of boxing will be witnessed in Great Britain on May 31st.