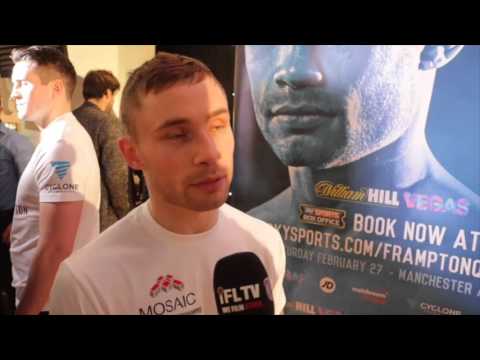 Here’s what Frampton and Quigg had to say as they approach Saturday’s fight: 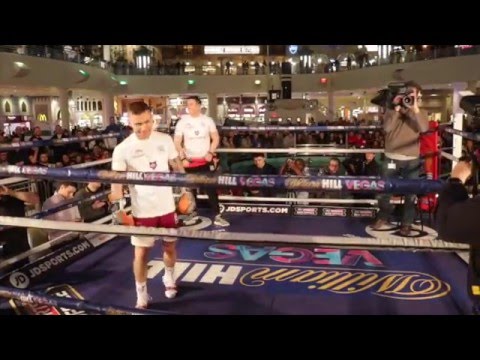 “I have wanted this fight for a long, long time. I thrive on the big occasions and there are not many bigger than a domestic super fight.

“I won my world title on a massive stage, Scott Quigg was handed his title after a draw. He has fought on big cards but not as a bill-topper and I genuinely don’t know if he will be able to handle this level of pressure. I’m going to use all of my experience to outbox, outfight and outgun Scott Quigg.

“We’ve been chasing these boys for years. They didn’t want it, end of story. Then all it took was one below par performance from me to convince his team that they should finally take the fight. If that first round in my last fight is what they’re basing their hopes of victory on then Scott is in for a big, big shock.

“I’ve had the best training camp of my career, I’m in the shape of my life and I’m going to become the unified Super Bantamweight World Champion.

“First and foremost I’m doing this for my family. I have two beautiful kids and both Christine (Frampton) and I want the best for them, that’s what drives me and makes me so focused on being the best in the world.

“I am 100 percent dedicated to the sport of boxing, I spend twelve-weeks in training camp in London away from home, only getting to go home a handful of times and I do this so I can be the best I possibly can.

“People have said Quigg trains like a machine. I can tell you I train every bit as hard if not harder, but I’m no machine. I don’t need to be programmed in order to perform.

“Shane (McGuigan) is a brilliant coach, I’ve been saying it all along. But now people are sitting up and taking notice. Shane and I work hard on tactics and techniques when we approach every fight, but we both know that if tactics need tweaking mid fight I can think my way through a contest. Scott Quigg can’t.” 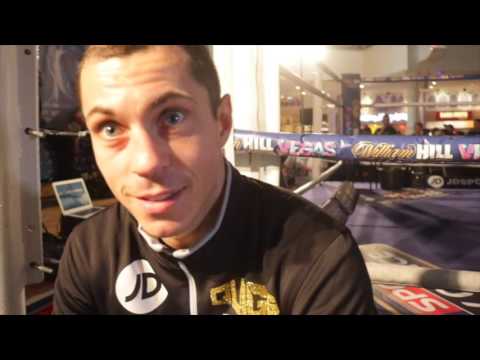 “I’ve always wanted the chance to prove I’m the best. Now the fight’s been made, I’m one million per cent confident that I’m going win in spectacular fashion. I can win on points, but I will knock out Carl Frampton.

“No-one expected me to get Kiko out of there early. If I’d have stopped him late or won on points, then Carl had already done that, so the only way I could get credit or show people what I am capable of was KO him early.

“With Carl and his performance in the States, they handpicked (Alejandro) Gonzalez from a list of opponents because they thought that he would be the easiest one. They wanted to go over there and look good in his U.S. debut so the Americans would rave about him – and he nearly came unstuck.

“We respect each other as fighters. You don’t become a world champion by chance, there’s a lot of hard work and a lot of talent involved. But they are in for a shock because they think I can only fight one way. They don’t think I can’t adapt and I’ll just come steaming forward. Maybe I will do that, but if I do come steaming forward, it’s because I am going to KO him.

“If I land clean on any super bantamweight or featherweight in the world, I will knock them out. So, it’s about just making sure I pick the right time and I open the gaps. And when the gaps are there then I’ll take them.

“I don’t take any notice of whether I’ve got the crowd behind me or whether it is behind my opponent, but I know for a fact that he takes comfort from having a lot of support. When he’s taken away from that, he shows his vulnerabilities. I think that will affect him. 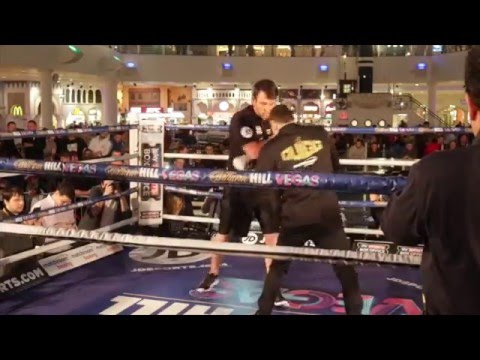 “The Irish are very passionate about the sport and they know their boxing inside-out. They get behind their man and they will create a great atmosphere. The atmosphere is going to go off even more because we’re both at the top of our game and there’s a lot riding on this. There’s a lot of pride at stake – it’s going to be electric.”

“I got into boxing to become world champion. I’ve done that and now I’ve set new goals to reach greater heights because I want to challenge myself every day.

“Ricky Hatton became a crossover star and was a hit in the US. He took 40,000 Brits to Las Vegas and became a global star. That’s the next goal that I’ve set for myself and I can make it if I keep working hard, maintain my dedication and focus.

“Getting this fight now on SHOWTIME in the U.S. is the first step. I’ll go out and do a job on Carl, win in a spectacular fashion and that’s going to give me a boost for my profile in the U.S.

“I am not going to give the WBA belt up. I want to fight the best. Guillermo Rigondeaux is next because that’s what the WBA have ordered.

“My focus is on beating Carl. We’ll look at fighting the best out there after that. I’ve always said, ‘I’m out to fight the best and beat the best.’ So, I’m obviously going to fight Rigondeaux. I’m not scared of fighting him. I’m not shying away from the challenge. I thrive on that sort of task and fighting Rigondeaux – who’s rightly so ranked No. 1 in the division because of what he’s achieved – would be a huge challenge. I honestly believe that if the time comes and we fight, I can beat him.”

“There is a lot of debate about who hits harder between Frampton and Quigg. I know Carl Frampton is the hardest punching Super Bantamweight in the world.

“Carl can box off the back foot, he can fight on the front foot and he has devastating one-punch power.”

“Carl is always so cool when the heat is on him, he steps up to the plate and delivers.

“Even in his last fight when he didn’t get off to a great start, Carl still managed to pull himself together and do what was needed to get the win.

“He’s a natural born winner. I had to work very hard just to be able to compete at world level. I think the same can be said of Scott Quigg, but for Carl it comes more naturally. Couple this with his incredible work ethic and that is why Carl Frampton is the best in the world.”