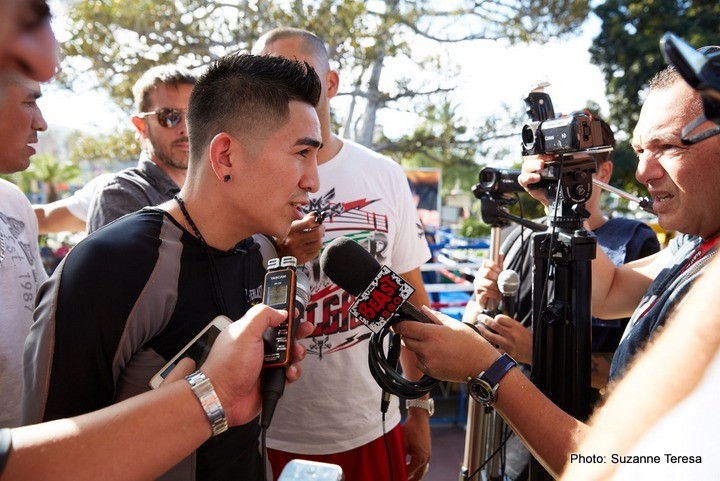 I’m just very happy and excited to go back in the ring. I’ve trained very hard for this fight. I know that it’s going to be a hard fight because Kiko is a fighter that comes to fight. He always comes ready. This could be a great opportunity because I know he has everything to win, everything to lose. So I know he’s going to come with everything. But I’m here ready for him. I’m just ready to give the fans a great show.

R. Flores
We will go ahead now and we want to bring in the adversary for Leo Santa Cruz. We are going to go ahead and bring up a man who has been a former world champion with 35 wins, 6 defeats and 27 victories coming by way of knock-outs. Boy, he can hit hard.

Kiko Martinez
I come in with one of the best trainers. I train very hard for this fight. I’m doing it for my family, for myself, for my daughter. I definitely come for a great victory. I will go back with a victory on the 27th. I am very motivated for this particular fight.

Sampson Lewkowicz
I really know and I like Leo Santa Cruz and all his family. We worked together in the past. I promise that I will give him the rematch. We’re coming to win.

Ray Flores
At this time, we’d like to have the operator open it up for questions.

Q
Do you think it’s important for you to not only to defeat Kiko, but do it in a kind of style that will make people say, “Wow, you know, he got him better even then Carl Frampton or Scott Quigg did?”

L. Santa Cruz
Yes, I told you very it’s important to look spectacular against Kiko Martinez and try to beat him better than Scott Quigg and Frampton did. So I could show that I’m at their level or even better.

Q
Are you going to pay attention to the Carl Frampton vs. Scott Quigg fight? If you’re successful on Saturday, are you interested in the winner?

L. Santa Cruz
Yes I would be interested in the fight. I’m going to work at this. I would I love to fight any of the winner of that fight. Hopefully I get the win that night. I would definitely like to fight the winner of Frampton and Quigg.

Q
Kiko how much do you feel that you’re being overlooked in this fight against Leo, now that he is fighting another top name. In addition to that what are your thoughts on fighting in the heavier weight division?

K. Martinez
I know a lot of people are doubting me. I have put in the time and training. I’ve worked very hard preparing for this matchup. I’m going to change the opinion of the public.

I know Leo Santa Cruz is a terrific fighter but when I get the victory over him, it will take me to the world title. It will continue to allow me to provide a good life for my family and everybody around me. My performance on Saturday is going to change the opinion of the public.

Q
Why are you taking the fight where you have everything to lose and nothing to gain as you mentioned?

L. Santa Cruz
When we get inside the ring, we’re the same. So I’m not looking at him in any way, shape, or form. He’s an opponent. I have to go out there and have to perform. At the end of the day, this is a great opportunity for Kiko Martinez. I know he’s going to come prepared.

But I myself have spent the time in the gym bracing for this matchup. We’re going to step inside the ring, we’re going to collide, and we’re going put on an exciting show for the fans. When fans come to watch this fight and tune in on SHOWTIME, I want them to leave satisfied.

I’m going to go out there and get the victory and really put in the time in and put on a fantastic show for all the fans. Because I know Kiko Martinez is a very formidable opponent.

Q
Leo Santa Cruz hasn’t lost in 10 years. Why does Kiko Martinez believe he’s going to be able to change that on Saturday.

K. Martinez
I know that Leo Santa Cruz is a fantastic fighter. But at the end of the day, when guys have come in to fight him, they’ve already been defeated before they stepped inside the ring with Leo Santa Cruz. I don’t think anyone he’s fought is as strong as me or has the kind of desire that I have.

I’m coming here to the United States to get the victory. I’m very hungry. I’ve spent two months in training camp. I think that my power is going to be the difference. Here on Saturday night against Santa Cruz, I have the opportunity of my life. I’ve spent time away from my family and I’m coming here to get the victory. It’s going to be an exciting fight. I respect Leo Santa Cruz, but I’m doing to get the win on Saturday.

How are you going to be able to handle turmoil like Kiko Martinez who is extremely hungry and has a desire to get the victoru?

L. Santa Cruz
I know I train the same way against Kiko Martinez, working for Martinez, as I did against Abner Mares and all my other adversaries and my opponents. I know he’s coming to try to get the win over me and better the life of his family.

But I myself have that same mindset. I understand Kiko Martinez is a very strong fighter. He has a powerful punch. We are going to use our intelligence. We are going to put on a show for all the fans on Saturday. I myself go and any time I step inside it the ring, I fight for my family.

This is a huge opportunity for him. But I put in the time in the gym to be victorious. I look forward to putting on a fantastic event on Saturday.

Q
I want to ask him does he feel that he’s in the same situation that he was in a few years ago back in 2013 in Atlantic City, when he first came to the United States versus Jonathan Romero, where he was the heavy underdog. But he was able to pull the upset, basically being the bully. Is that the game plan for this fight?

But I’m a lot smarter. My training habits are better. I have put in and learned so much since that fight on August in 2013. But I think that Santa Cruz is a stronger fighter than Romero. But I’m, at the end of the day, I’m going to surprise people just as I did against Jonathan Romero and I will win on Saturday.

Q
How do you deal with that pressure to out-do the Frampton and Quigg performances or to just get the win, which is most important?

L. Santa Cruz
There is a little bit of pressure. Scott Quigg and Carl Frampton, they knocked him out. I want the same. I wanted to get in there in the program.

So if I get the win that night, I want to face the winner of Scott Quigg and Carl Frampton then. I’m going to out there and I know I can beat anybody.

First of all, we’ll let Leo go ahead and end the call with closing comments. Then we’ll move over to also Kiko and then Sampson.

L. Santa Cruz
I just want to say I want to invite all the fans to come February 27 to the Honda Center and they’re not going to want to miss this fight. I always come to fight, I always come to give the fans a great show. This night is not going to be an exception. I come really 100 percent prepared and I’m going to go out there and do everything in the ring.

They’re going to know I’m fighting for my family, I’m fighting for our fans. All I want to do give a great show for the fans. So you guys don’t want to miss this fight. Go out there and support us. And I’m 100 percent sure you guys are not going to be disappointed.

So thank you very much and have a great day.

K. Martinez
I want to thank my entire team. I’m excited about this fight with Leo Santa Cruz. I think I’m going to come on Saturday, this upcoming Saturday, February 27th, at the Honda Center in Anaheim and I will be triumphant and win the title. We’re going to put on a great show for the fans. I’m going to change the opinion of the public that at the end of the day, it’s going to be an exciting fight.

S. Lewkowicz
I want to say thank you to Stephen Espinoza and SHOWTIME. Because it really, it’s a great, great night of fights, three fights, starting with the heavyweights and then with my other fighter, Hugo Ruiz, that is fighting in the rematch. This is an exceptional night of fights.

R. Flores
That concludes the call. We appreciate the media for partaking in this. Tickets start at $27. You can get them now at ticketmaster.com or the Honda Center Box Office.

It’s a can’t miss event this Saturday, February 27th, at the Honda Center in Anaheim. We will see you in Anaheim for a fight we cannot wait to get to the West Coast for a big weekend in boxing only on SHOWTIME.