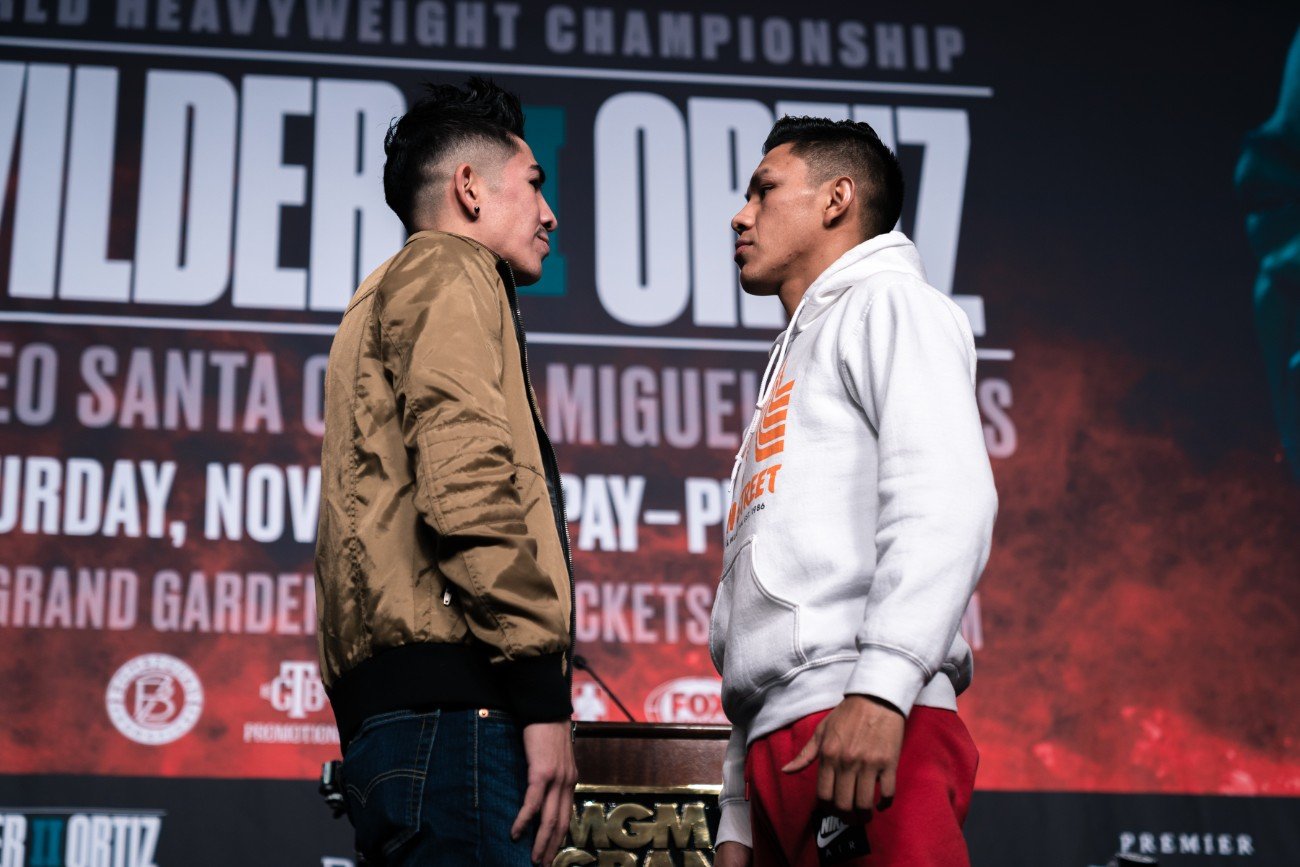 Fighters who will step in the ring this Saturday, November 23 in FOX Sports PBC Pay-Per-View and FS2 Prelims action went face-to-face and previewed their showdowns Thursday at a press conference before they enter the ring at the MGM Grand Garden Arena in Las Vegas.

FOX Sports PBC Pay-Per-View Prelims on FS2 and FOX Deportes begin at 7 p.m. ET/4 p.m. PT and are headlined by unbeaten Leduan Barthelemy and Eduardo Ramirez battling in a 10-round featherweight rematch.

Prior to the start of the press conference, WBC President Mauricio Sulaiman recognized on stage U.S. Army Veteran Jim Rice and U.S. Marine Steven Cameron, and invited them to be guests for Saturday night’s event in addition to giving them honorary WBC belts.

Here is what the fighters had to say Thursday from MGM Grand in Las Vegas:

“I’m really excited for Saturday night. It’s going to be an amazing fight and an amazing fight night. We might have the fight of the night with me and Ceja. There are a lot of hungry fighters looking to put on a show and I can’t wait.

“I’m prepared to go the full 12 rounds, but I know my skills and I’m confident in my power in both hands. I’m aiming for a stoppage win.

“It’s a dream come true to be fighting here at MGM Grand. I’m so thankful to my team and my family who have helped me get to this point here. I’m very proud to be entering that ring Saturday night.

“Fighting in my backyard for my last fight was a big moment for me. My fans had been waiting for me to headline there for years. I’m really grateful and I was more than ready to take advantage of the opportunity.

“My opponents think I’m a pretty boy and don’t know how to fight, but once I hit them with my power, they know what I’m made of. We’ll see how Ceja reacts on Saturday.

“My brother (former world champion) Omar has told me to take advantage of my youth and this moment in front of me. He told me to take it all in and experience this beautiful event. I’m here to give the fans a great moment. It’s definitely a milestone in my career that I’ll never forget.

“Julio Ceja is going to come forward to fight and make this a great fight. We both come forward, but I can also box and switch between lefty and righty. I can fight with any style for any fight that I’m in.

“I feel like this is going to be a stoppage. My volume of punches and my power will be there. I throw over 100 punches around. I’m going to be active. I’m confident in my conditioning and ready to take this 12 rounds if I have to.”

“I know that I have my team 100 percent behind me and I’m going to win this fight for them and everyone in Mexico.

“I prepared very well for this fight. I did not just come to fight. I came to win. That’s what’s going to happen on Saturday. We’re going to steal the show.

“Experience is the most important factor in this fight. My experience combined with my preparation, all mixed together, will make this a great fight and a victory for me and my team.

“The reason Brandon is a champion is because he’s a very good fighter. But just like he has power, I have power too. I have the power to deal with him and make this very exciting.

“I had a very special and specific training camp for Figueroa’s style. He attacks, so we’re going to attack too. We’re going to be in front of him and fight.

“This training camp has me prepared both mentally and physically to sustain an all-out assault for 12 rounds against a strong young fighter.

“This is the most important fight of my career. I’m desperate for a win. Last time against Guillermo Rigondeaux, I believe they took the win away from me. I’m using this fight as a chance to catapult myself to the level where I belong.”

“I’m excited to be on this huge card headlined by Deontay Wilder vs. Luis Ortiz. I’ve had great preparation for this fight. I know that I am facing a strong opponent, but my intelligence and my ring IQ will help this fight end with me being victorious.

“Me and Freddie Roach have put together a great game plan for Rodriguez. We’re very confident that we’re going to win this fight by knockout.

“I trained very hard with Freddie Roach so that I could win in spectacular fashion. This has been a very good year and I want to end it with a bang and a knockout.

“There are a lot of big names in the division, but first I have to win spectacularly this weekend. Then I will worry about that challenge and I’ll take on any of the big names and champions.

“I have a hard fight in front of me. I don’t feel any pressure to compete against other champions and how they’ve done against Rodriguez. I’m going to win the way I know how to win.

“My training camp has been so strong and I feel 100 percent perfect heading into Saturday night. I hope Rodriguez can say the same so that we can give the fans a great show.”

“I want to thank my opponent or accepting the rematch. I’m here to win and I’m going to take the win home.

“My tactics will be a little different for this fight. I prepared very hard and worked on some strategic improvements. I’m confident that I will win decisively this time.

“I focused a lot on my physical training and strength and conditioning for this fight so that I’m 100 percent in that regard. My technical ability will always be with me. It’s in my DNA. So with those two things combined, I will come out victorious.

“I want to show the world my caliber as a fighter. I’m ready to take the next step after this win and become a world champion. My true technical ability will be on display.

“I’m very happy and excited to be fighting alongside a fellow Cuban in Luis Ortiz. He’s not just another great fighter but he’s also a good friend of mine who has always given me advice on how to become better.”

“I’m ready to put on a great rematch against Barthelemy. I’m excited to put on a good show and be on the winning side Saturday night. I’m going to show everyone what I trained for.

“I prepared well and I’m 100 percent confident that I’m going to give a better fight than the first time. My training has put me in a position where I know I’ll be at my best.

“For the first fight it was my first time fighting outside of Mexico and I was definitely a little bit nervous. I think the nerves did effect my performance. I wasn’t scared, but my mental game wasn’t perfect.

“Since that first fight, I’ve had a lot of big fights in the U.S. and fighting Lee Selby for the title in the U.K. I’ve matured and I’m much more comfortable heading into this fight.

“Barthelemy is a great rival. I don’t know what changes he’ll make, but it really doesn’t matter to me. There are key aspects to my game that I’m going to use to come out victorious.”

“I’m excited for this opportunity on a big stage. This is why I’m with PBC, to be a part of these events. I’m in the best shape of my life and ready to put on a show for the fans.

“I’ve dreamt of fighting in Las Vegas my whole life, ever since I was a kid. Fighting on a stage like this under Deontay Wilder is amazing. I’m going to absorb the experience and put on a show Saturday.

“I’ve been fighting my whole life so I’ve always balanced school work with boxing. Right now my focus is on Saturday and I’m ready to put on a show.

“I’ve had strong preparation in this training camp. I’m in the best shape of my life. I feel great mentally and physically, and I’m ready to fight on Saturday.”

“I want to thank everyone for this opportunity. I’m physically and mentally in the best shape of my life. Come Saturday night, I’m looking to take that win. I’m a crowd pleasing fighter and I’m looking to give the fans a great show.

“Just like any fighter, I come 100 percent prepared. I feel like mentally and physically this is the best I’ve ever been. I’m ready to get the job done.

“This is my first six round fight and I know that my opponent is very durable, but I’m ready to get this victory on Saturday.

“I’ve been training in San Antonio for a month before my fight. I was doing strength and conditioning in my hometown prior to that. We’ve been sparring everywhere and getting really good work.

“I was sparring three times a week, training really hard, training twice a day. It was hard, but it’s awesome. I love it.”