Mike Coppinger reporting the news of the success of the Mayweather – Paul PPV event bringing in over one million PPV buys.

The exhibition showed that a lot of money can be made from a faded old boxer exploiting the huge fan base of a popular YouTuber in Logan Paul.

What we don’t know, besides the final totals, is how many refunds will be given by Showtime due to the technical problems some viewers had in seeing some of the undercard fights.

But even with refunds, it may not put a serious dent in the success of the event.

For such a low-level fight and with undercard being put together with non-stars, costing very little, the profit margin will be huge.

Mayweather is the one that will be the real winner, as he gets 50% of the PPV. The thing is, most of the PPV buys were likely from Logan’s YouTube fans, not from boxing fans.

“Sources: The Floyd Mayweather-Logan Paul exhibition generated over 1 million buys on pay-per-view. The PPV was available via Showtime and Fanmio at $49.99. There’s no precise PPV number available yet, but the show will at least exceed 1 million in buys,” said @MikeCoppinger.

“I don’t think it was good for boxing, I really don’t,” said Stephen A. Smith to ESPN on the Mayweather vs. Logan exhibition match.

“I’m disappointed. The stage of Florida wouldn’t have sanctioned the bout. There was a 35-pound difference. Floyd Mayweather came in heavier than he’s ever been.

“I’m talking before they even started boxing, I’m talking about the size. I look at it from this perspective.

“I love what Logan Paul and Jake Paul have done in showing the boxing public there’s a way in making this money and gain notoriety about yourself without being at the mercy of the promoters,” said Smith.

It can’t be good for boxing because what it means is that fighters will be pushing to fight other YouTubers to make easy money.

You can also say the message that real boxers got from the Mayweather vs. Paul fight is that it pays to pick weak opposition and then go theatrical in a professional wrestling way by making it seem like it’s going to be a competitive fight. In other words, fool the public into spending their money on a mismatch.

“If you want to say it’s good for boxing, I think it’s good because it puts pressure on the promoters or it should put pressure on them to give us the fights we want to see,” said Smith about the Mayweather vs. Paul exhibition.

“For example, there’s no reason that we should not see Crawford against Errol Spence, we should see that.

“Anthony Joshua against Tyson Fury, we should get that hopefully, but Wilder gets Fury for the third time again.

“Maybe Andre Ward will come out of retirement. I love Canelo Alvarez, he’s my favorite fighter right now, and I think he’s the pound-for-pound #1 in the world. You want to see those kinds of things.

“When I look at this, a world-class world champion like Floyd ‘Money’ Mayweather giving a YouTuber this opportunity, who has had one fight on his professional record and you last eight rounds, that’s going to give life to novices out there who don’t belong in the same class as these guys to think they can do stuff like this.

“I think it’s going to compromise the quality level of completion that we all salivate for when it really comes to boxing,” said Smith.

It’s safe to say that Mayweather vs. Logan could be the forerunner of a massive surge of low-quality YouTubers or MMA vs. boxers type fights. It’ll be a total dumbing down of the sport in a race to the bottom.

“I don’t think it was bad for boxing at all,” said Max Kellerman to ESPN on the Mayweather vs. Logan Paul exhibition match. “First of all, Floyd Mayweather is retired, and he’s never coming out of retirement. he already made that clear.

“He told everybody ahead of time what this was going to be. This is no buyer beware. He told you. It’s not like he sold you a false bill of goods. He told you, ‘this is an exhibition, I’m going to go out and half fun.’

“That’s what he did. Logan Paul built up a big enough following, I would say on social media with 20 million people, and he brings a lot of economic clout to an event.

“He’s much bigger than Floyd, Floyd has been retired for years and everything. There was something about it that was intriguing.

“What you don’t want is that in an exhibition. ‘Oh, no one got knocked out, and Floyd just kind of played with him after the second round, and kind of walked him down and didn’t really want to finish him it seemed and all of that.’

“Do we want the opposite? Do we want Floyd to kill him? Is that what we’re looking? Do we want Logan Paul to be rushed to the hospital in an ambulance?” said Kellerman.

What fans don’t want is fighters carrying YouTubers to give the appearance of the fight being a real one, but in actuality, it is a fake theatrical match to make it seem competitive. That’s bad for the sport if boxing becomes WWE-esque because the fans will see it as fake and drift away.

“Is that what? No, it’s an exhibition. Were you entertained?” said Kellerman. “Yeah, I was entertained. By the way, it was a good undercard. Hurd and Arias upset, that was a really good fight. That was a night of entertainment.

“You don’t want to pay 50 bucks the next time when one of the Paul brothers fights or Mayweather, don’t do it, no one is forcing you. But I’ll tell you this.

“There are some events that they try to make, and the public is, ‘Eh, I don’t care.’ That wasn’t this, people cared. I got no beef,” said Kellerman in sounding like an enabler or Mayweather’s dreadful circus fights.

“Well, they care because of the combination of them both,” Stephen A. Smith said when asked if the public cared about the Mayweather-Paul exhibition because of Logan or Floyd

“We can’t ignore a dude with 19 million followers on Instagram, which is what Logan Paul has. He [Logan] did fight as hard as he could, and I get all of that.

“What I’m saying is, when you look at Floyd and the quality of the guy he went up against and the fact that he lasted eight rounds, you’re going to see a situation where folks out there are obviously thinking about making money.

“There’s no crime in that, but they’re going to continue choosing their competition. I would remind you, the great Jim Lampley, Larry Merchant, and others lamented for years.

“People picking and choosing the level of their competition. It’s usually not the stiffest, and now it’s been taken to another level. If I’ve got YouTubers out there, who ain’t quite ready yet to go up against big-time boxers and what have you and they’re lasting.

“If I pick the right opponent to entertain folks, I don’t have to worry about getting in real fight. Those kinds of things compromise boxing,” said Smith.

“I would understand that if the argument is the boxing public only has so many dollars in terms of disposable income,” said Kellerman.

The average boxing fan isn’t a millionaire, and they don’t have thousands of dollars to spend on watching dreck from YouTube boxing.

“They’re only going to buy so many pay-per-views, and if they’re spending money on this, that fighters that deserve it more like Terence Crawford, they’re not going to spend money there,” said Smith.

“That’s not what’s happening. This is not the boxing public that’s buying these fights by and large.

“These are casuals, these are people that follow Logan Paul. What I’m saying is, you’re not soaking boxing fans here.

“They’ll have disposable income for other fights. You’re not taking that away from them seeing other fighters,” said Kellerman.

Yeah, if the networks like Showtime, ESPN, Triller, and DAZN are focusing on putting on the celebrity boxing matches involving YouTubers and other non-boxers, what we could see is lesser quality product being shoved down the throats of the fans. That’s not good.

Trying to imagine if this were the NFL and all of a sudden flag football matches involving celebrities against former NFL players were suddenly given network time and sold on PPV, it would lower the value of the sport. Shooting for the lowest common denominator cheapens the sport of boxing.

It’s interesting that there are so many enablers like Kellerman out there who don’t have the foresight to see how this can hurt boxing. 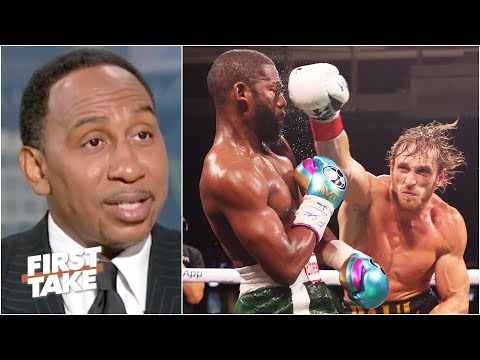