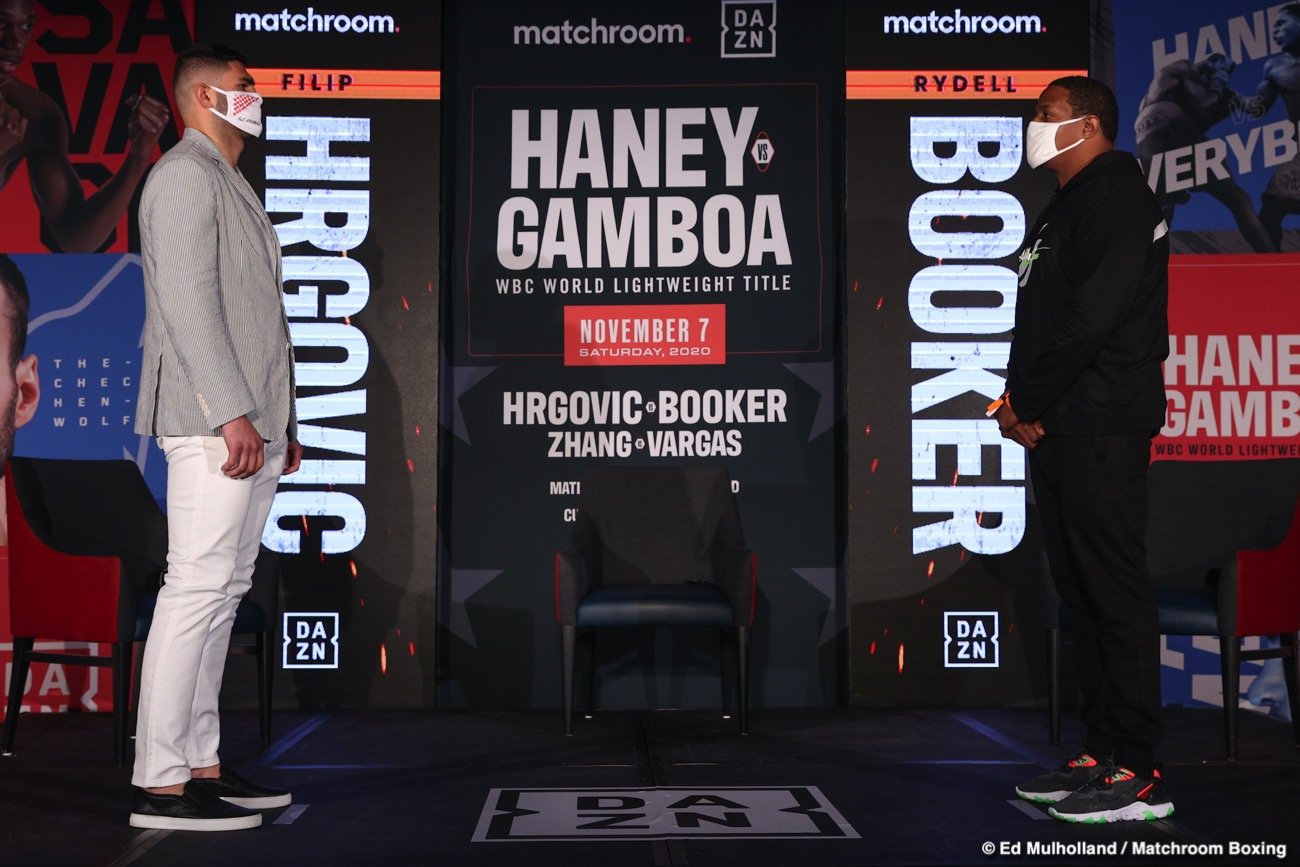 ‘El Animal’ has declared he “will not be friends” with Rydell Booker and that he aims “to finish him” when they meet in the ring this Saturday, insinuating he’ll be seeking another highlight reel finish against the man who went the distance with Kubrat Pulev last time out.

Coming face to face with Booker for the final time before fight night, Hrgovic said “I’m feeling very well, I want to thank my coach Pedro Diaz for preparing me very well and to the organizations Eddie Hearn and Team Sauerland and my manager. I’m feeling very good and happy to be here.”

“You’re going to see a great performance (tomorrow night), before the knockout I need to out box him, I will not just knock him out, I will out box first, and show my boxing ability.”

When asked who he would like next, ‘El Animal’ said “I want to come out on top, I want to become champion. Which way we’re going to go, no one knows, it is up to my management and promoter to match me up with the best in the division and I feel ready for everyone”.

Promoter Nisse Sauerland has previously described his fighter as “the best in the heavyweight division”, and stood by him again after the weigh in.

“He’s sensational” said Sauerland, who predicts a big 2021 for the Croatian powerhouse, “he’s light on his feet, heavy in his hands and when you combine his heart and his boxing intelligence you have a champion in the making. We believe he will impress again on Saturday night and it is only a matter of time before he is going for major honours.”

‘El Animal’ heads into the fight with a perfect record, 11 fights, 11 wins, 9 by way of huge knockout – a streak he says will continue into 2021. In his way, the man went the distance with Kubrat Pulev last time out, in a tough fight where he took rounds off the man next up for Anthony Joshua; Hrgovic says that won’t happen this time.

“He will not hear the final bell,” said the Croatian, “I want to get this job done early, and I believe I can do that. I hit harder than Kubrat Pulev; I move faster than him. I believe Rydell had some successes against Pulev; against me, he’ll have none.”

“I have sparred with him before, but this won’t be like sparring. The heavyweight division is fascinating right now, with a lot of big names – I am here to come out on top of those names.”

With eye-catching wins against Eric Molina and Alexandre Kartozia, the latter being an eye-watering knockout of the year contender, Hrgovic is one of the most talked-about fighters in the division Gypsy King Tyson Fury touting him as “a future World Champion.”

Promoter Nisse Sauerland is backing his fighter to continue his ruthless streak and go through the gears next year.

“It’s the heavyweight division, the most exciting, most discussed, most powerful division of them all, and Filip Hrgovic is making a charge to the top of it.

It isn’t just his power, but the way he can adapt; he’s big, tall, and strong, but he’s also quick and light on his feet. He’s quick on his feet, very dangerous, and has more heart than anyone in the division.

It’s only a matter of time before we see him causing real problems for the biggest guys out there on the world scene.”

What do you remember about sparring with Rydell Booker in Miami?
“He’s a skillful fighter; he has good technique and is slick. However, that was a sparring partner, and this is a real fight.”

Parker: I'll give Chisora a rematch if Hearn can make it happen

How important is it to you not just to win, but to finish Booker?

“We are friends, but on Saturday, we are not friends anymore. I want to finish. He performed great against Kubrat Pulev, but I want to make a statement and stop him.”

Give us your prediction for Saturday night:

“I can’t predict what is going to happen, what round he will go down, but I know for sure I will win on Saturday night.”

You’ve never been stopped; what’s your response to Hrgovic saying he’ll be the first:

“Everybody says it until they get in the ring. I know I’ll come to fight, I know Filip, and I look forward to Saturday.”

Are you going to approach the fight defensive first on Saturday night?

“No, I’ve changed my whole team, staff, and my preparations for this fight. My last coach was a straight defensive fighter, but that’s who I was, so I found someone who fit my style better.”

When you know a guy is coming to knock you out, how do you take advantage of that:

“Naturally, I’m a world-class boxer, so I use my boxing ability. I have a very high boxing IQ after doing this for 32 years. I know how to make adjustments; he has a good trainer, but I know what to expect.”