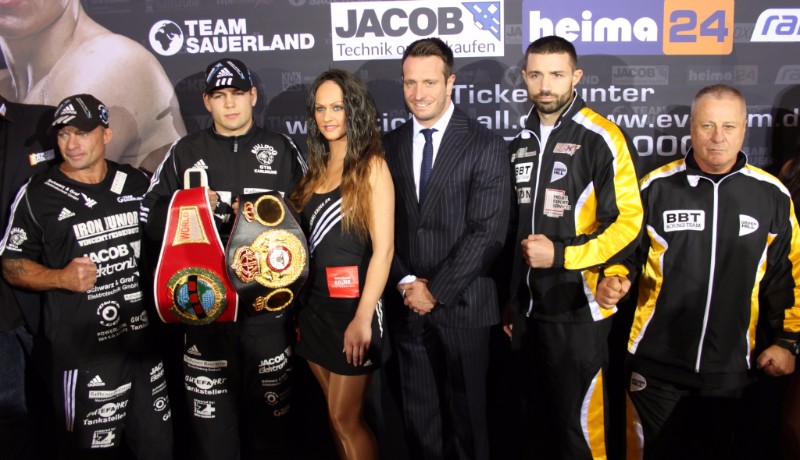 WBA interim super middleweight champion Vincent Feigenbutz (20-1, 19 KOs) will be taking a risky fight against #13 WBA Giovanni De Carolis (23-5, 11 KOs) this Saturday night on October 17th at the DM-Arena, Karlsruhe, Baden-Württemberg, Germany. It wouldn’t be a risky fight for some of the more established and talented 168lb fighters in the division like Arthur Abraham, Badou Jack, James DeGale and Andre Dirrell, but it’s a risky fight for the 20-year-old Feigenbutz, because he’s so raw at this point in his career.

Feigenbutz is still more like an amateur than an actual pro fighter. Yeah, Feigenbutz recently won the World Boxing Association WBA interim super middleweight title last July, but he did it by beating a mediocre fighter in Mauricio Reynoso by a 3rd round knockout. Reynoso, who will never be mistaken for a world beater, was able to nail Feigenbutz repeatedly with nice shots while he was coming in.

If not for Feigenbutz’s punching power, he likely would have lost the fight. On Saturday, Feigenbutz will be taking a step up in class against the 31-year-old De Carolis, who has been beaten only once in the last five years in losing to Abraham by a 12 round decision in 2013. Feigenbutz will likely win the fight, but I expect him to take a lot of hard shots and wind up getting exposed. Feigenbutz needs some serious help with his defense, and I don’t think he’s going to be getting that help anytime soon.

There’s a lot of hype surrounding Feigenbutz by the media in Germany, as they believe that he’s going to wind up as one of the great champions. I think he’s being pushed too fast by his promoters, and I can see them miserable when he gets blasted out by the likes of the winner of the Felix Sturm vs. Fedor Chudinov fight.

I honestly can’t see Feigenbutz beating either of them. He’s a good decent prospect, but he’s not ready for fighters of that class in my view. If Sauerland throws Feigenbutz in the ring with Sturm or Chudinov, he’s going to take a beating and be sent home a sad loser.

I think the 5’10 ½” Feigenbutz needs to training wheels to kept on for another three to four years so that he can learn the game properly before facing the top fighters. I also think he needs to move down to middleweight, because he’s way too small to be fighting at super middleweight. Feigenbutz looks to be about the same height and size as Gennady Golovkin, and that’s just too small for the 168lb division.

If you throw Feigenbutz in the ring with the bigger super middleweights like James DeGale, Badou Jack and Andre Dirrell, he’s going to get his ears boxed off. Yes, I know that 5’9” Arthur Abraham holds down the WBO super middleweight title, but I see Abraham as a paper champion holding down a title in that walled off part of the 168lb division.

Abraham hasn’t been fighting the quality fighters since he was chased out of the super six tournament four years ago. Look at the awful opposition Abraham has faced in the last 4 years. If Abraham had to go through the likes of Dirrell, Badou Jack, Gilberto Ramirez or DeGale to win his WBO title, he’d still be just a contender. Abraham is too small for the super middleweight division, and I believe that Feigenbutz is too small too.

Right now, I see Feigenbutz is going nowhere with his career. He’s just a guy that has been fed a lot of poor opponents to make him look better than he is. Believe me, once Feigenbutz gets put in with someone good, he’s going to get whipped badly and his promoters are going to be crying crocodile tears wondering how they can fix him.

The badly flawed Feigenbutz needs too much work right now to get him to the upper echelon of the division. If it was me, I’d take a big broom and sweep out his entire training team from the gym, and then look to get him some good trainers. I’d start matching him with better opposition too. He’s not going to go anywhere if he keeps getting fed fringe level fighters and 2nd tier guys.