On April 29th in Las Vegas, two sons of former world heavyweight champions will collide. Hasim Rahman Jr and McKenzie Morrison will shoot it out in a “next generation” affair. An interesting fight, due in large part to the name factor – Hasim “Rock” Rahman and Tommy Morrison both having been exiting, powerful heavyweights – this fight is also a clash of unbeaten fighters.

Here, Rahman Jr kindly takes time to speak about the fight and his career with ESB:

Q: Due to the name factor alone, your upcoming fight with Morrison has got a lot of buzz around it. When did the fight first get offered to you?

Hasim Rahman Jr: “I first heard about the fight in February, so we’ve been getting ready for quite a few weeks. We’re both ready, I think it’s going to be an exciting match-up, and for me it’s beyond an honor to be able to represent my family in this fight. I’m ready for war.”

Q: Both your dads were great fighters of course. How much do you know about McKenzie Morrison – have you ever sparred him or met him?

H.R: “I’ve never sparred McKenzie; I’ve just looked at what there is of him online and on video. He’s tough, he has good footwork, he has a good boxing IQ, I think he has good stamina and a very good punch output. It all makes for a great fight.”

Q: “For the fans who haven’t yet seen you fight, how would you describe your style?

Q: You’re both unbeaten and the fight is on a big stage in Vegas. Will the fight get good TV coverage?

Q: When did you last fight, and what is your record?

Q: What are you hoping a win over Morrison will lead you to?

H.R: “Honestly, I’m not looking forward to what comes after this fight, I’m strictly focused on McKenzie and I’m training as if this is my last fight. This is for all the marbles; this is do or die. So I’m not looking past this fight. I’m so focused on what’s going to happen on April 29th. April 30th I’ll have a better idea of where I wanna go. I’ve been in boxing my whole life so I know better than to be looking at the next fight. This is a huge fight on my plate.”

Q: Is your dad your trainer?

H.R: “My father has been my trainer my whole life. With that being said, he’s had a pro career and he hasn’t been my ‘hands on’ trainer but he’s always put me in the best hands in terms of trainers in boxing. For example, my first trainer was Emanuel Steward. Another example, after I graduated, I didn’t go to a regular college; I got a scholarship to go to the US OAC, the Olympic program, and I trained with Al Mitchell. So I’ve always been surrounded by the best in the game. There’s a plethora of coaches that have helped mould me to what I can do in the ring today. But today my trainer is Joel Judah, who I’ve been with for the past year. So as the father of Zab Judah, a six-time world champion, he definitely knows what he’s talking about; he’s over 50 years in the game. I have a lot of confidence in my corner.”

Q: That’s some list of trainers. You must have learnt so much.

H.R: Yeah, I have a plethora of trainers who have made me what I am today, like I said, Emanuel Steward, Al Mitchell, and Calvin Ford, Barry Hunter, Pernell Whitaker, Andy Lee, Kenny Adams, Eddie Mustafa Muhammad, Kenny Ellis, Roger Mayweather, Floyd Mayweather Jr, Mike McCallum, Chris Byrd, Bones Adams. These are all people who have had a serious impact on me so shout out to those guys and sorry to anyone I may have left out.”

Q: So far as a pro, who has given you your toughest fight?

H.R: “(long pause). That’s a good question. I would probably say my fight against Alejandro Torres, but it wasn’t because of him, it was because of the ring. The entire middle of the ring was soaking wet, so as soon as I stepped on it I would slip. So I had to fight the entire fight on the outside. I couldn’t go to his corner because his corner was drenched and soaking wet, and fighting in a foreign country, you can’t afford any mistakes. If I would have slipped, I’m pretty sure they would’ve called it a knockdown. So I think that was my most difficult experience as a pro, having to adapt in the moment.”

Q: Are you thinking the Morrison fight could be your toughest fight?

H.R: “I believe this will be my toughest fight, definitely. I know McKenzie has a legacy to fulfil just like I have a legacy to fulfil. This is not gonna be easy. He’s not gonna show up and disappoint his people just like I’m not gonna show up and disappoint my people. I know it’s gonna be fireworks. I know he’s got a lot to prove, just like myself. We’re both gonna get in there and put our best foot forward.”

Q: Boxing juniors have it tougher in a way, because of the expectations. Do you agree?

H.R: “It’s a gift and a curse, that’s the best way to describe it. The pressure is there, there’s no denying that. It’s all about how you deal with the pressure – pressure can bust pipes. I really believe that no matter the pressure……you don’t think Muhammad Ali was under pressure? You don’t think Floyd Mayweather was under pressure? Sugar Ray Leonard, Hasim Rahman, Lennox Lewis, Tommy Morrison? All these guys were under pressure, a different kind of pressure, but they were under pressure and it’s all about what you do with the pressure. With this fight, for the first time in boxing history we’ve got two sons of heavyweight champions fighting. Now, this isn’t the first time two children of heavyweight champions have fought, because there was Laila Ali and Jacqui Frazier who fought way back when. But this is a new spin, two sons of former heavyweight champions are fighting and I think that we both bring an enormous amount to the table. I think it’s gonna be a great fight.”

Q: Just talking about your dad. He went 1-1 with Lennox Lewis of course, should they have had a rubber-match?

H.R: “Well, a lot of people don’t know this, but my father was the number-one contender for the WBC title when Lennox retired. So the trilogy was coming but Lennox – who I think is the greatest heavyweight champ to ever do it – he decided to step away.”

Q: Lennox was no doubt great, even if Oliver McCall also beat him; although he did get back up from that knockdown, whereas he never got up when your dad hit him…….

Q: Exactly. Have you inherited your dad’s massive right hand? Is your right hand your best punch?

Q: Obviously the win is the most important thing, but would you really like a KO win over Morrison, to make a statement?

H.R: “I pray for victory and health, that’s it. However it comes, that’s up to Allah. As long as I have my hand raised and me and my opponent are healthy, I’m all good with that. Thank you for the interview. I have been an avid fan of Eastside Boxing since I was a young teenager. So that shows you how long I’ve been around. Now I’m looking to make the boxing community proud.” 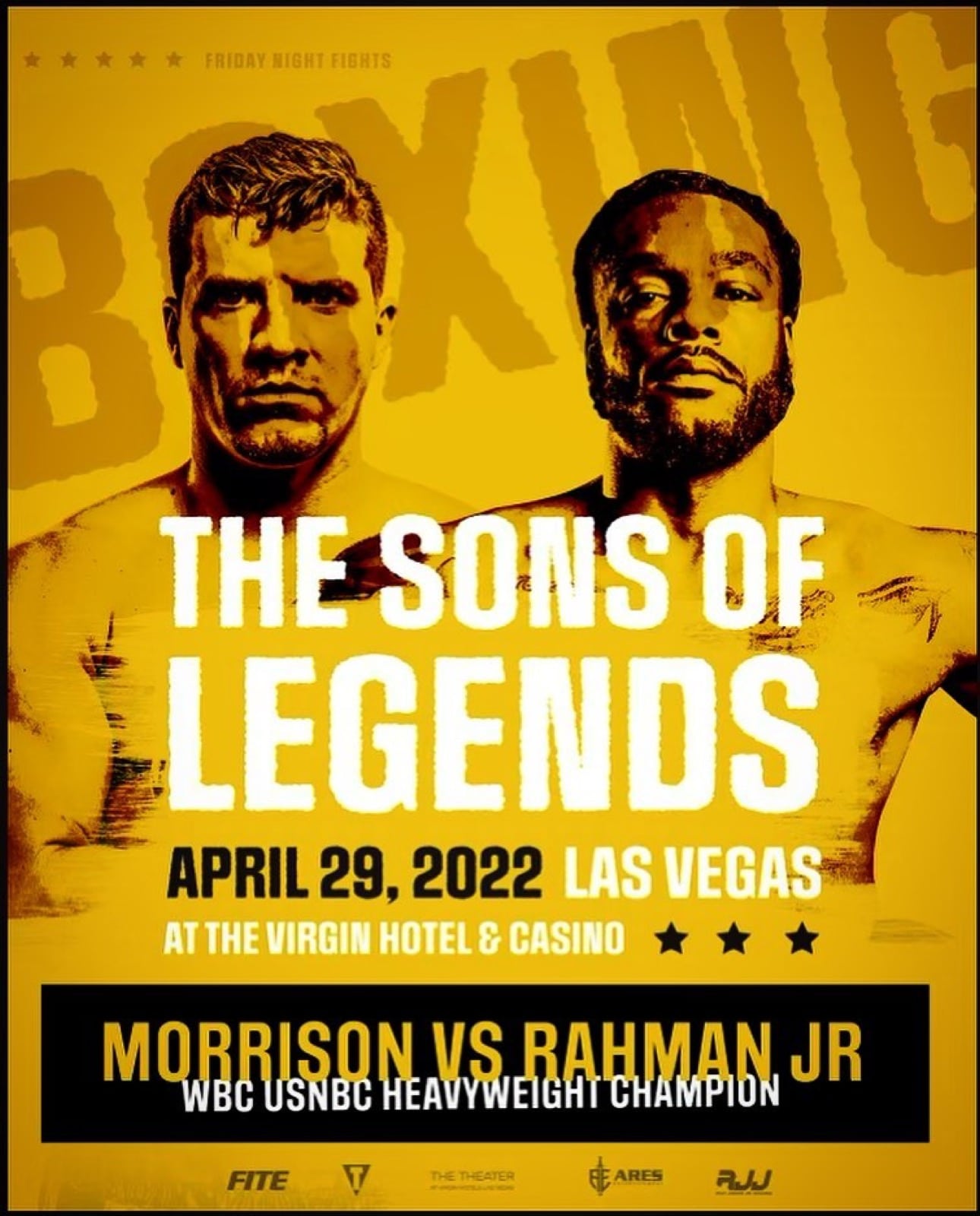