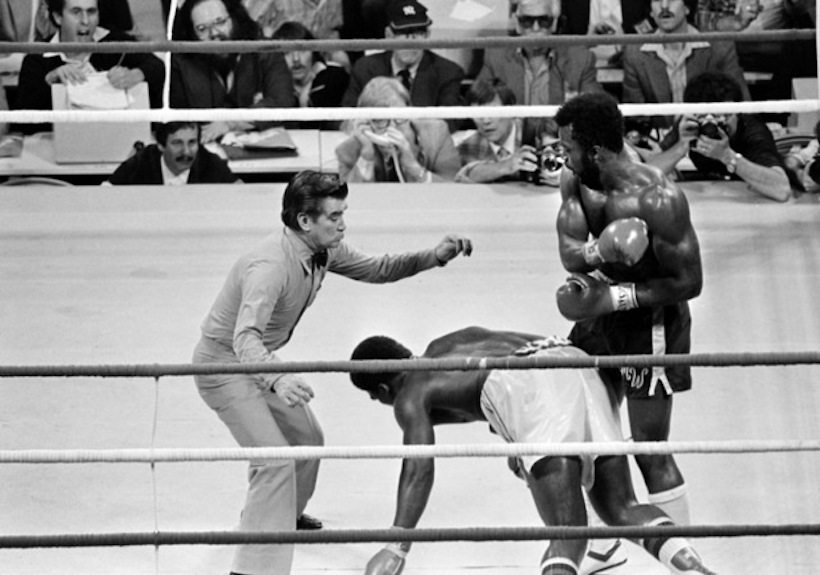 Former WBA heavyweight champ Mike Weaver gave us perhaps the most shocking and memorable KO of the 1980s with his desperate, come from behind knockout of defending champ John Tate in March of 1980. It was something right out of a Hollywood script. Weaver, one of the most unlikely heavyweight champions, looked to be perhaps set for a long reign; retaining his belt twice, with wins over Gerrie Coetzee and James Tillis.

But Weaver was robbed of his belt, in the opinion of many, when he was stopped, prematurely, by Michael Dokes in his third defence, later boxing to a controversial draw with Dokes. But Weaver is happy today, happy that he was world champion and that he is remembered by the fans.

Here the incredibly modest and down to earth Weaver speaks about his eventful, up and down career:

Q: It’s a real pleasure to be able to speak with you, champ – a heavyweight who really did fight in a great era. First of all, what did you think way back when, when they changed the distance from 15 rounds down to 12?

Mike Weaver: “It’s my pleasure. Yes, I felt it was a bad thing, for a fighter like me, who was a slow starter and always came on late and really got going in the later rounds of a fight. I much preferred the 15 round distance to the 12.”

Q: And of course – and I guess you know what I’m going to ask you – your whole career would have been different, more than likely, if the fight you had with John Tate had been a 12-rounder. You famously knocked him out in the 15th and final round with just seconds remaining.

M.W: “Yeah, I think about that ALL the time! All the time. My whole career, my life, would have been so different. I never would have been world champion. I know they said they changed the distance [from 15 rounds to 12] for safety reasons, after the sad death of the guy, Kim Duk-Koo (who passed away from injuries sustained in his November 1982 fight with Ray Mancini), but for me, I was way better off in a 15 round fight.”

Q: Can you believe you fight with Tate will be 40 years old later this month, on the 31st?

M.W: “Wow! (laughs) time goes so fast, too fast. Going into that fight, I had told everyone, ‘I’m going to knock John Tate out.’ But in the fight, I just couldn’t do anything. He wasn’t a hard puncher really, but he was a good boxer, physically strong, and I couldn’t get anything going. My corner said to me, after the 14th round, ‘well, you said you’d knock him out – go on and do it then!’ I prayed in the corner and I managed to do it. It was a dream come true.”

Q: Watching the fight for the first time, it’s hard to catch what happened. But of course you landed a perfect left hook to the head in close. Did you know as soon as it landed that Tate was gone for good?

M.W: “I knew that was it. He was tired and I knew I just needed one good punch to get the win. I knew he wasn’t getting up!”

Q: As you know, the Tate story is a very sad one, with him never recovering from the loss to you, being knocked out again, and then getting into drugs and passing away at just 43.

M.W: “Yes, it is a sad story and I did feel sorry for him. Back then, Bob Arum was saying John Tate was going to be one of the greatest heavyweights in history. He was fully expected to beat me and then he was going to fight Ali As a matter of fact, I never did see him or even talk to him again after our fight. I felt sorry for Tate when I read how he had got into drugs, was selling drugs and became homeless.”

Q: It really is a sad story. So why did you not get the Ali fight?

M.W: “Ali used to call me up, telling me he was gonna beat me, whup me, all that stuff. I just said to him, ‘we’ll see!’ But then he went and fought Larry Holmes instead. I would have beaten Ali. I was 28, he was 38. I had sparred him once, in 1972, and I would have won the fight had it happened. In fact, years later, Angelo Dundee said to me that the fight never happened because I would have killed Ali!”

Q: Before you became champ, you had a great fight with Holmes. You lost but you had Larry in all kinds of trouble, and you knocked him down in the fourth, only for the ref to call it a slip?

M.W: “Yeah, the fourth round, I knocked him down. But Holmes showed his greatness in that fight. He had wanted to have a bet with my manager before the fight, for a $million, that he would knock me out in the fourth round. But I thanked Homes for the opportunity and we became friendly. He actually called me years after the fight and he told me I was whipping his butt. It was a great fight.”

Q: As you know, a lot of the big names from your era – an era that was called “The Lost Generation Of Heavyweights” – have died and have suffered tragedy. Do you look back with sadness on this?

M.W: “I do look back with sadness, yes. A lot of my personal memories, of fighters I fought and knew, are sad. A lot of those guys are dead, as you say. But myself, I never smoked, never got into any drugs at all. I think a lot of those guys, it was maybe a case of [them] getting too much cash too soon.”

Q: You still look to be in great shape. Do you still train? And do you follow the heavyweights of today?

M.W: “I do still train but I recently pulled my hamstring. I did an exhibition with a guy, who is 37, and I’m 68! Anyway, I pulled a muscle there. I do still train when I can. I watch the big names. I watched Tyson Fury and Deontay Wilder.”

M.W: “I would have tried going to the body, certainly. I would have got in close, not stayed outside and tried to box these guys. I wouldn’t have head-hunted with them. But I’m just glad and happy that I became world champion. I had a win some, lose some record and nobody ever thought I’d become champion. I feel I was robbed of my title in the Dokes fight. Matter of fact, a friend of mine told me before the fight how they would try and stop the fight the first chance they could. But that win over Tate is way up there for me in terms of my greatest fight. I trained in L.A for the fight and there were a few good fighters training there at that time who were expected to go on to do big things. But they never did. I’m so grateful that I did.”