Talking Boxing With Craig Houk; President Of The Indiana Boxing Hall Of Fame

Plenty of fight fans are familiar with Craig Houk; both the name and the face. A former pro who had over 100 fights, Houk is often seen at big boxing events – such as this past weekend’s Atlantic City Boxing Hall of Fame – and he is also the president of The Indiana Boxing Hall of Fame. Houk is always there, supporting the champs, taking photos with them.

Here, having got back home from the Atlantic City extravaganza, Craig kindly talks with ESB.

Q: How was the Hall of Fame in A.C? It must have been a blast!

Craig Houk: “Oh yeah. You go in there and you get to hang out with some of the greatest fighters to ever live. I was hanging out with two-time heavyweight champion Tim Witherspoon. I walked over and there was Ray Mercer, and then Al Cole, and then Roberto Duran! It’s all kind of surreal. Great stuff.”

Q: Duran is your favourite fighter?

C.H: “He’s probably one of my favourites, because of what he achieved. You know, he started off his career at 82-1, you know what I’m saying? People can say what they want about him, but he jumped up two weight divisions and he beat the greatest, Sugar Ray Leonard. So you have to give him credit. He’s one of my favourites, I’m also a big Michael Spinks fan. I’m a [Felix] Trinidad fan, all those guys. So I go to the events and I make sure I get my picture and I give them their just-due.”

Q: You sure have met so many great fighters. Is there anyone you have not met yet as far as your heroes go?

C.H: “I think I’ve seen them all, but there’s always one that pops up. For example, when you go to The Nevada Boxing Hall of Fame. I went there and that was the first time I got to see Miguel Cotto. You never know; you hang out with James Toney. It’s not easy (laughs).”

Q: Have you ever been starstruck when meeting any fighters?

C.H: “Yeah, I think we all have. I’ll be honest with you. You kinda do get starstruck. You’ve got to think about all the greats, all the great fights they had. It’s easy to get overwhelmed. I must tell you, I really enjoyed meeting Barry McGuigan. That was at the Don King show, with Trevor Bryan against [Daniel] Dubois. That was Don’s $3.1 million title fight. That cost him quite a bit of money, for sure. But Don’s a player and you can’t play the game and not roll snake eyes every once in a while. I fought for Don King in 1995, in Chicago. There’s always going to be that stigma with those guys, you know? You have to form your own opinion. When people blow all their money, should they blame themselves? Let’s say you make $2 million and I make $2 million off of you, and then I make another $2 million in profit, whether that’s wrong or right. You still have $2 million, and if you blow that, whose fault is it?”

Q: Yeah, Chuck Wepner pretty much said the same thing about King. Chuck actually said that a lot of the guys who say King robbed them are “cry babies.”

C.H: “You have to take your own responsibility and say you messed up or whatever. You have to just do what you can with what you have. Who would you say the greatest ever UK fighter is? Maybe Joe Calzaghe, who had the best record at 46-0?

Q: That’s a tough one. I’d maybe go back in time and perhaps say Bob Fitzsimmons.

C.H: “You’re talking about the third heavyweight champion of the world (laughs). The history of boxing, that’s what I’m after. You know, Buster Douglas had the biggest upset in boxing history, that’s a fact.”

Q: Talking about your career, you had 106 pro fights. You faced how many world champions?

C.H: “Well, I had 47 fights in the state of Indiana, which is the most fights in Indiana in boxing history. That’s probably why I belong in The Indiana Boxing Hall of Fame. And I was a ticket draw, people liked me and wanted to come see me fight. I fought Joey Gamache, Julio Cesar Chavez, Meldrick Taylor, Hector Camacho.”

Q: You dropped Camacho one time?

C.H: “Oh, that was a thrill. That was the biggest thrill of my career. I didn’t know the impact it was going to have, not until after I was finished with the game. That was the second time I fought Camacho. I knew he was gonna jump on me the way he did, and what happened was, he dropped his hands. He came to me, I threw a right hand and he kinda ducked and then he fell right into the left hook. When I dropped him I could feel it in my shoulder. I knew I’d caught him. He was hurt. Unfortunately, I’d never had a legend down before and I couldn’t keep my punches straight. If I had, I might have caught him one more time. But I tried to throw wide haymakers and unfortunately for me, you only have maybe five seconds [to end the fight] with a guy like that. But I was able to drop Camacho and not many people can say that.”

Q: Who was the best fighter you ever faced?

C.H: “Personally, Chavez was the best. He had the most power and he faked me out with his left hook. It looked like it was going to be a jab and he turned it into a hook. He caught me right on the chin. The fastest hands, I would have to give it to Meldrick Taylor. The best southpaw I fought, with the quickest hands, was Camacho. But I fought Taylor in 1994 and he was still fast. He maybe had the fastest hands ever, and he had Chavez beat. He had him beat. That’s gotta be hard.”

Q: There’s not too many people walking around who fought Chavez, Camacho and Taylor. And again, you had all those fights and you are in great shape, mentally and physically. Is that just good luck?

C.H: “It’s been a blessing. I’ll be honest with you, a lot of fighters, they fight for the money and they want that payday one more time. At some point, you have to stop. I don’t think anyone really knows when it’s [their ring career] said and done, but I was getting past my day and I began struggling with the kids I was sparring with. I couldn’t pull the trigger like I used to. If you get to that point and want to carry on, that’s up to you. But It was a great career I had. I’ve enjoyed going around the world seeing everybody. Getting to see people, that’s the thing I most enjoy. That’s the best thing I do, meeting fighters. I mean, getting a chance to hang out with Roberto Duran! That doesn’t happen every day.”

Q: It’s been great speaking with you. When is the next Indiana Boxing Hall of Fame ceremony? 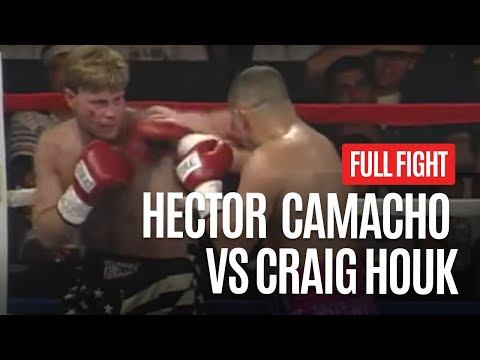