Well, that was pretty ugly, just as so many people feared it would be. The sight of 44 year old MMA legend Vitor Belfort taking out living legend Evander Holyfield in a little over a minute-and-a-half was also incredibly sad for all the millions of “Real Deal” fans who recall the epic nights this once-great fighter gave us at both cruiserweight and heavyweight. Holyfield clearly has nothing left aside from his still-impressive physique and his stubbornness.

For despite being bowled over and stopped by Belfort, Holyfield, who will turn 59 next month, is still refusing to be realistic. Not only is Holyfield insisting last night’s bout was stopped too soon, he is also harbouring ideas of getting into the ring once again – against Mike Tyson. 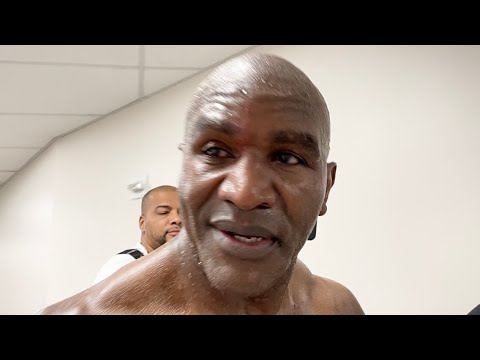 “Of course I would,” a beaten Holyfield said when asked if he’d still like to fight Tyson again. “The thing is, there wasn’t a shot that hurt me real bad. He was strong, and it was a shot that knocked me off balance. Then he went to close the show. No, I’m not hurt. It’s kind of sad. I think it was a bad call. The referee shouldn’t have stopped the fight that quick.”

Holyfield is right on one thing: it was indeed sad last night. Sad to see. It really is awful to think what might have happened had the short fight been permitted to go on a little longer. As it is, Holyfield simply has to retire and stay retired now. Last night’s bout was heavily criticised, and with good reason. If anyone sanctioned another Holyfield fight it would be nothing short of criminal.

Let us remember Holyfield for all the great nights he gave us. Last night’s farce should be wiped from the mind as swiftly as is possible. There will, however, be more freak show type fights to some, with Belfort having called out Jake Paul for a ‘winner take all’ fight. Ugh! Pay to see that one if you like but do not call yourself a boxing fan.