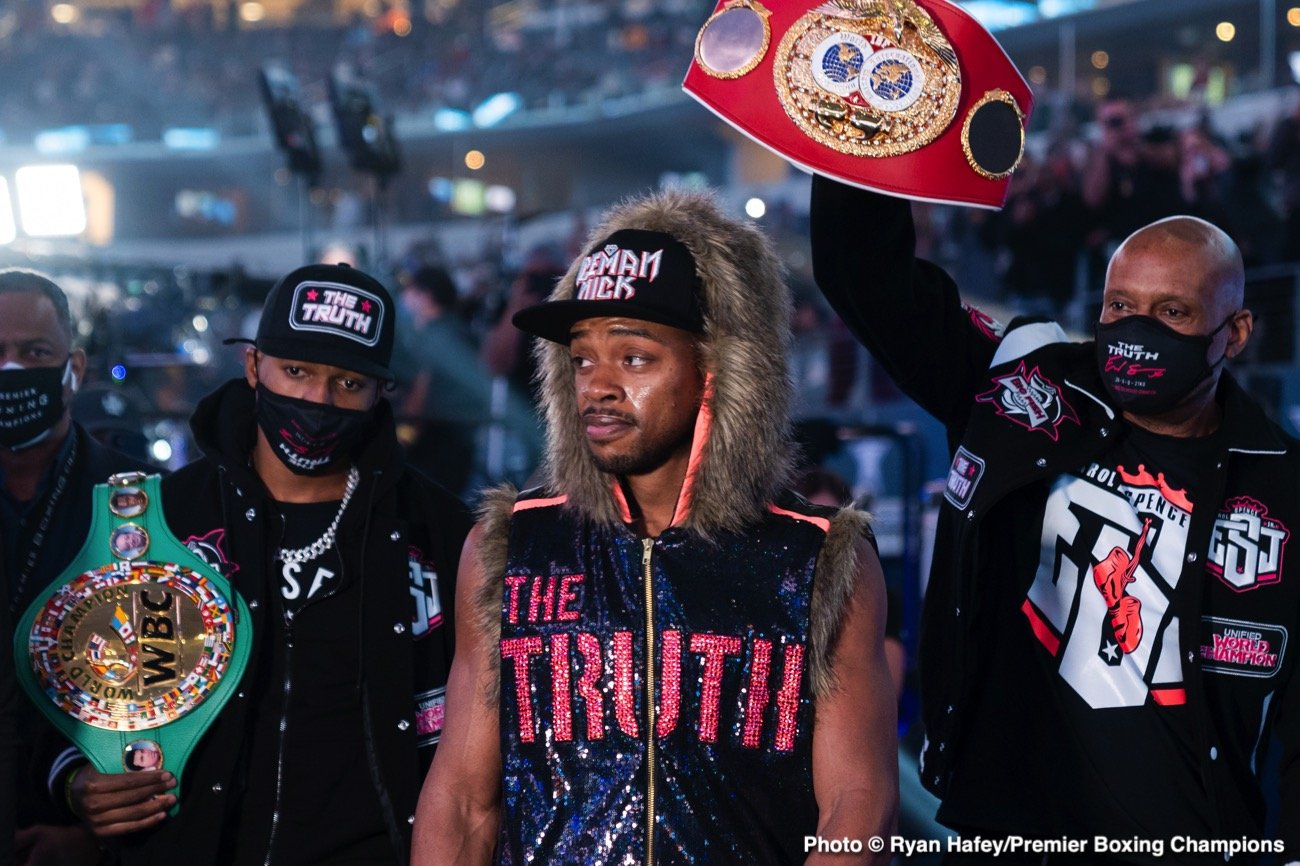 Errol Spence Jr would like to fight Terence Crawford soon after he finishes his next fight against Manny Pacquiao on August 21, but he’s not going to wait forever for the Top Rank promoted fighter.

IBF/WBC welterweight champion Spence has been trying to get a fight against Crawford sometime, but it’s failed to happen due to promotional issues.

Fans would like to see Spence and Crawford fight before the two of them get old and are no longer in their primes. We saw that happen with the Floyd Mayweather Jr vs. Manny Pacquiao mega-fight in 2015.

Although the match made a lot of money for both fighters, it wasn’t an entertaining fight because the skills of both guys had eroded due to age. If Mayweather had fought Pacquiao six years earlier, we might have seen a different outcome.

“Once I get that belt, like I told Al (Haymon), I want that fight with Terence Crawford,” said Spence to Barbershop Conversations. “But if it don’t happen, I’ll probably just move up to 154.”

If Spence and Crawford were to fight, it would prove once and for all who the #1 guy is in the 147-lb division. Right now, some boxing fans believe Crawford is the guy, but they’re guessing because he hasn’t faced a quality welterweight yet since moving up to 147 in 2018.

Crawford’s opposition since moving up to 147:

You can argue that Crawford fought better opposition when he was fighting at 135 and 140 than at 147. Spence said the other day that he thinks Shawn Porter would beat Crawford.

. When you see Arum opting to match Crawford against Brook, Khan, and Kavaliauskas instead of Porter, that tells you a lot about how disinterested he in making that Crawford-Porter fight.

Once Spence is at 154, it’s not likely he’ll choose to drain himself down to get to 147 to fight Crawford the way that Brook recently did.

Spence has made too much money for him to put himself in a position where he’s giving Crawford a huge weight advantage over him.