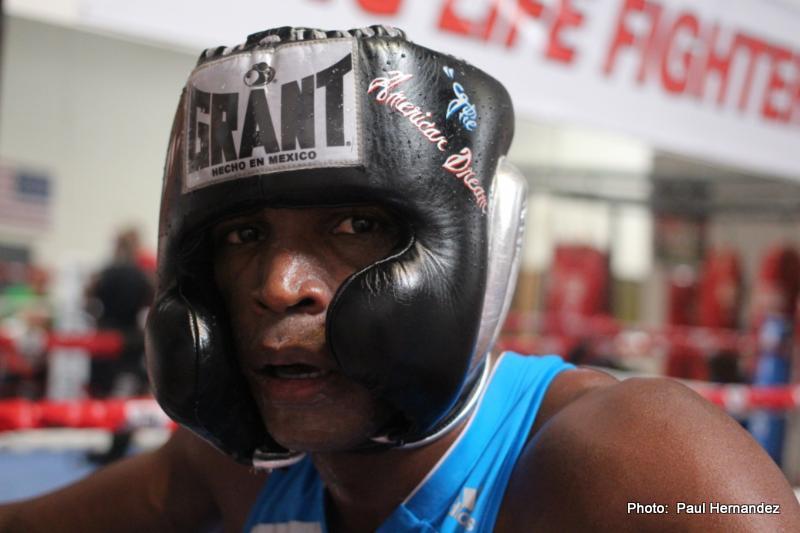 LAS VEGAS (June 30, 2014) — With less than two weeks to go until his SHOWTIME PPV® showdown with Canelo Alvarez (43-1-1, 31 KOs), WBA Super Welterweight World Champion Erislandy “The American Dream” Lara (19-1-2, 12 KOs) is looking sensational in sparring and running on all cylinders.

“My sparring partners are pushing me with numerous styles and I’m adapting to all of them comfortably,” Lara said. “I told them to come extra hard to prepare me for the pressure Canelo is going to bring. I feel great and my timing is right on.

“I know Canelo is training hard for this fight, as am I, but unfortunately for him, there is nothing he can do to surprise me. He’s going to find out on July 12 that I’m the superior fighter. His insecurities as a fighter will surface on fight night — that I can guarantee.”

“Honor & Glory: Canelo vs. Lara” a 12-round junior middleweight fight taking place Saturday, July 12 at the MGM Grand Garden Arena in Las Vegas, is promoted by Golden Boy Promotions and Canelo Promotions and sponsored by Corona and AT&T. In the co-main event Abner Mares returns to face Puerto Rico’s Jonathan Oquendo in a 10-round featherweight bout. In the SHOWTIME PPV opening bout, Johan Perez defends his interim WBA World Junior Welterweight Title against Mauricio Herrera in a 12-round match up. Also featured, Juan Manuel “JuanMa” Lopez meets Francisco “El Bandido” Vargas of Mexico in a 10-round bout for the WBO International Super Featherweight Title.

The event will be produced and distributed live by SHOWTIME PPV beginning at 9 p.m. ET/6 p.m. PT. The event can be heard in Spanish using secondary audio programming (SAP). For information visit www.SHO.com/Sports. Canelo vs. Lara will be shown on the big screen in movie theaters across the country via Fathom Events. Information will be available at www.fathomevents.com.