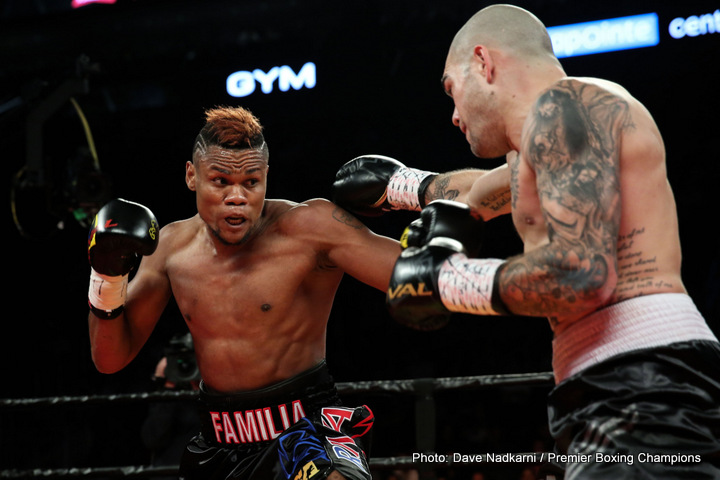 The “GYM 2016-2017 BOXING SERIES” at the Montreal Casino Cabaret, a PRESENTATION OF MISE-O-JEU, IN COLLABORATION WITH VIDEOTRON, will host its second card of the 2016 season and 50th since 2004 ON Saturday, December 10. The World Boxing Council (WBC) Silver champion and WBC #1 light heavyweight contender, Eleider “Storm” Alvarez (20-0, 10 KOs), will face tough-as-nail Polish fighter Norbert “Noras” Dabrowski (19-5-1, 7 KOs).

Dabrowski, a southpaw who has never lost by knockout during his career, will come to Montreal to try and spoil the party. In his last outing, he shattered the perfect record of his countryman. Marek Matyja (11-0).

“Storm” then faced strong opposition, Paraguayan slugger Isidro Ranoni Prieto (24-0-3), August 15, 2015, at the Bell Centre in Montreal. After a tough brawl, the Montreal’s adoptive son Alvarez was declared the winner by unanimous decision.

Alvarez went on to beat top contender Isaac Chilemba (24-2-2), of Malawi, in a WBC light heavyweight elimination bout November 28, 2015, by way of a majority decision, at the Videotron Centre in Quebec City,

“I am happy to come back to the Montreal Casino, where I had my first three pro fights,” Alvarez said. “I asked my team to keep me active and to also evaluate what I do well and what I do badly against southpaws. I want to be fully ready for Adonis Stevenson and become the first Colombian light heavyweight champion of the world!,”

This coming fight will most likely be Alvarez’ last outing before fighting Stevenson, the WBC light heavyweight world champion in 2017. Dabrowski is a strong and durable southpaw, who will be an excellent test for Alvarez before he faces the champion.

“It was at the insistence of his team that Alvarez will jump in the ring on December 10,” GYM president Yvon Michel noted.

“Waiting for his world title fight, Eleider is not afraid to risk his lofty position in the rankings to give himself the best conditions for success when his time comes. Dabrowski has never been stopped and gave the # 2 WBO ranked fighter all he could handle last year. He is also a southpaw. It is logical to anticipate a captivating fight on December 10th. We have an exciting card for our 50th event at the Montreal Casino. The boxing fans will be the big winners!”

A real challenge for Dicaire
The charismatic Marie-Eve Dicaire (5-0, 0 KOs), of St-Eustache, Canada, will fight in the co-main event of the evening. She will face the biggest challenge of his career against former North American Boxing Federation (NABF) welterweight champion, Mexican Paty “La Elegante” Ramirez (11-2, 5 KOs).

Marie-Eve will look to continue her strong momentum in the pro ranks. In her last outing (Oct. 20), she delivered a stunning performance, also at the Montreal Casino Cabaret, where she clearly feels at home. She then defeated Mexican Karla Zamora (3-2-0) by unanimous decision.

If she is successful, it will be her last six-round fight before moving to an eight- round bouts in February.

“It is a close date for me since I fought October 20 but I am coming back from a week of vacation,” Dicaire remarked. “So, I am fully ready to start my training camp. My last fight was a war that the crowd really liked, where I gave a little more while neglecting my defense. For this bout, I am sure that I will be able to show my real potential.”

“In only her fifth bout,” Michel added, “Marie-Eve was already world ranked. She will eventually fight for a world title having everything it takes to do so. Also, women’s boxing has boomed lately, since females can box in the Olympic Games.”

Lafrenière and Phinn also in action
If the Alvarez and Dicaire fights weren’t enough to guarantee a very entertaining evening Dec. 10, also scheduled to fight on the card are two very popular boxers in Quebec, Francis
Lafrenière and Shakeel Phinn.

He first became Canadian middleweight champion June 28, 2014, in Lachine, by winning a unanimous decision over Paul Bzdel (5-4-1) from Saskatchewan. He then won his IBF International middleweight title in a furious fight last January 30 against Quebecer Renan St-Juste (26-4-1) at the Bell Centre, which many consider the Fight of the Year.

Lafrenière is currently on a nine-fight win streak. He counts on extending it to 10 on Dec. 10. His opponent will be announced within days.

“I had my first pro fight here at the Montreal Casino and I had a draw,” the optimistic Lafrenière commented. “Thanks to GYM for giving me the opportunity for redemption. I had a solid brawl with Renan St-Juste, but I am ready to deliver another one this bout.”

In his last outing, on October 15 in New Brunswick, Phinn knocked out New Brunswick fighter Tom Vautour (2-0). It will also be his second appearance at the Montreal Casino Cabaret this year having defeated Mexican opponent Jaudiel Zepeda (12-14-1) this past May 24.

Lucian Bute and Christian Ganescu protégés, Dario Bredicean (10-0, 3 KOs) and Bruno Bredicean (5-0, 1 KOs), plus Patrice Volny (3-0, 2 KOs) from Montreal, will also be in action against opponents to be announced.

The galas at the Casino
“GYM BOXING SERIES AT THE CASINO DE MONTRÉAL” is a formula that has been very popular from 2005 to 2010. During this period, no less than nine participants eventually became world champions. For its 13th year, GYM repeated this formula where the proximity of the action, the warm and electrifying ambiance, as the intensity of the fights, provide a unique experience.

In addition, at each gala, you will receive a private invitation to mingle with the athletes and observers in a bar of the Casino exclusively for this purpose.

December 10 will be the 50th event presented by GYM at the Montreal Casino.

The WBC super middleweight elimination bout between Otis Grant and Librado Andrade (April 8, 2006), and the spectacular clash between Herman Ngoudjo and Emanuel Augustus (Oct. 15, 2005) are among the best memories for Quebec boxing fans.