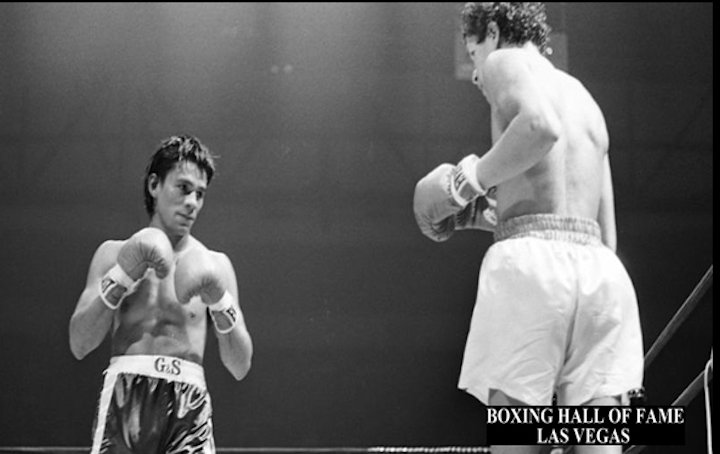 Exclusive interview by James Slater – 68 year old Edwin Viruet, who exited the ring with a fine 32-6-2(14) record, talks about one man and one man only whenever he recalls his boxing career. Roberto Duran, who Viruet insists he twice defeated only to be robbed, seems to constantly occupy the Puerto Rican-born New Yorker’s mind today.

Twice, the slick and clever Viruet fought Duran, only to drop a unanimous decision each time. Yet Viruet is adamant he was robbed – not only in that fight, but in a number of his other bouts against big names.

Here Edwin, who is always on the lookout for a young fighter to train, speaks with ESB from his home (or a gym nearby) in The Bronx:

Q: It’s fifty years since your pro debut: April 28th, 1969. You beat a guy named Azael Curet via decision. Do you remember the fight and were you nervous?

Edwin Viruet: “(laughs) Of course I remember, I remember all of my fights – I’m not punch drunk yet! No I wasn’t nervous, I was not nervous in any of my fights. I was given a gift from God and I was just born with it [the ability to box]. And when you are born with it, you never, ever lose it. Even right now, I can still do a little bit, and I’m nearly 70 years old! I’m in the gym right now. You know they called me The Puerto Rican Ali, and I was like Muhammad Ali. To fight like that, you need the body, the conditioning and the all-round ability. Like I say, it’s a gift.”

Q: You are known as one of the finest lower-weight fighters never to have won a world title…… (jumping in)

Q: You are of course also remembered for those two fights you had with Duran…..(jumping in again)

E.V: “I beat the s**t out of him both times. I played with him like he was my cupcake. They all say he’s this tough guy, the best lightweight ever. If he’s that then what am I? I’m the guy who laughed as I fought him. I’m the guy who frustrated him long before Sugar Ray Leonard did it – you see, when Duran moved up [in weight] he wasn’t the real Duran any longer; and it was sad seeing him beaten so bad by Thomas Hearns. But I met him when he was in his prime. He came over from Panama, supposedly fighting for his country, yet he only came here for the money. He beat Ken Buchanan, a friend of mine, who I trained with and sparred a whole lot – yet he hit him low, he cheated. How could they give him the world title after he did that!?

“I came out of that 15-round fight with Duran (in 1977) clean, you know what I mean by clean? I came out just as I went in. He was the one with the messed up face, all swollen. I hit him with lots of uppercuts, combinations. You have to be smart to fight Duran, and I was real smart – too smart for him. I loved to use feints, my footwork. I would act like I was hit and then come back. He would clinch, but as soon as he let go, I would hit him. I did it to him all night long. I was robbed in both fights, no doubt. I was robbed my whole career, that’s why I finally said “f**k it.

“Saoul Mamby (a draw in 1971), he was the toughest guy I ever fought, but I beat him and he never gave me a rematch. Alfredo Escalera, who I beat (by decision in ’71), he could easily have fought me again when he became world champion, even though he won it as a super-featherweight, but he wanted no part of it. I took a dive in my last fight (against Alvin Hayes in April of 1983). I wasn’t gonna be used no more, not by anyone. The [Edwin] Rosario loss, before my very last fight, I had diarrhoea and I was forced to fight, and that was a TV fight (Viruet being stopped in the third-round). I was so weak, eating only soup before that fight.”

Q: Experts do say Duran is the greatest lightweight ever. You disagree?

E.V: “He was a great fighter, no doubt, but I played with him. I played with him just like Ali played with Frazier. Ali and Carlos Ortiz, they are my idols; I learned so much from both of them. I sparred Ortiz and he told me I was good. That gave me all the confidence in the world. Ali, he only lost the first fight with Frazier, and do you know why? It was because he wouldn’t go to war, it was because he refused the draft. And I never truly lost to Duran. I beat all those guys – I beat the s**t out of [Wilfredo] Benitez, before he went crazy. No-one could touch me.”

Q: Talk about your fight with Esteban De Jesus, who you lost a split decision to in 1978, not long after the second fight you had with Duran.

E.V: “Jesus Christ, there’s another one! I played with him, yet those two [Duran and De Jesus] beat each other up (over three fights). And another thing: I had no trainer when I fought Duran and De Jesus. All I had was my brother, other than that I trained myself. De Jesus’ own brother actually came up to me and told me I had beaten his hero, that I had beaten his brother. But again, the system f***d me.”

Q: What do you think of Duran today, and have you seen him recently?

E.V: “You know, the past is past. I have nothing against him. The last time I saw him, it was just a case of ‘hello, goodbye.’ But I told him not to forget I beat him. He knows. He was fat when I last saw him, like a 200 pound bully. Me, I’m still in shape. I frustrated the hell out of him when we fought, and he knows it. I hit him in the ass and that sent him crazy. He couldn’t handle my footwork. Today, who boxes like I did? Where are the great trainers? Who uses feints the way I did? We were in the perfect century to be fighters.”