Fans may have heard by now the sad news that former two-weight king Eder Jofre has died, this at age 86. Jofre was absolutely one of the greats, the special ones – the magnificent. The single finest boxer from the country of Brazil, Jofre is, some say, the greatest bantamweight of them all. And Jofre also ruled at featherweight.

Tributes have been coming in since Eder’s death on early Sunday.

It’s tough writing an adequate tribute to a great fighter, one that did his stuff years before the trying writer was even born. Yet with even a limited knowledge of Jofre and his brilliance, some form of an appreciation was necessary.

Jofre was amazing as a young man, and he also enjoyed a reign as an “old man.” Jofre, an Olympian who was more suited to the pro game, went pro in 1957, this in Sao Paulo, and he went on to knock out Eloy Sanchez to become the NBA bantamweight champion in 1960. By this time, Jofre was 35-0-3. At age 24, Jofre went on to add the WBA, WBC and Ring Magazine titles to his collection, and he made eight title defences, with Jofre fighting all over the world, in America, the Philippines, Venezuela and Japan.

In 1965, Jofre lost a close, debatable decision to Fighting Harada, this in Japan, and Jofre lost the return, via a wider decision. Harada was the only man to ever defeat Jofre.

Jofre retired for three years, before coming back in 1969. Amazingly, at the age of 37, Jofre won the WBC featherweight title in 1973, when he defeated Jose Legra. Jofre went on to retain the title with a win over Vicente Saldivar, this his sole title defence. Jofre had an additional seven fights, all of them wins. Jofre retired with a superb 72-2-4(50) record in late 1976.

Before his death, Jofre was the oldest living world champion. He was inducted into The Hall of Fame in 1992. Jofre is ranked by Ring Magazine as the 85th greatest puncher of all-time. With the help of football genius Pele, Jofre made Brazil one of the proudest of all sporting countries. May he rest in peace. 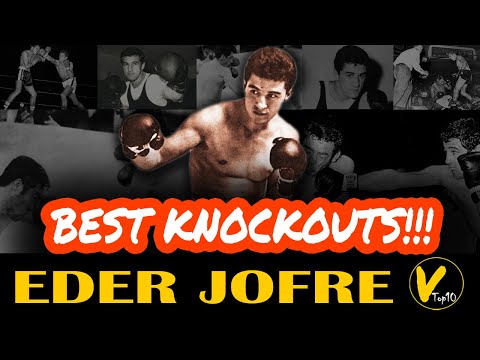