Eddie Hearn says that if Tyson Fury and Derek Chisora hadn’t already fought twice in two one-sided fights, it would be a good match-up for December 3rd.

The problem is that WBC heavyweight champion Fury (32-0-1, 23 KOs) has already fought journeyman Chisora (33-12, 23 KOs) twice and thrashed him both times.

Due to those two mismatches, the boxing public has little interest in the third fight between Fury and the 38-year-old Chisora.

On the True Geordie show, Fury claimed that 58,000 tickets had already been sold. What he didn’t say is that it’s likely that many of those tickets were purchased by ticket resellers.

It wouldn’t be surprising if a mere 10,000 tickets were bought by the fans because it’s such a terrible fight that it’s hard to imagine a fan wanting to purchase tickets and then go to the fight at Tottenham Hotspurs Stadium in London to witness the spectacle.

“It was difficult because Dereks my mate, and I’ve promoted his shows, so I didn’t want to criticize him,” said Eddie Hearn to Secondsout when asked if he felt tempted to criticize the Tyson Fury vs. Derek Chisora III trilogy when it was announced for December 3rd.

“That fight took eight weeks to close. So it took a long time to get there. I was pleased that Derek got the opportunity. I understand there’s no demand to see the [Fury vs. Chisora III] fight.

“I know Derek will give it his best, and I’m sure it’ll be entertaining. Just time, that’s all we wanted,” said Hearn when asked what it would take to get Fury vs. Anthony Joshua over the line so that it could be signed.

“A deadline was put on us, but Derek Chisora had three more weeks to conclude his deal, but that’s confusing. But that’s been and gone, and everything is done now, and we’ll see what happens in the future.

“AJ will be here this week to finalize his next move, and I don’t rule out the fight [Fury vs. Joshua] for the future. All those conversations were between George Warren and myself, and later on particularly George Warren and Frank Smith.

“There’s an open line of communication. I think it’s really positive for the future for fights to get made. So in that respect, great. Obviously, we didn’t get the big one over the line, but certainly, it opens the door for better communication lines.

“The reality is, Tyson doesn’t like to get quizzed, really,” said Hearn about Fury blowing up during his interview on the ‘True Geordie’ podcast on Youtube. “I do 30 of these during fight week every day.

“After a while, you do lose your rag a little bit, and he’s a fighter. So I’m a promoter. It’s my job. It is his job in some ways, but he’s also a fighter, and sooner or later, and maybe, he was having a bad day.

“He also doesn’t like to be quizzed on things, and he showed a little bit of weakness there, but he also showed he’s a human. Some people just get pissed off.

“It wasn’t a good look, but at the same time, it was a good promotion as well. There were times when I thought cheeky, but I would never say it on camera, but also, it’s my job. I have to do these interviews.

“He does because he’s contractually it’s part of his job, but that’s not what he does for a living. That’s what I do for a living. He fights. So sometimes you stoke the fire, and you’re going to get a reaction.

“But it was weird. It wasn’t like he was abusing him or bringing anything controversial up. He was just giving the opinion of the fight fans,” said Hearn. 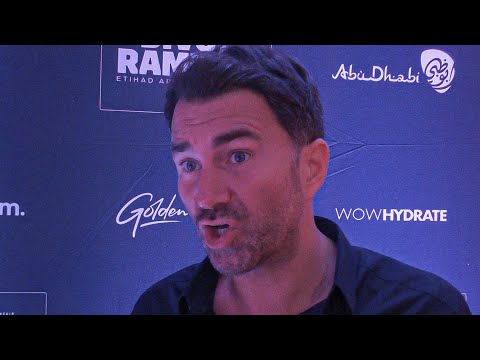