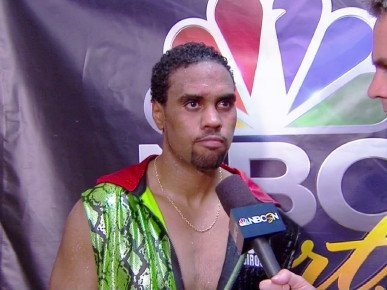 Having been told a while ago that Eddie Chambers was thinking of joining Team Fury, I thought “Astute of him. Where has he been?”. Here was a Heavyweight fighter with a record of W36 L4 who had been beaten last year in his only fight of 2013, after a bad decision to move down to Cruiserweight. Were the gears grinding down on “Fast Eddie’s” career? At 31, and seemingly losing love for the sport, Eddie was squandering the talent he had been given.

I had had a conversation with Peter Fury a few months ago after Chambers had been part of the Fury training camp for the, ultimately, disastrous Haye debacle. He was very impressed with Eddie’s skills and attitude. But you don’t need Peter to tell you Eddie can box/fight/win. Even a layman can see that Eddie Chambers has been in with the very best the sport has had to offer over the past 6 years: Wladimir Klitschko, Alexander Dimitrenko, Alexander Povetkin, Tomasz Adamek, Samuel Peter. Only Wladimir has narrowly managed to knock Chambers out, and then with just five seconds left of the entire fight. However you look at it, Eddie Chambers has got skills. Now it’s been announced officially that he is firmly a member of Team Fury; he’s back on the track.

I asked Eddie yesterday what had prompted him to sign up with Team Fury and, more specifically, put his career in trust to Peter Fury. “Well for one, upon meeting Peter in person, right away you can feel through just one conversation that this is a stand-up guy, a real class act, and that’s half the battle in this business; finding a trustworthy individual that you can have an honest business and personal relationship with. Now that’s the reason behind the obvious; what’s easy to see with him is his knowledge of Boxing both inside and outside of the ring, and the opportunities that Peter and Team Fury can provide for me.”

I wondered if we’d seen the best of Eddie Chambers already, if the ship had sailed with the narrow loss to Adamek? Was there any more to give, another level in the tank? “There’s no doubt in my mind that no-one, including myself, has seen the best version of me inside the ring. There is always room for improvement and I think with the help of Peter and Team Fury I will finally get the opportunity to show that version of me.”

It’s always easy to dismiss positive talk of a fighters future, especially as mentally, every fighter has to be optimistic and filled with self belief, or they wouldn’t even climb through the ropes. In Eddie’s case it’s not that he was a raw talent which needed nurturing, he just needed the right mechanic to fix whatever problems simply being a boxer brought up. Fix the training camps, the day to day of being a fighter, get the tactics right, and you go into the ring a different man. Get the “mojo” back. This is as positive and upbeat as I’ve ever seen Eddie Chambers.

Signing with Team Fury now means Eddie’s “comeback” (Which, really, it is) is going to be televised straight onto our screen courtesy of the new deal with Frank Warren and BoxNation. It also means, for the first time, Eddie will be fighting in the UK. I asked him what he thought about fighting in front of an audience that will be looking for a good performance, rather than slavering with teary-eyed jingoism ringside. Did he think they’d take to him? “I demand a lot from myself as a Fighter and as a person. With that being said, I’m going to give the best account of myself to the UK Fans. And with their passion and knowledge of the sport, I think they will take to me pretty well.”

Obviously there will be one, or maybe two, warm up fights for Chambers before he looks to up his game; potentially, on the Tyson Fury vs Dereck Chisora “Super Fight” card, which is being penciled in some time this summer in the UK. But don’t take that as Fast Eddie just being a side-show on the Fury Roller Coaster, he isn’t. Peter Fury is aiming high with Chambers and has publicly said he believes him to be a boxer who is more than capable of being right at the very top of the division. Eddie shares that aim, “In Boxing, one day you can be scraping the bottom of the barrel, and the next be on top of the World. With the help of Team Fury, I think this gives me a great chance of getting to the top, and that’s where I wanna be!”

In a time of giants in the Heavyweight division, 6’1″ Eddie Chambers isn’t finished yet with seeing the mighty fallen. This could well be a resurrection of a fighter the sport needs, at a time where the division is starting to kick into life. Fast Eddie rides again; this time with purpose.