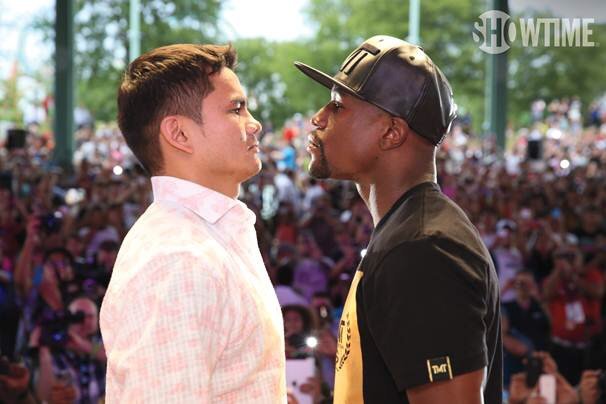 In a move designed to enhance the viewing experience, SHOWTIME Sports®, Mayweather Promotions and Golden Boy Promotions have scheduled the “MAYHEM: Mayweather vs. Maidana 2” pay-per-view event, headlined by the rematch between Floyd Mayweather and Marcos Maidana, to start at 8 p.m. ET/5 p.m. PT instead of the traditional 9 p.m. ET/6 p.m. PT. The earlier start time is another innovative step SHOWTIME Sports is taking to improve the television viewer’s experience for live boxing events. Viewers in the Eastern and Central time zones, which make up nearly 80 percent of the U.S. population, won’t have to stay up as late as usual in order to witness the conclusion of the event.

“Pay-per-view boxing events have changed, and we think it’s time the scheduling changed too,” said Stephen Espinoza, Executive Vice President and General Manager, SHOWTIME Sports. “Along with our partners at Mayweather Promotions and Golden Boy Promotions, we have been presenting compelling four-fight cards with multiple 12-round world championship bouts. As a result, we’ve seen the start of the main event coming later and later into the night which is not an ideal viewing experience for viewers in the Eastern and Central time zones. No other major sport makes a significant portion of their audiences wait until well past midnight for the peak of the event. SHOWTIME PPV will no longer be one of the exceptions.”

“Mayweather Promotions is excited to be part of this initiative to start the pay-per-view show at 8p.m. ET,” said Leonard Ellerbe, CEO of Mayweather Promotions. “In years past the main event did start earlier and I believe this change is a convenience and great advantage for the paying customer. With Floyd’s fight starting earlier, all of his fans watching will be able to enjoy the event. It works well for both coasts and we very much welcome it.”

The earlier pay-per-view start time is only one of the changes SHOWTIME Sports has made in recent years to improve its live event coverage of boxing.

SHOWTIME has recently added “COUNTDOWN LIVE” to accompany blockbuster PPV boxing events. The preview show, which airs live on SHOWTIME immediately prior to the start of the PPV, offers a live bout along with live interviews, special features and analysis. On Sept. 13, “Mayweather vs. Maidana 2: COUNTDOWN LIVE” (7 p.m. ET/4 p.m. PT on SHOWTIME) will feature a 10-round junior welterweight matchup between John Molina (27-4, 22 KOs) and Humberto Soto (64-8-2, 35 KOs).

In another move to enhance value for subscribers, SHOWTIME CHAMPIONSHIP BOXING, the flagship boxing series on SHOWTIME, has increased the number of fights on each card from the industry-standard two fights to three-fight telecasts on a regular basis. Additionally, SHOWTIME Sports has also given fans the opportunity to experience even more live action with the airing of previously non-televised undercard bouts on SHOWTIME EXTREME®.