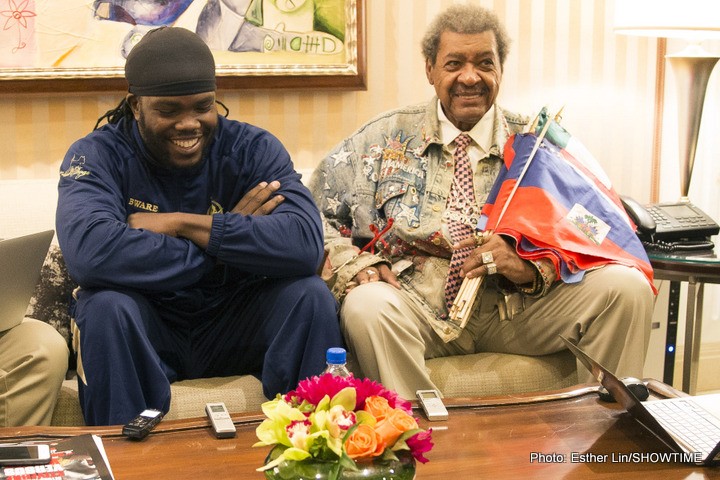 The top two ranked heavyweights by the World Boxing Council (WBC), No. 1 Alexander Povetkin and No. 2 Bermane Stiverne, have recently been ordered to fight for the interim WBC heavyweight title. The winner will become the interim champion and will defend the title until champion Deontay Wilder, is ready to come back from the injuries sustained in July.

“I would like to thank Don King and the honorable Mauricio Sulaiman of the WBC for giving me this opportunity to fight for the heavyweight title once again,” said Stiverne. “For the betterment of boxing in general, and the heavyweight division in particular, I plan to knock Povetkin out and bring this title to America. Then I will get my revenge against Wilder, when he is ready.”

Promoter Don King has been fielding calls from interested parties from all over the world that want to host this World Heavyweight Championship fight that will take place by the end of 2016.

Don King lists the Democratic Republic of Congo and the Philippines, the two locations of the most famous Muhammad Ali fights, at the top of the list of possible sites. Kuala Lumpur is also among international possibilities and of course United States boing hotbeds New York and Las Vegas are sure to be in the mix as well.

“This sparked the idea to do something fantastic by memorializing ‘The Greatest of All Time’ Muhammad Ali, to the benefit of the people.,” said King “So, reflecting on my memories and my historical association with The Greatest…Ali, we, his spirit and I, seized upon the idea to create A Salute to Greatness Championship Series by celebrating and paying homage to great boxing champions of the world and paying tribute to great champions of humanity and peace for the world in the spirit of Muhammad Ali, Nelson Mandela, George W. Bush, Shimon Perez, Uri Savir, John F. Kennedy, Martin Luther King, Jr., Larry Holmes, Mike Tyson, Anwar Sadat, Jimmy Carter, Jose Sulaiman (WBC) and Hugo Chavez. We will spotlight countries that four decades ago held the most memorable heavyweight fights in history. We will visit new countries that maybe able to have that same impact on, to gain international fame and acclaim, catapulting the name of their country to the forefront of world recognition.”

“We want to bring the world together,” King concluded. “I have been taking calls, for weeks, from interested parties and we will consider all options. We want to reverse the affects that war, hatred, bombs and bullets have had …and with love, respect, harmony and togetherness we can make a better world.”

“I want to thank the WBC and its President Mauricio Sulaiman for this.” said King.

Bermane Stiverne (25-2-1, 21 KOs), born in Haiti now residing in Las Vegas, won the WBC heavyweight title on May 10, 2014 by 6th round TKO against Chris Arreola. Stiverne knocked Arreola to the canvas twice in that round when referee Jack Reiss waved the count to end the fight. Stiverne lost the title via unanimous decision to Deontay Wilder on January 17, 2015. Stiverne followed that disappointing loss with a win against Derric Rossy on November 4, 2015 to vault him back to top contender and in position for the title.

Alexander Povetkin (30-1, 22 KOs) from Chekhov Russia is the current WBC Silver Heavyweight Champion and former WBA Heavyweight Champion. Povetkin won the WBA title via unanimous decision win against Ruslan Chagaev on August 27, 2011. Povetkin had four successful defenses over a two-plus-year reign prior to a losing the belt against Vladimir Klitschko on October 5th 2013. Povetkin responded to that unanimous decision loss by stringing together four consecutive wins including winning the WBC Silver belt, which represents the No. 1 ranking.

First Fight Could Be Povetkin-Stiverne (With Putin and Trump at Ringside?)

The architect and impresario behind the legendary The Rumble In the Jungle and Thrilla in Manila and countless other historic classic boxing events, Hall of Fame promoter, Don King, has plenty of fight left in him.

King, still going strong at 85, is planning an upcoming “Salute To Greatness” worldwide boxing series in memory of Muhammad Ali. The idea, says King, “is to do a global salute to the memory of the greatest, Muhammed Ali’’ by revisiting some of the cities and countries King helped make famous and to promote major championship events, every few months, in new locations around the world, for Ali and the people’s champions for peace globally.

“I brought international fame and acclaim to cities and countries, brought them worldwide recognition, put them on map,’’ King said. “We put Manila on the map, same with Zaire and many other places. With this series, we’re open to do things that have never happened before.

“We could go anywhere and everywhere, we’re gonna conquer the world. They’re calling me, Africa is calling me. I don’t even have to call them.

“It’s the 41st anniversary of The Thrilla in Manila, the 42nd anniversary of The Rumble In The Jungle. We could take George Foreman, Larry Holmes, go to Mexico for Julio Cesar Chavez, Panama for Roberto Duran, Puerto Rico for Felix “Tito” Trinidad, and just go around. The possibilities are endless.’’

The Stiverne-Povetkin winner would face the unbeaten American, WBC heavyweight champion Deontay Wilder, once he’s fully recuperated from a broken hand and torn biceps suffered in his last defense against Chris Arreola. Wilder hopes to return to the ring by mid-January.

“The (Stiverne-Povetkin) fight would mark the first in a long journey. If Bermane wins, we take him around the world. Bermane has a lot to prove. He’s the only fighter to go the distance with Wilder, but he gave that fight away. This is his chance for redemption; the tour will go on with or without him. We shall overcome!

“This is the Love & Peace Roundup for me. I’m back in the saddle. There’s no stopping this series. It’s a ‘Salute to Greatness’ in the memory of Ali and for all the great fighters all over the world.’’