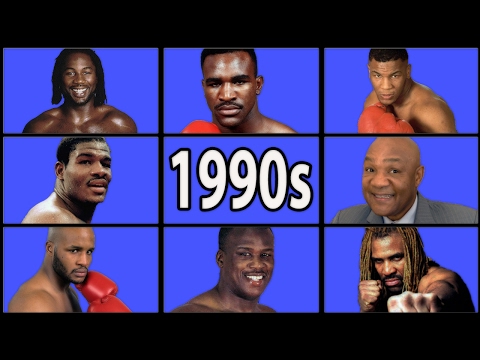 The 1990s saw 5 different undisputed champions. Mike Tyson, Buster Douglas, Evander Holyfield, Riddick Bowe, and Lennox Lewis all held that distinction at one time or another during this period. In addition to those 5, George Foreman, Michael Moorer, and Shannon Briggs had all been recognized with the lineal claim. And beyond them, other title holders during this time included Bruce Seldon, Oliver McCall, and Frank Bruno.

Future champions Oleg Maskaev, Hasim Rahman, John Ruiz, Chris Byrd, and brothers Vitali and Wladimir Klitschko also competed in this era, as did former champions like Tim Witherspoon, Tony Tucker, Michael Dokes, and the great Larry Holmes. And then of course there were some other excellent contenders who never won titles such as Andrew Golota, David Tua, Ike Ibeabuchi, Tommy Morrison, and Razor Ruddock.

This edition of Rummy’s Corner attempts to provide fans with a chronological recap of all the key moments that unfolded in the heavyweight division between January 1, 1990 and December 31, 1999. It follows the path of all the major world titles from the time – the WBA, WBC, and IBF, as well as the lineal “title” – from the start of 1990 when Tyson held all of the titles, throughout the mid-90s when the titles became splintered, and ending with the conclusion of 1999 when Lennox Lewis had successfully reunified all of the major world titles.

It is my sincere hope that boxing fans, especially fans of the 90s heavyweight landscape, will be provided with a pleasant stroll down memory lane. Please watch and enjoy the video!