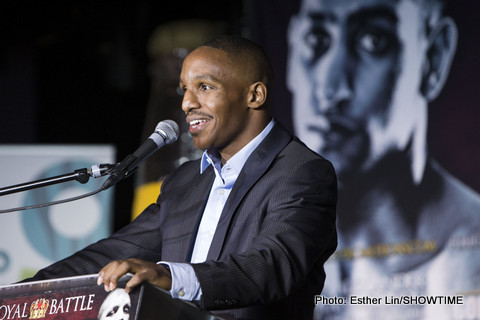 The 10-round bout will headline a show promoted by Warriors Boxing and Fire Fist Boxing Promotions and features a 10-round co-main event between unbeaten welterweight prospect Miguel Cruz against once-beaten David Grayton. Two of the fighting Russell brothers, Antonio and Antuanne, brothers of featherweight champion Gary Russell Jr., will enter the ring in separate six-round matches.

Tickets for the live event begin at $35 and are on sale now. To purchase tickets visit www.ticketmaster.com.

“This show is packed with talent and should deliver a great night of boxing for fans in Florida and watching on FS1 and FOX Deportes,” said Leon Margules, President of Warriors Boxing. “Devon Alexander is a former two-division champion on the comeback trail and he’ll be tested by Walter Castillo, who is always in exciting fights. Miguel Cruz and David Grayton are both hungry prospects looking to raise their status and Antuanne and Antonio Russell are hoping to follow their brother Gary on the path to a world title. I want to thank my partner Fire Fist Boxing Promotions, for their hard work to make this event happen in Florida.”

The 30-year-old Alexander (26-4, 14 KOs) will end a two-year layoff due to health issues when he steps in against Castillo. Alexander, of St. Louis, Missouri, won the 147-pound world championship with a unanimous decision victory over Randall Bailey in 2012. He lost the title via unanimous decision against Shawn Porter the next year. Alexander, a southpaw, was a unified champion at 140-pounds and owns victories over Marcos Maidana, Lucas Matthysse and Jesus Soto Karass.

“Two years is a long time to be away from something you love but I wanted to make sure when I come back that I would be 100 percent my old self,” Alexander said. “My last outings were not me, and a lot of my fans and people that know me are aware of that. I’ve been in constant training since then while getting my personal situation in order. Castillo is a good solid fight that is going to bring the best skills out of me. He’s not a slouch and he’s coming to fight. But it’s not about what Castillo coming to do. It’s about me making a statement to show people that I am still up there with the elite fighters, and I know that when I’m right, nobody can beat me.”

After campaigning the last few years at 140 pounds, Castillo (26-4-1, 19 KOs) is stepping up to 147 pounds to take on the former champion Alexander. The 29-year-old Castillo, of Managua, Nicaragua, will be ending a 16-month layoff on November 21. Castillo lost by TKO to Sergey Lipinets in a 140-pound clash his last time out after previously fighting to a draw against Keita Obara in a title eliminator.

“I think this could be one of my last great opportunities and I’m very excited for it,” said Castillo. “Devon Alexander is a great boxer and I will have to be at my very best. Even though I’ve been out of the ring, my condition will not be a problem. I am 100 percent ready to give Alexander trouble. I am working very hard on a game plan to stop Alexander shock everyone.”

The unbeaten Cruz (16-0, 11 KOs) has been very busy in 2017 as he steps into the ring for his fourth fight this year. The 27-year-old welterweight from St. Mary, Florida scored a unanimous decision victory over Alex Martin in a rematch in his last fight on June 27 after earning a split-decision in their first fight and beating Ali Mammadov in between.

The 30-year-old Grayton (15-1-1, 11 KOs) is coming off a technical draw against former champion Kermit Cintron in his last fight on March 17. Grayton, of Washington D.C., suffered the only loss of his career when he was stopped by technical knockout by Bryant Perrella on June 4, 2016 before returning to defeat Kareem Martin in August last year leading up to the Cintron fight.