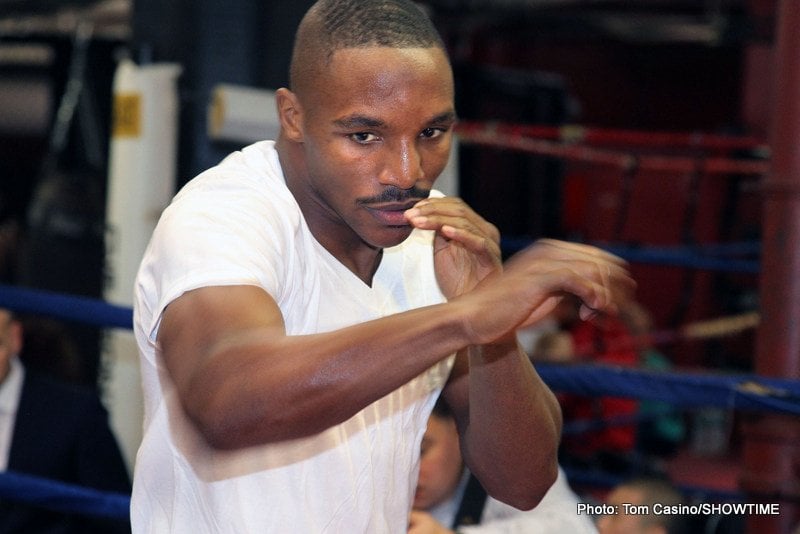 Alexander will be returning for what is ostensibly a confidence builder, which follows his shutout points loss to Britain’s Amir Khan last December, a fight that was the culmination of a dip in form that started when he was lost his IBF title to pre-fight underdog Shawn Porter almost two years ago.

Martinez, a Mexican who has been beaten every time he stepped up in competition, against the likes of Jessie Vargas, Josesito Lopez and Robert Guerrero (which was his last fight), has at least got the goods to make it competitive if Alexander isn’t on form, having run a fading “Ghost” close back in June, after dropping him earlier in the bout.

Alexander knows that he badly needs a win however, and should easily be a level above a guy like Martinez. If he WAS to fail in this endeavour – which will take place on a Wednesday due to US college football scheduling – you would have to wonder how long Devon can stay around at a meaningful level.

As for Selby, the new Al Haymon signing is already out in the US with his team, including manager Chris Sanigar, and will be looking for a statement showing in his first fight under the PBC umbrella against the dangerous, although now arguably faded, 36 year old Montiel.

Selby won the title in May, outclassing IBF fighter of the year Evgeny Gradovich, en route to an 8 round TD (cut), and will be looking to avoid some of the pitfalls that befell Northern Irish super bantamweight Carl Frampton, who had a less than auspicious start to his PBC career in the US against Alejandro Gonzalez Jr in July.

The Welshman should have far too much for the smaller former 3 division titlist, who began his championship reign back down at flyweight, although as per Frampton, Selby would be foolish to overlook the veteran, who is currently on an 8 fight win streak, as doing so would put paid to a sought after unification with new WBA 126 lb belt holder Leo Santa Cruz.

Selby was ringside for last weekend’s Santa Cruz/Mares clash, and has one eye on a future fight with the new “King of LA.”