Undisputed lightweight champion Haney (28-0, 15 KOs) wound up going back and forth with Espinoza over what was originally a trash-talking session with WBA secondary 135-lb champion Gervonta, who he views as an underachiever.

Devin states that he tried to reach out to Espinoza in the past for fights, but nothing came of it. Espinoza told Haney to have his promoters call him, which still doesn’t mean that we’ll see a fight between Devin and Gervonta.

Presumably, Mayweather Promotions would make the decision whether to let Tank fight Haney and doesn’t seem realistic. There’s too much uncertainty in that fight, and Tank usually fights guys in which the outcome is obvious.

Haney says he wants to fight Tank, but it doesn’t appear that the feelings are mutual. Tank’s fights are picked out for him by his management, and it doesn’t seem realistic that he’ll be facing Haney anytime soon, if ever.

Haney, 23, is currently promoted by Top Rank, which pretty much rules out a fight between him and the 27-year-old Gervonta fighting. But even when Haney’s contract with Top Rank expires, it’s doubtful that Tank will fight him unless he signs with PBC. Those are the guys that Tank fights.

Stop being lame Stephen… i just said my dad has reached out to you numerous times and you know it’s the truth! Clout?? GTFOH! It sound like you want the clout being a network executive getting in fighter vs fighter business…. https://t.co/ZOu3pjL86k

We both know that I have a co-promotional deal… my father has reached out to you numerous times with no response back… knock it off Stephen…. https://t.co/iij1dnEvuM

Stephen I have no problem taking Tanks Mickey Mouse belt in December… https://t.co/dr5BQToyoS

Tank Davis took a shot at Haney, saying that he makes 5x as much money for his fights. It was a weak remark by Gervonta, as it was money-focused instead of concentrating on Haney’s invitation for a fight.

If anything, it seemed like Tank was trying to change the narrative by devaluing Haney so that he would have an excuse for not fighting him.

It’s going to look bad on Tank’s part if he gives Isaac ‘Pitbull’ Cruz a needless rematch instead of fighting Haney or Vasyl Lomachenko. Even fighting Ryan Garcia will make Tank look bad because he’s viewed as a hybrid social media/boxer by a lot of boxing fans.

The fights that fans want to see from Tank Davis are against Haney and Lomachenko. The casual boxing fans are excited at the thought of Tank fighting Ryan Garcia, but that’s going to be a horrible mismatch. 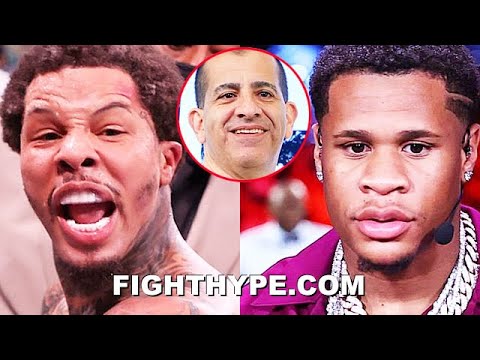