WBC lightweight champion Devin Haney (28-0, 15 KOs) fought superbly in schooling an overmatched unified lightweight champion George ‘Ferocious’ Kambosos Jr. (20-1, 10 KOs) by a 12 round unanimous decision for the undisputed championship in front of a large crowd at the Marvel Stadium in Melbourne, Australia.

Neither fighter was ever hurt in the contest, and it was more of clinical performance by the 23-year-old Haney. This is how he always fights, though, as he’s not a knockout guy, and if you lack power, as was the case with Kambosos, you have virtually no chance of winning.

Whatever chance Kambosos had of winning, he threw it out the window by not going all out to get in punching range. With his short arms, he needed to attack relentlessly like an old school fighter, risking everything.

Unfortunately, Kambosos lacked the willingness to risk all, not attacking aggressively in the way he desperately needed for him to have a shot at winning.

The judge’s scores: were 116-112, 116-112, and 118-110. Kambosos fought well enough to win two, possibly three rounds if you were being generous to him. He was throwing too many single shots, and he needed to throw combinations to have a chance of winning.

Thanks to Kambosos, the fight failed to live up to the high expectations, given his lack of ideas in how to get past the 23-year-old Haney’s powerful jabs.

Kambosos made himself an easy target for Haney’s jabs by holding his left after down by his sides. 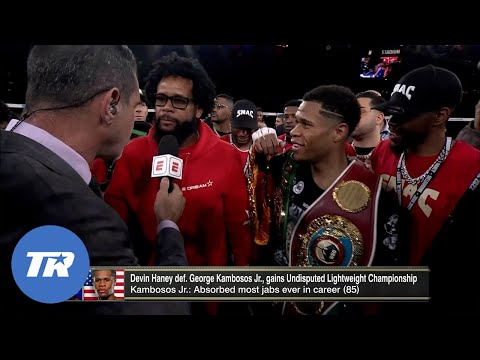 This is something that Kambosos’ trainer should have fixed in camp because he was getting hit all night long by Haney’s jabs, and unable to block them due to his left down by his waist.

Haney was jabs, combinations, and clinching Kambosos when he would get in punching range.

It wasn’t exciting to watch compared to some of the undercard fights, and the crowd was clearly disappointed at not only seeing Kambosos lose but also because of the lack of action and drama.

After all the trash-talking that Kambosos had done in the build-up to the fight, he looked like the same B-level fighter that had struggled to defeat the faded Lee Selby and Mickey Bey in the past.

In watching how inept Kambosos was tonight, this confirms that Teofimo Lopez was injured & ill last November when he lost to him because he would have never been beaten by this guy if he were 100%.

It’s up to Kambosos to decide whether to execute the rematch clause in the contract to force Haney to rematch him in Australia.

If Kambosos does fight Haney again, he’ll lose unless he makes dramatic changes to his game. More importantly, Kambosos needs to develop some power because he doesn’t hit hard enough for him to have a shot at knocking Haney out. 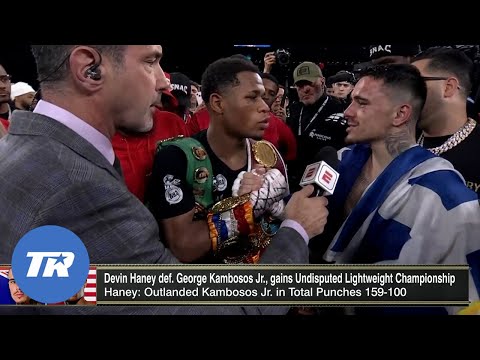