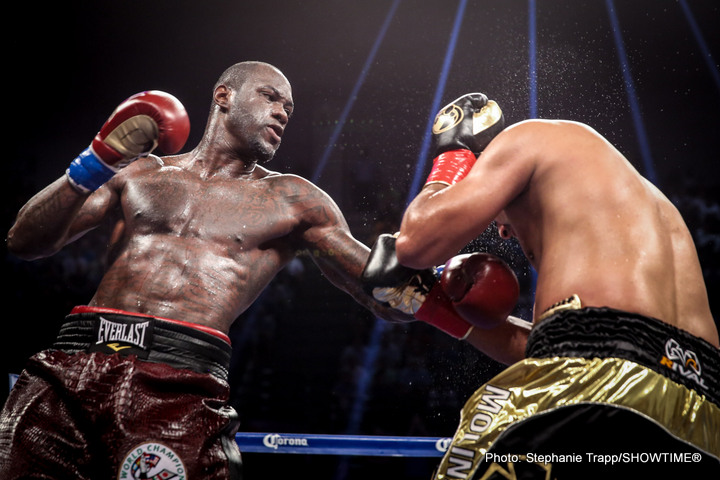 Right now there are a lot of boxing fans and members of the media who have serious doubts about WBC heavyweight champion Deontay Wilder (34-0, 33 KOs) being able to hold onto his WBC heavyweight title for very much longer. Wilder’s performance last night against Eric Molina (23-3, 17 KOs) was arguably one of the worst performances by a heavyweight world champion in many years.

Wilder looked like an amateur and not a very good one in beating the 33-year-old Molina by a 9th round knockout in front of a crowd of 9,347 fans at the Bartow Arena, in Birmingham, Alabama, USA. After getting hurt on at least two occasions by the 6’4” Molina, Wilder’s right hand power came through for him in dropping Molina to the canvas in the 9th after hitting him to the side of the head with a bone-crunching shot.

There was no getting up from that shot. Referee Jack Reiss did the only thing he could do in stopping the fight at 1:03 of the round rather than waiting around to see if Molina would get back to his feet. This was the 4th knockdown in the fight, and Molina would have had no chance to win even if he’d gotten back up.

The fight was supposed to be a non-competitive affair with Wilder expected to destroy Molina straightaway. But what we saw instead was an uncoordinated-looking and a much timed looking Wilder struggling to get his shots off. To be sure, the openings were there for Wilder to land his shots if he had the confidence and the courage to throw his punches, but he just wouldn’t do it.

Wilder was seemingly second-guessing himself whether to let his hands go or not, and waiting constantly for the right moment to throw his right. Instead of reacting on instinct to throw his right hand, Wilder was waiting too long and treating the fight like a chess match.

This was just a simple title defense for Wilder against a fringe contender who had been previously knocked out in the 1st round by Chris Arreola. This should have been easy victory for Wilder if he’d let his hands go, but instead it turned out to be a difficult bout for him.

Molina staggered Wilder in the 3rd and 8th rounds with big shots. Wilder did a good job of avoiding Molina’s follow up shots, but he shouldn’t have been hurt in the first place by Molina. If Wilder had just come out fast and bombed Molina out of there in the 1st round like he was capable of doing, it would have been an easy fight. But the fight showed that Wilder’s mind in his worst enemy because he failed to use his weapons to destroy a guy that would have caved in immediately if he’d simply gone all out in the 1st round.