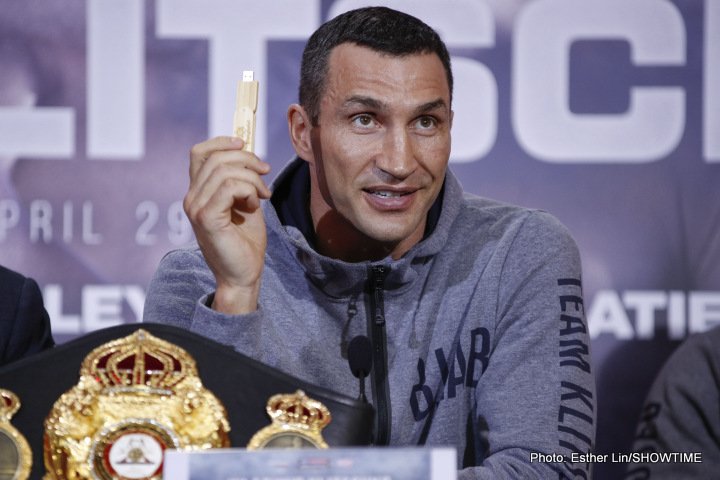 Ever since Tom Loeffler spoke as a guest on Gerry Cooney and Randy Gordon’s radio show speaking about how he, and he alone – not necessarily Wladimir Klitschko himself – was interested in seeing a Wladimir-Deontay Wilder match-up take place ‘IF’ Wlad did decide to come back (and “Dr. Steel Hammer” has reportedly been offered a ton of cash from the folks at DAZN), websites galore have ran with the story.

Despite the fact that Wladimir himself has not uttered a single word about this “possible” fight, some of these written articles have told us that the fight is indeed a realistic one; one we should brace for over the coming months. But Wladimir, a smart guy, will surely not come back for such a risky fight. Do we even want him to do so? As unlikely as this fight is, it’s also an unwelcome fight – for those people who care about the well being and health of Klitschko, anyway.

At age 33, and coming off that thriller with Tyson Fury, during which he managed to violently slam Fury to the canvas twice (Klitschko by comparison, was scarcely able to land a glove on “The Gypsy King” in that dreadful 2015 bout), Wilder is bristling with rage ahead of his May fight with Dominic Breazeale. Wilder is a man, we must never forget, who quite recently said he would “like to have a body” on his record. Just last week, the WBC heavyweight champ said aloud how his next foe should “be making some funeral arrangements.” The gentlemanly Klitschko, by comparison, is content in retirement (most probably) and he has been inactive for almost two years. And oh yeah, he is 43 years of age.

Klitschko was a shrewd defensive operator during his long run of title retention’s, never allowing his rival to get home with more than one punch at a time, or not even that ideally. But in the Anthony Joshua fight of April 2017, Klitschko’s fortress of a defence was penetrated, again and again. Now, even older and slower, the last thing Klitschko should be doing is swapping punches with, or taking punches from, the single most lethal heavyweight on the planet.

Around three or four years ago, a Klitschko-Wilder fight would have been hugely interesting, maybe even a mega-fight. But not now. Klitschko has no need to return to fight anyone, least of all Wilder. It would be nasty if this fight happened. Very nasty. Wilder knows no other way and there would be no Larry Holmes Vs. Muhammad Ali-like sympathy from the champ during what would be another one-sided fight we should not be forced to witness.