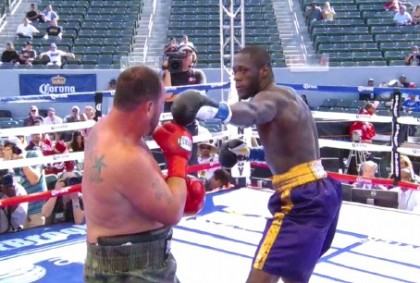 #1 WBC unbeaten heavyweight Deontay Wilder (32-0, 32 KOs) feels certain that he’ll be getting a title shot against WBC heavyweight champ Bermane Stiverne (24-1-1, 21 KOs) in the next three months in November. Deontay says that the letters have already been sent out for the fight and that the negotiations are about to start.

Deontay will need to raise his game considerably to where we saw him fight last Saturday night when he defeated an out of shape journeyman Jason Gavern by a 4th round TKO defeat. Deontay fought like he was going half speed in the fight, and he didn’t look particularly skilled.

Brian Kenny of Showtime was disappointed with Deontay’s performance in the Gavern fight. Kenny said “Deontay couldn’t get him out, at least easy. What was surprising is he couldn’t even snap a good jab off his head. I’d have to say I’m less than thrilled with this performance. I’m all for bringing a guy along slowly until he’s ready. Is it so crazy to think he could challenge Wladimir Klitschko and be the best in the division? I really have misgivings.”

Deontay admitted that he fight fought Gavern at a slower pace because he wanted the fight to last longer so that he could get some rounds in for training purposes. However, Kenny is correct about Deontay not having a good jab. For some reason, Deontay has never learned how to throw a good jab despite having good trainers.

It’s unclear whether it’s a physical thing with him or perhaps a lack of drilling. If Deontay had a jab as good as Wladimir Klitschko, he would dominate many of his opponents on size alone, but that’s not the case. Deontay paws with his jab and he mainly uses it as a range finder to measure his opponents for his right hand shots.

Deontay doesn’t tie up his opponents when they get in close, and that’s something he should have been taught a long time ago. Deontay would be so much better know if he had someone like Emanuel Steward to guide his career. You would have to think that Steward would have developed Deontay’s jab, left hook and uppercut by now. None of those punches are effective tools for Deontay. He’s still totally reliant on his right hand.