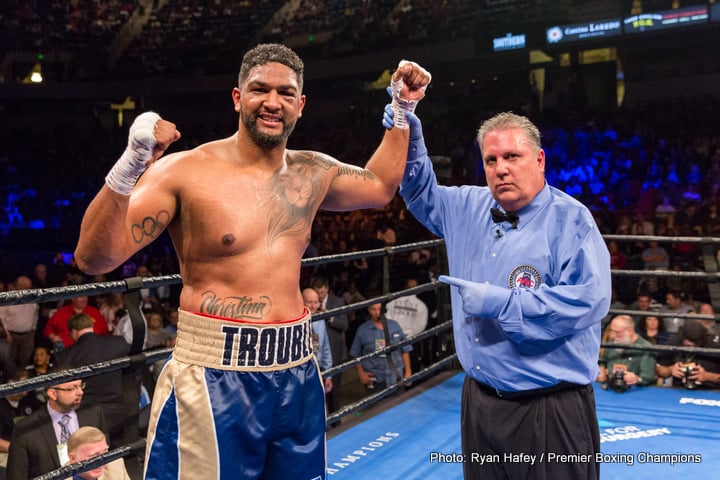 Breazeale says he was “blindsided by sucker punches”

It seems heavyweights Deontay Wilder and Dominic Breazeale did not fight once each on Saturday night in Alabama, but twice – their second fight, or brawl, being between each other. Wilder, who retained his WBC crown with a come-from-behind stoppage win over a game Gerald Washington, later got into it with Breazeale, who won an exciting fight with the unbeaten Izuagbe Ugonoh – so claims Breazeale.

Breazeale says Wilder and “a mob of about twenty people, unprovoked, attacked my team and my family in the lobby” on Saturday night. Breazeale adds how “my coach and I were blindsided by sucker punches and my team was assaulted in front of my wife and kids.”

READ:  If Manny Pacquiao And Juan Manuel Marquez Had Fought A Fifth Fight, Who Would Have Won?
https://www.youtube.com/watch?v=qJsdLk_crV4

TMZ Sports have a grainy, hard-to-see video of the incident up now on YouTube, and it’s clear there was some kind of nasty altercation. Wilder can be seen in the video and though he is clearly angry, it’s difficult to see if he actually did anything untoward during the incident. Still, it’s more bad press for the sport and its image. Breazeale, who is absolutely furious, may well attempt to take legal action.

“This cowardly act has no place in boxing and believe me [it] will not go unpunished,” Breazeale wrote in closing his official statement.

It’s a shame an otherwise good and enjoyable night of boxing – with legends Larry Holmes, Evander Holyfield and Earnie Shavers in attendance – had to be spoiled by such a crazy incident. It’s not clear who started the brawl or who if anyone threw landing punches, but Breazeale is sure of one thing: he was not to blame. The contender who came back well from his stoppage loss to IBF heavyweight champ Anthony Joshua may now want a shot at Wilder’s WBC belt.

For whatever reason or reasons, these two have some serious bad blood between them. Wilder commented on Instagram earlier today on what exactly happened in the hotel lobby minutes after his win over Washington.

“First and foremost, it is my honor to be the WBC heavyweight champion of the world and it was a wonderful experience defending my title in my home state of Alabama last night. Holding this title is a privilege and one that I cherish. I know that this privilege comes with a great responsibility, not just inside the ring but also how I conduct myself outside the ring. I am disappointed that attention has been diverted away from my title defense and my conduct has come into question, it is important that I set the record straight with regards to the incident that took place in the hotel last night with Breazeale.

We all know there are two sides to every story and the story the world has been told thus far is wrong. Breazeale confronted my brother in the arena and told him he would kill my entire family. There were many witnesses to this. My brother was the one provoked. I was very upset when I heard about that incident. THIS IS MY ONLY BROTHER AND I AM HIS KEEPER.

I did want to confront Breazeale, man to man and face to face, but just because we are fighters doesn’t mean we always have to act with violence and my only intention was to speak with him. I’m sure many of you have seen me on many occasions and those that know me knows I don’t travel with a Big Entourage In Fact, I don’t believe in it.

I was accused of having a MOP OF 20 People and that’s just ridiculous. I approached Breazeale in the lobby Alone as my Team stood back and immediately a member of his team grabbed me. My brother was punched, people close to Breazeale yelled cuss words at me, and I lost my cool. My only concern was the safety of my family and my only brother.

First, I did NOT throw a punch. Second, I did NOT make a comment about Breazeale’s children. Anything else you have heard is a lie because no matter how heated or protective I may be, I’m not the kind of man to go after someone’s kids. I understand how this incident looks given that I am heavyweight champion, but I want to ensure people I did not act in the manner Breazeale has claimed and the videos are clear about that.

The statements from his team were untrue and a defamation of my character. I will go to great lengths to prove that.” 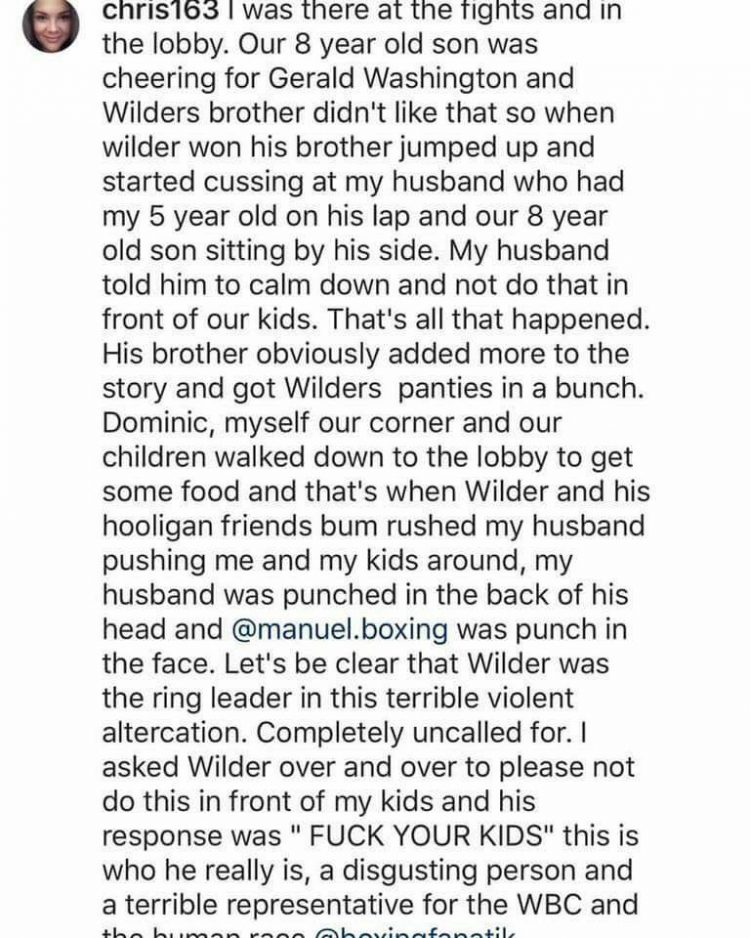