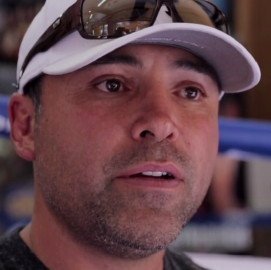 Depending on which way you look at it, Golden Boy CEO and former 6 division titlist, Oscar De La Hoya has played what can be seen as a pair of publicity masterstrokes of late – firstly with his controversial inclusion of female MMA fighter, Ronda Rousey appearing on the [GB owned] Ring magazine cover, and now, with an ‘open letter’ to Floyd Mayweather that has created a similar storm and diverted ‘attention’ back to boxing.

Whether that attention has been for the good of the sport, or to the detriment of it, is for the individual to decide, yet in his 1148-word-long written diatribe at Mayweather – which is published in Playboy magazine – there is no doubting De La Hoya asserts some cold, hard facts laced with a caustic wit that, assuming Mayweather has had someone read it to him [sorry, couldn’t resist] can’t not have bruised the inflated ego of the self professed ‘TBE’ – even just a little bit.

“You did it. You made it to the 49-0 mark, a milestone that you like to say only the great Rocky Marciano reached but that was actually achieved by others, including my idol Julio Cesar Chavez — but who’s counting,” De La Hoya wrote.

“And now you’re retiring. Again. (The first time was after our fight in 2007.) This time you say it’s for real. You’re serious about hanging up the gloves. On to bigger and better things. So I’m writing to you today to wish you a fond farewell. Truth be told, I’m not unhappy to see you retire. Neither are a lot of boxing fans. Scratch that. MOST boxing fans. Why? Because the fight game will be a better one without you in it.”

It didn’t end there of course, with De La Hoya going on to poke fun at Mayweather’s ‘final’ hurrah against Andre Berto in September, claiming the fight is the perfect sleeping aid for his children.

“Just take a look at your most recent performance, your last hurrah in the ring, a 12-round decision against Andre Berto. How to describe it? A bust? A disaster? A snooze fest? An affair so one-sided that on one judge’s card Berto didn’t win a single round?
“Everyone in boxing knew Berto didn’t have a chance. I think more people watched ‘Family Guy’ reruns that night than tuned in to that pay-per-view bout. But I didn’t mind shelling out $75 for the HD broadcast. In fact it’s been a great investment. When my kids have trouble falling asleep, I don’t have to read to them anymore. I just play them your Berto fight. They don’t make it past round three.”

Yet it’s his assertions that Mayweather cherry-picked many of his best wins in the sense they came when the opposition was way past prime – including Oscar himself – and not to mention the likes of Shane Mosley and Pacquiao, that might sting Floyd most. For De La Hoya, even one of Mayweather’s more recent signature wins – against ‘Canelo’ – was tainted.

“Another reason boxing is better off without you: You were afraid. Afraid of taking chances. Afraid of risk. A perfect example is your greatest ‘triumph,’ the long-awaited record-breaking fight between you and Manny Pacquiao,” De La Hoya wrote.

“You should have fought Pacquiao five years ago, not five months ago. That, however, would have been too dangerous. Too risky. You’ve made a career out of being cautious. You won’t get in the ring unless you have an edge. Sure, you fought some big names. But they were past their prime. Hell, even when we fought in 2007 — and I barely lost a split decision — I was at the tail end of my career. Then later you took on Mexican megastar Saul ‘Canelo’ Alvarez, but he was too young and had to drop too much weight.”

“I got into this business to take chances. I took on all comers in their prime,” he wrote. “The evidence? I lost. Six times.

“The mantra of my firm Golden Boy Promotions is simple: the best taking on the best,” he added, which has been evidenced most recently by his fighter David Lemieux making his 1st IBF 160lb defence against the dangerous Gennady Golovkin, as well as Canelo’s upcoming clash with Cotto.

“You took the easy way out. When you weren’t dancing around fading stars, you were beating up on outclassed opponents. A lot of your opponents were above-average fighters, but they weren’t your caliber. You’re a very talented fighter, the best defensive fighter of our generation. But what good is talent if you don’t test it?”

“You’re moving on to a new phase of life now, a second act,” De La Hoya wrote in conclusion. “I’m sure it will be nice not to have to train year-round. … But I’m wondering what you’re going to do. You have a lot of time and, at the moment, a lot of money. Maybe you’ll put your true skills to work and open a used-car dealership or run a circus. Or maybe you’ll wind up back on ‘Dancing With the Stars.’ It’s a job that’s safe, pays well and lets you run around on stage.

“Something you’ve been doing for most of your career.”

Ouch…. One thing Oscar has achieved once again is to capture the boxing world’s attention….. Whether you agree with his assertions or not.

The full letter is published in Playboy magazine. Mayweather has yet to publicly respond.

Read:  British Legend Chris Eubank Mugged As He Walks Out Of A Bank