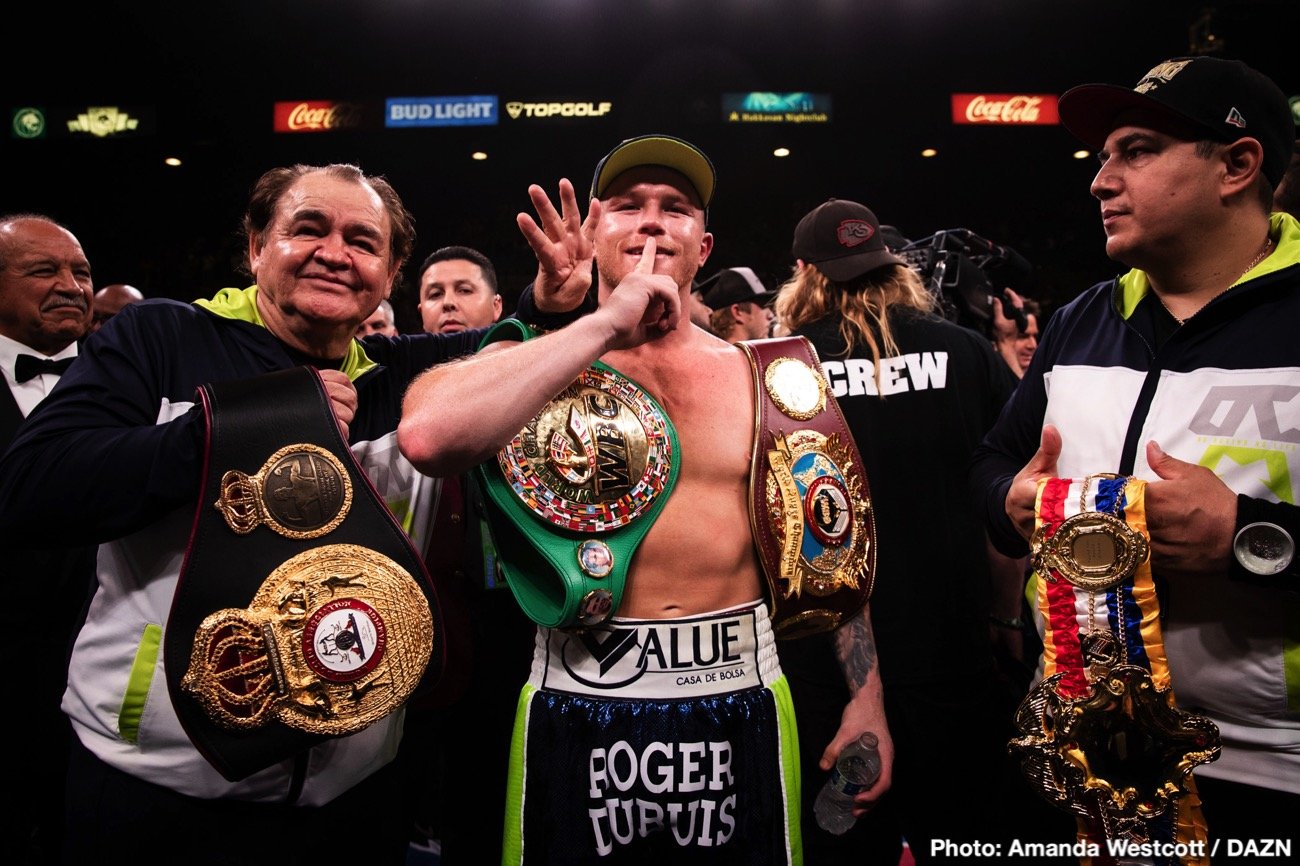 Golden Boy Promotions CEO Oscar De La Hoya quite pleased following Saul Canelo Alvarez’s 11th round knockout win over WBO light heavyweight champion Sergey Kovalev last Saturday night in front of a crowd of 14,490 fans at the MGM Grand Garden Arena in Las Vegas, Nevada. De La Hoya says he knew that the win for the 29-year-old Canelo (53-1-2, 36 KOs) would come in the later rounds because it wasn’t going to be an easy fight.

Canelo moved up two weight classes to take on Kovalev for his World Boxing Organization 175-lb title without the aid of a catchweight handicap. There was a rehydration clause in the contract that limited both fighters to 185 pounds for the secondary weigh-in on the morning of the fight, but who counts that?

“We couldn’t be happier with Canelo’s performance,” said De La Hoya at the post-fight news conference last Saturday night. “His calculation, his game plan, and what he was trying to accomplish. We at Golden Boy knew this fight wasn’t going to end in one, two, three, six or eight rounds. We know this fight was going to end in 10 or 11 rounds. That’s exactly what happened. Canelo is a fighter who will continue to prove everyone wrong, and I have to admit at times, he proves me wrong. But that’s who he is,” said De La Hoya.

For conspiracy theorists, De Hoya saying that he knew the fight was going to end in 10 or 11 rounds is a smoking gun in making them believe the outcome was preordained. In other words, the fight wasn’t on the level. It’s strange how a lot of fans are having a hard time believing that Canelo really beat Kovalev.

Canelo certainly picked the right guy for him to fight among the three light heavyweight champions. Had Canelo chosen IBF/WBC 175-lb champion Artur Beterbiev, he likely would have been the one that was knocked out. Out of all the guys that Canelo could fight at 175, Kovalev was perfect for him. Beterbiev would be on the opposite side of the spectrum. He would be the one that Canelo wouldn’t want to fight because he’s the real deal. He’s not old yet, and he’s not shot, and he can fight on the inside.

“Canelo is a fighter who is special, and therefore we must appreciate, and we must acknowledge that he’s one of the best if not the best Mexican fighter,” said De La Hoya. “But he is the best pound-for-pound fighter in the world today. We have to give him that acknowledgement, and we have to understand that Canelo moved up two weight divisions to fight a light heavyweight.

Whatever Canelo is, he’s not the best at 175 and he’s probably at 168 either. He certainly hasn’t beaten the best in either of those weight divisions. He never fought Callum Smith or David Benavidez at 168. And he didn’t fight Beterbiev or Dmitry Bivol at 175. Canelo’s win over Gennadiy Golovkin last year was controversial at 160, and he never fought Jermall Charlo. We can’t say Canelo is the best. What we can say is that he’s a good fighter, who has been lucky with the scoring of some of his fights, and has been carefully matched at times. If he was matched wrong, he probably would have lost if he’d faced Beterbiev, Bivol, Callum Smith or Benavidez.

“You can’t tell me that [Terence] Crawford or [Vasiliy] Lomachenko or anybody else in boxing is daring to be great like Canelo,” said De La Hoya.  “Is anybody moving up in weight classes, and is anybody unifying titles? No. Canelo is because he wants to be great, and wants to leave a legacy. That’s what legends do. They leave a legacy, and take risks. If you want to become a great fighter, you have to take risks. That’s exactly what Canelo did tonight. Yes, it was difficult, but he did a hell of a job,” said De La Hoya

The pound-for-pound rankings are all questionable stuff that doesn’t matter in the big scheme of things. There are fighters that move up in weight. Crawford and Lomachenko both did it, but they stopped once they got to a certain weight. Crawford has the talent to move up to 154 and 160 to win titles if his management carefully selected the weakest champion, which is what some believe happened with Canelo in him winning a world title at 168 against Rocky Fielding and at 175 against Kovalev.

It’s quite possible for fighters to win world titles in other weight classes if they’re picking the weakest of the champions. One reason why a lot of fighters don’t do that is because they can’t get fights against the weakest link champions in other weight classes because they don’t have the cache to do that. Canelo does. He’s a hugely popular fighter that can get champions like Fielding and Kovalev to fight him. But if he was average Joe, he surely would have been ignored by those champions if he moved up in weight and wanted to fight them.

So being popular gives Canelo an advantage that other fighters don’t have. Canelo picked Kovalev, arguably the weakest link among the 175-lb champion, and was able to get a world title shot against him despite the fact that he’d never fought at 175. He’d never fought a good super middleweight.