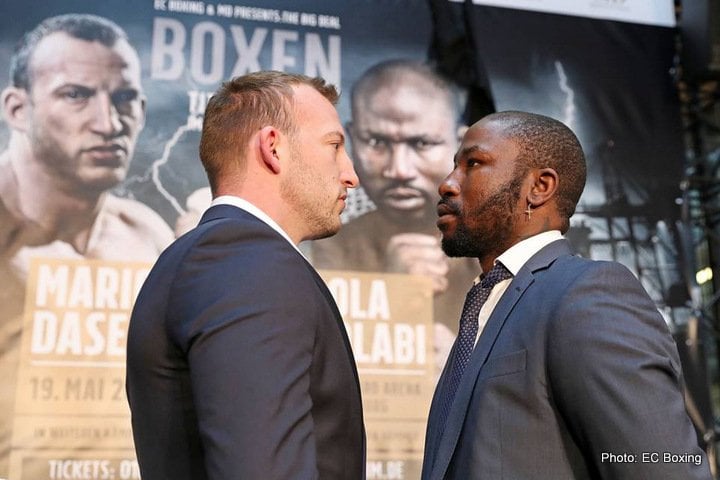 On paper, it looks like a terrible mismatch: This Friday, unbeaten but untested cruiserweight contender Mario Daser (12-0) takes on former IBO world champion and multiple time world title challenger Ola Afolabi for the IBO International International and WBO European Championship. The 37-year-old Brit who lives in Hollywood, California, has a record of 22 wins with only five defeats and four draws. Afolabi has been in the ring with some of the best fighters of his generation including Marco Huck (four times), Rakhim Chakhkiev, Victor Emilio Ramirez, Valery Brudov and Enzo Maccarinelli while Daser’s best opponent so far was Bosnian journeyman Drazan

„I was already retired but this offer was just too good to be rejected“, says Afolabi. „When I saw the figures on the contract I knew I had to come back. They are paying me a lot of money to beat up a guy who just isn’t my league. I couldn’t study any of his fights because they are not on YouTube. But I saw training videos on his Instagram account. No offense, but man, his shadowboxing looks like shit!“

Daser knows that he is the underdog due to his lack of experience but he feels comfortable with this role. „All my life people told me that I couldn’t do this and couldn’t do that. However, I always did it – and in the end I succeeded.“ Who is this guy who thinks that he can handle Afolabi?

28-year-old Daser was born in Munich, Germany, and is a self-made millionaire. Four years ago he bought a gravel quarry and worked 24/7 to turn his business into a success. He invested the money he made in real estate and made millions. „Everybody warned me to get into the gravel business and said that I would never make money with that. I proved them wrong. Now I want to do the same in boxing. I love it when people say that I don’t have a chance. That’s what brings out the best in me.“

The winner of the fight labeled as „The Big Deal“ may be in line for a world title fight soon. Afolabi is considering to enroll for the World Boxing Super Series after beating Daser. „I heard that they have a 50 million Dollar budget. That could be worth a try“, says Afolabi. „I am sure that there will be lots of young and hungry guys like this dude here who want to participate. If I can take care of him, I can take care of some others, too.“

On 19 May Mario Daser will fight former Cruiserweight Champion Ola Afolabi. According to the promoter Erol Ceylan of EC Boxing an international IBO title and probably a European WBO title too will be up for the taking. The dual is setting off a frenzy of speculation among fans worldwide, as Mario Daser only turned pro in 2009, plus he only has 12 fights under his belt – all of which he won. The rumour among experts is that Ola Afolabi will come out of retirement to earn another paycheck. But this is simply untrue, as Ola Afolabi has signed a three-fight deal with EC Boxing with the ultimate aim to see him become World Champion again. Fans can expect to see a Afolabi who is up for the fight, well-prepared and on top form. This makes the dual between Daser – who is still a little-known face internationally – and Afolabi a decisive fight for both contenders. As such, the evening’s slogan BIG DEAL is an apt choice. We met with 28-year-old Mario in Hamburg as we wanted to learn more about the two sides of him: as a person and as a boxer.

Mario, many people were surprised that you chose a boxer of Afolabi’s calibre for your 13th professional fight. Was that your or your promoter’s decision?

“I love boxing. But just like in life, I want to follow my own path, get ahead and get all the way to the top in boxing too. When you want to reach the top, you need to go head to head with the best in the weight class. Ola is a big name and has a crazy amount of experience; much more than me. But I know my capabilities and I’m absolutely certain that I’m going to emerge victorious. Together with my trainer Bülent Baser, we’ve been training flat out – and given that Ola hasn’t set foot in the ring for a while now, he shouldn’t underestimate me.”

“Yes, that goes both ways. That’s what’s so great about boxing: in the end, you face each other in the ring and it doesn’t matter one bit what you said before. It’s all about him and me, and our fists.”

The feeling of battling to the end is nothing new to you. You were on a slippery slope as a youngster.

“That’s true. I grew up in the Munich district of Hasenbergl, which isn’t the greatest area. While others went to school, I hung out with my mates and screwed around until I started boxing. The sport changed everything. In the gym, I didn’t win to begin with. I really took some punches in training. I was a complete write-off – and that really annoyed me. But I persevered; I wanted to keep getting stronger no matter what. I then had my first successes. Things ‘clicked’. I realised that things really can change in life. And then there came a time in training when nobody could give me a black eye any longer.”

What happened after that?

“Only good things, actually. I met my wife. And I finally wanted to work. I took a job as a driver for a dental lab, driving teeth around in an old VW Polo. For €1,300 a month, I was getting up at around 6am every day, and only getting home at 8pm. Then my wife’s father died. He owned a gravel plant, and when we took over the role of supporting the grandmother she offered us this gravel plant. None of the other relatives wanted it. A friend gave me some money and I took over the small family business in Munich. I then drove loaders day and night, 24×7 myself. At the beginning we had no money for employees – and sometimes not even enough for the diesel. But I simply just had to make a success of the business. Many advised me to sell it, but I didn’t want to. I now have eight employees.”

Today you’re a multi-millionaire, and that’s without the boxing income.

“The gravel plant already generated solid profits, but it also included a nice plot of land with a house. The bank lent me money against the value of the property. And with this money – €3.8 million – I invested in more properties. These included residential buildings which I did up and sold again – for a good price. And so it continued. I seem to have an eye for property.”

Financially speaking, you don’t need to box. Why take the torture in the gym and face the risk of getting injured?

“Each of us has a path to follow, and it isn’t always straight. Boxing put me on the right path. I learnt that you can achieve anything in life if you want. And my goal is to become Cruiserweight World Champion – no matter how. And as much as I pity Ola , I’m going to fight hard to achieve this goal. This means defeating him. But I also want to send a message with this fight: no matter how much crap you’ve had to put up with, you can achieve anything.”

A boxing event will be held on 19 May at the Barclaycard Arena with a format the likes of which Hamburg has never seen before. The event day will see the arena’s indoor area converted into an exclusive banqueting venue with over 60 tables. In addition, spectacular show acts are planned alongside six high-class boxing matches. The main bout will see unbeaten ECB fighter and Hamburg-based Mario Daser (12-0, 5 KOs) go head to head against the Brit Ola Afolabi (22-5-4, 11 KOs). Up for the taking will be an international IBO Cruiserweight and a regional WBO title. EC Boxing’s heavyweight-division fighter Christian Hammer (2nd in the WBO world rankings) will also give the audience a taste of his skills. He will defend his WBO European Champion title to put himself within reach of a World Champion fight. Hamburg’s local hero and EC Boxing’s new signing Sebastian Formella – still unbeaten in 14 professional fights (8 KOs) – will fight Dennis Krieger (12-4-2) for the international IBO Middleweight title. Boxing fans can now buy tickets online to the evening’s match from Eventim and all affiliated ticket agencies. Grandstand tickets are available from €25.13, with tickets for the exclusive VIP tables (meal included) starting at €250.00.