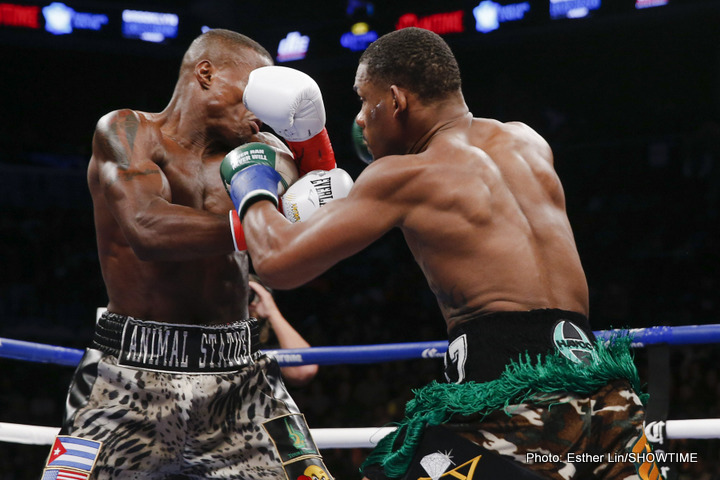 There are a number of talented fighters out there today, all calling themselves a world middleweight champion. In reality, Saul Alvarez is the real middleweight king, while unbeaten and avoided Gennady Golovkin is widely viewed as the best in the world at 160. But this doesn’t mean the other belt holders, Danny Jacobs and Billy Joe Saunders amongst them, cannot engage in interesting and potentially exciting fights.

And “regular” WBA middleweight ruler Danny Jacobs has made it clear he very much wants a unification fight with reigning WBO champ Saunders this summer, in his next fight. The two have exchanged words on Twitter, with Jacobs calling Saunders out and the British southpaw responding to Jacobs, stating how he will happily “kick you ass son.”

Jacobs, who is coming off a very impressive 1st-round stoppage over Peter Quillin, urged Saunders to “sign the contract!!!!” According to a piece on RingTV.com, Showtime TV network are interested in showing the fight, if the match-up can get made. Recently – and again, whilst speaking live on Channel 5 at the ill-fated Eubank Junior-Nick Blackwell fight on Saturday – Saunders said he wants to fight GGG this summer in a huge stadium fight. “I want to see what I’m made of,” Saunders stated on Saturday night.

But if that fight isn’t made (and there are seemingly precious few people who think it will happen, at least not this year) Saunders could get what would likely be a big payday in a unification battle with Jacobs. The fight makes sense, but so too does a Saunders-Eubank Junior rematch (Saunders beat Eubank via decision, handing the new British champ his sole pro loss). Saunders, who must first defeat Max Bursak at the end of next month, seems to have options.

However, according to Showtime’s Stephen Espinoza, who spoke to RingTV.com, so too does Jacobs. Jacobs, if cannot get Saunders, will likely face former WBO champ Andy Lee, who was last seen losing a decision to Saunders (and has asked for a rematch). So it seems Jacobs, beaten only by Dmitriy Pirog way back in 2010 – since which time he has taken on and courageously won a far more important bout with cancer – will fight this summer whoever it is he faces.

If Saunders does not take the ultimate fight and challenge Golovkin, and if a Eubank Junior sequel cannot get made soon, Jacobs is the natural fight for the WBO champ to take. The winner would only see his stock rise, giving him further bargaining power for future big fights – whether they include GGG or not. But would Saunders agree to go to the US to fight Jacobs? Would Jacobs agree to travel to the UK?