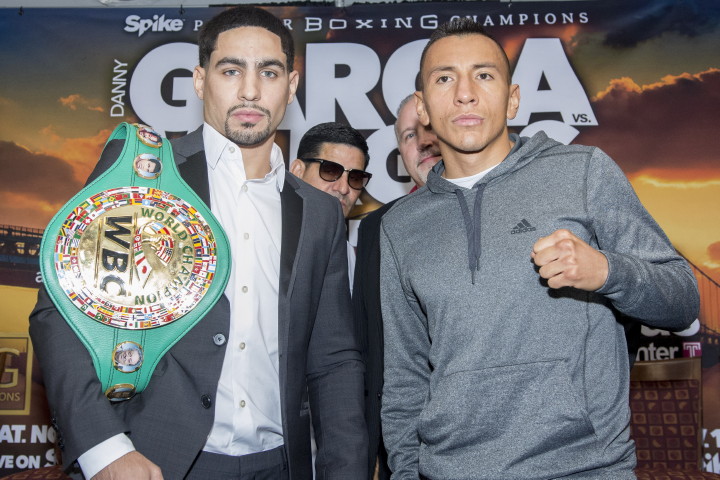 Garcia also announced his partnership with Philabundance, the region’s largest hunger relief organization, to arrange a food drive, collecting the most-needed items, such as tuna and vegetables for people in the Philadelphia area. Fans are being encouraged to drop off canned goods at the Liacouras Center (1776 N Broad St) and the DSG Boxing Gym (3731 Jasper St). Additionally, $10 from each ticket sold will be donated and provide 20 meals per ticket for people in need.

Here is what the participants had to say Thursday:

“Being able to partner with Philabundance is a tremendous thing. At the end of the day, that’s what it’s all about. When you’re fortunate, your job is to give back and change someone else’s life. I’m looking forward to a great night and a great turnout.

“I want to thank the City of Philadelphia. I’m just excited to fight at home. This card is going to allow a lot of great local fighters to be on a big stage.

“I can’t look past Samuel Vargas and I know his trainer has a couple tricks up his sleeve. I know they’re going to come to fight, but I will never underestimate anyone. I’ve learned my lessons to become the champion I am today.

“I know Vargas knows how to win. He’s won a lot in his career. I’m going to go out there and just fight. If it goes the distance, then it does. I can’t underestimate him. I’m going to put on a great show and dominate.

“People are acting like Keith Thurman has a cape like Superman and can fly. I want the other champions to think I’m vulnerable. Those are my easiest fights. I have to get past this fight to get to the next one.

“I feel like I owe this to my fans to fight in Philadelphia. The last time I fought at this venue was on a Bernard Hopkins undercard and I got a big knockout. I plan on doing the same November 12.

“I have a good team around me. There should be no distractions leading up to this fight. All the people who deserve to get tickets will be there and there won’t be anything distracting me. I’m 100 percent focused on this matchup.

“I’m at the point in my career where I’m working smarter and harder. Come November 12 we want to give the city of Philadelphia a night to remember. I can’t overlook this fight, but I guarantee that I’m going to unify titles at 147 pounds soon.”

“I’m very blessed to be here today. This fight could change my whole life. The lives of my family. Danny is a great fighter and I have to give it my all.

“I have to take advantage of this. I have the best trainer in the world with me and we’re going to take care of business November 12.
“Me and my trainer work on a lot of different styles. We like to switch it up and keep the opponents guessing. Sometimes we pressure and sometimes we stay outside. I’m learning every day and making adjustments.

“I’m an underdog and I have been my whole life. There are very few options for a Latin immigrant all the way up in Canada. I beat the odds to make it up there and have a life and a family.

“I’m a guy with just over 10 amateur fights and I’ve made it this far. Danny Garcia is my chance. I have to make the best of it and give it my all. This is everything for me.”

“I’ve been to Philadelphia a couple times and the city has welcomed me. I just want to put on another show. This will get me one step closer to my dream of fighting for a title.

“We’ve looked at some of my opponent’s fights and he’s a veteran. He’s got a lot of power and a good knockout rate to go with it. He’s awkward and tall. If you don’t come in on top of your game, he can make you look bad. We’re looking to do what we always do.

“I learned a lot from my last fight. It opened a lot of doors for me, like fighting on the Danny Garcia undercard. I feel like I’m what the division is missing. I’m a tall, lanky fighter with a lot of power and good hand speed.

“My time is here. I feel like this is my opportunity to get closer to fighting for a world title. I can’t wait to become a world champion.

“I want to face all of the 154-pounders. We’re not ducking anyone. There are so many talented fighters in the division, but I believe that me and my team train so hard and prepare so well that we’re ready to face any of them. The time will come and we’re just waiting.

“This is a tremendous opportunity to be on the Danny Garcia undercard because we’re all trying to get to where he’s at. Make sure you’re watching my fights because I promise I’m going to do something memorable.”

“I just wanted to say this is the opportunity of a lifetime to fight in Philadelphia where my career started. I won Pennsylvania Golden Gloves several times.

“To be in with a former world champion is a terrific thing. I’m going to take full advantage of this opportunity. I’ve been waiting for this a long time and this is my time.

“Fortuna is a very confident fighter. He likes to give it all the first few rounds. I’m going to come in and use my jab and invest in the body. I think we can have an early night.

“I believe I have the best jab in the business. I have to keep him off me with the jab and head movement. I’ve been fighting for a long time and there’s nothing I haven’t seen.

“I think I’ve improved a lot. Fighting guys with one loss and world ranked guys over my last couple fights has helped me. My confidence is definitely rising every day.

“You can look forward to a crowd pleasing performance and knockout.”

“Danny has been the underdog before. Lucas Matthysse or Amir Khan, you name it. We don’t underestimate Vargas. We don’t take him lightly. We are going to come ready to rumble.

“Vargas is the underdog today, but Danny has been the underdog his entire life. November 12 my son will still be undefeated.

“I came to Philadelphia at six years old. I had no food. Only you know you’re pain. I ate a lot of food from a can growing up, so if you guys donate anything or buy a ticket that donates money, you’ll be doing something great. We pray every day for the hungry kids, not just in America but the whole world.”

“This is a great opportunity for me and Samuel. In my opinion he’s an underrated fighter. He’s been under the radar for a while. We’ve been working together in Canada and starting a farm system.

“We’re fighting in my opinion the best welterweight in the world. This is no easy task and we’re not fooling ourselves. We won’t leave any stone unturned.

“We’ll find a way and we’ll make a way. That’s what we’re going to do and I look forward to this.”

“It’s very exciting to be promoting this young man, Danny Garcia. I remember him as a young kid and it’s exciting to see where he’s come in the world of boxing. I’ve known a lot of these guys for a long time and I’m excited to see how they perform.

“This card is going to be stacked with local talent and I hope that everyone comes out and supports these fighters and this great cause.

“I’ve always wanted to bring Danny Garcia to Philadelphia and the commission is thrilled to bring him back to this great city and we’re going to make it worthwhile.”