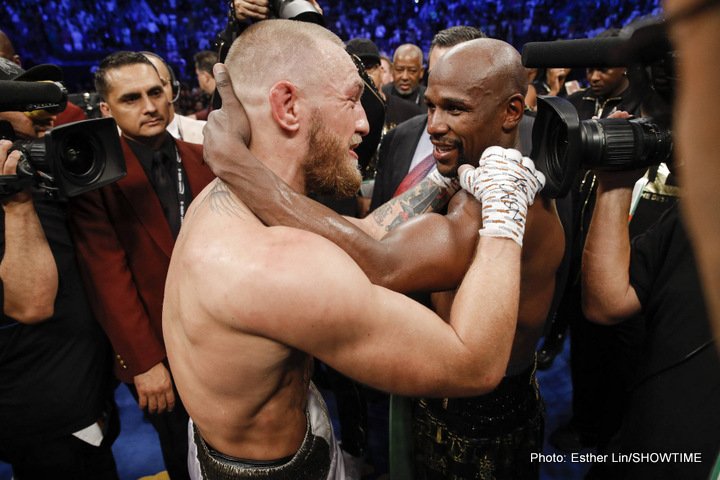 Thought the official numbers are not yet in and will possibly not arrive until next week some time, there is a suggestion that last Saturday’s monstrously hyped “Money Fight” between Floyd Mayweather Junior and Conor McGregor pulled in a staggering 6.5 million pay-per-view buys.

This is what UFC boss Dana White said when speaking with Urijah Faber and Snoop Dog – as reported by MMA Fighting. These numbers, if accurate, are quite incredible; even if they are the claimed worldwide total buys and not the US total. Worldwide, the current American record holder for pay-per-view buys in boxing, Manny Pacquiao Vs. Mayweather, pulled in around 5.5 million buys, while in the US “The Fight of The Century” from May of 2015 brought in 4.6 million buys.

Again, the exact number of buys Mayweather-McGregor pulled in can be expected to be announced either later this week or early next, but it seems clear the fight did extremely well. It’s not clear where White got his 6.5 million number from, but maybe the UFC boss has inside info he trusts.

Another record “The Money Fight” may well have broken is that of most successful streaming pay-per-view event ever; with the fight attracting incredible numbers (even though many of these watching fans suffered the frustration of a poor feed). The live gate in Las Vegas was not so great, with thousands of seats left unsold inside the T-Mobile Arena. But this was very much a TV fight anyway, with the curious and the fun-loving choosing to enjoy the event in a party-type atmosphere at home.

Many critics are still moaning and groaning about the “circus” element of the “mismatch,” but all those involved with the fight are laughing all the way to the bank. On another note, McGregor – who, let’s be honest, did far better than anyone said he would – has stated how he feels his conqueror in the ring, Mayweather, has what it takes to be a decent MMA fighter.

It’s an absolute certainty that “Money” will not try his hand inside the octagon, but it’s quite incredible the mutual respect these two superstars from different combat sports now have.