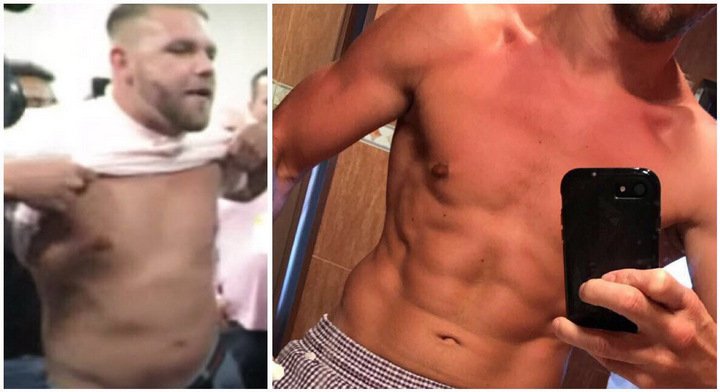 With less than three weeks to go until fight night, Billy Joe Saunders is in the shape of his life for his next World Title defence.

On September 16th, the unbeaten Middleweight defends his WBO crown against American Willie Monroe Jr at the Copper Box Arena, live on BT Sport and BoxNation.

Saunders recently teamed up with Sheffield-based trainer Dominic Ingle, and the move appears to be paying off.

The southpaw celebrated his 28th birthday on Wednesday, but confirmed he wouldn’t be having any birthday cake. “No celebrations until after my fight as I’m in camp, but I’ll have a tin of tuna,” he tweeted.

READ:  Miguel Berchelt Says Fight With Oscar Valdez Is “Close,” Will Be The Next Great Mexican Slugfest

Last time out, Saunders laboured to a points win over game Russian Artur Akavov, but admitted he was not fully fit and was dissapointed with his performance.

Now with the new team around him at Ingle Gym, the Hatfield star is confident he can kickstart his career as he eyes a big Middleweight unification against the winner of Canelo vs. Golovkin.

As well as Ingle, Saunders credits his nutritionist Greg Marriott: “It seems like I have someone practically living with me monitoring my every move towards the fridge!

“I would say my attitude towards boxing as a whole is on a different level since I have been in the Ingle camp,” he wrote in a recent Fighter Diary.

Brook is also trained by Dominic Ingle, who recently teamed up with Saunders as he prepares for the second defence of his WBO World Middleweight Title.

The Hatfield southpaw hopes to face the winner of Canelo Alvarez v Gennady Golovkin, who square off in Las Vegas just a few hours after Saunders’ bout at the Copper Box Arena.

In September 2016, Brook stepped up in weight to take on ‘Triple G’, but Ingle threw in the towel in the fifth round after Brook sustained heavy damage to his right eye.

Should Saunders meet Golovkin soon, then perhaps he will ask his Sheffield gym mate for a few words of advice.

Saunders is in tremendous physical shape for his fight with Monroe Jr, and has praised his new coach for the training methods at the Ingle Gym.

“Dom reminds me in a way of my first trainer Jimmy Tibbs,” said Saunders. “He will take no nonsense at all, he doesn’t care who you are – whether you are a superstar or a fly on the wall in the gym.

“He treats everyone the same, but training is training and work is work. That is the way he looks at it and that is what I need.

“Myself and Dom have got a good natural respect for each other. In this game it is very hard to find someone you fully trust, but I absolutely trust him and give him everything I’ve got in the boxing side of it – every bit of trust I’ve got.

“I have put my career into his hands and it is working for me so far.”

Saunders and Monroe Jr. square off on September 16

Hatfield’s Saunders (24-0, 12 KOs) defeated Irish hero Andy Lee to take the WBO strap in a close and absorbing fight back in December 2015 that saw the undefeated star floor the former Champion twice in the third round and go on to claim a majority decision from the judges.

A series of injuries led to a frustrating 2016 for Saunders, but he eventually defended his belt last December against Artur Akavov in Glasgow. Saunders was not at his best, but outpointed the game Russian. He was due to take on Avtandil Khurtsidze before the Georgian’s arrest in June.

Monroe Jr (21-2, 6 KOs) has a second chance at winning a World Title after a sixth round stoppage loss against IBF, WBA and WBC Middleweight World Champion Gennady “GGG” Golovkin back in 2015. Since then the 30-year-old has won two decisions over John Thompson and Gabriel Rosado and holds a number five World ranking with the WBO.

“Willie is a good fighter and a good boxer,” said Saunders. “This is his big chance and he isn’t coming over here just to make up the numbers. He has been in with some of the best fighters in the World including Golovkin where he came up short.

“I think it is going to be a very close fight but I already have the mental edge over him. He said he was done against Golovkin and that’s not what a warrior would do. I’d rather get knocked out cold than quit. I haven’t had the chance to show my true skill and talent as of yet as a pro. I can’t afford to overlook him and I’ll be in the best shape of my life on September 16th. I’m 100% going to get the win.”

“I am happy for this World Title opportunity,” said Monroe Jr. “I’m always in the gym and I’m ready to go now; I live the life. I can’t wait to show up and show out in London. Saunders is a good fighter and a worthy World Champion but I’m coming for that belt.

“I gave a good account of myself against Golovkin but I will admit that I got caught up in the moment. Billy Joe has had a lot of luxuries throughout his career that I haven’t had. All of his fights have been here in his own backyard, he hasn’t had to go into the Lion’s Den to prove himself. He calls me mentally weak but we’ll see on September 16th.”

Saunders’ promoter Frank Warren said: “Bill will have to be at the very top of his game to get the win on September 16th. The winner of this fight will have the missing piece on the Middleweight jigsaw, Canelo and Golovkin both want that WBO belt.

“If Bill comes through this fight we are pushing hard for the winner of Canelo vs. Golovkin. If Golovkin wins I hope we can do that fight in December, if Canelo wins it could be in the New Year. Bill has to go out there and prove a point, there is a lot on the line.”

Artie Pelluo of Banner Promotions said: “I am very happy for Willie; this is a great opportunity. A lot of things had to fall into place for Willie to get this fight. Saunders is a great fighter, and this should be a terrific event. I want to thank tthe WBO as well as Frank Warren and Billy Joe Saunders for this opportunity.”

Ilford Light-Heavyweight knockout king Anthony Yarde and teenage Heavyweight sensation Daniel Dubois will feature on an action-packed undercard. Yarde picked up the WBO European strap with a first round KO win over Richard Baranyi last time out at the Copper Box Arena while 19 year-old Dubois claimed the WBC World Youth Heavyweight belt in only his fourth contest.