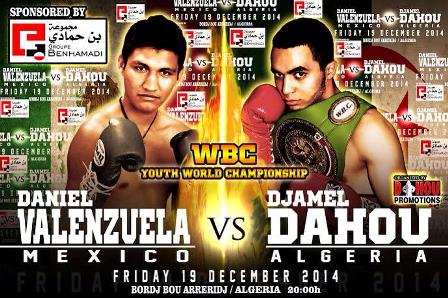 The countdown has begun to the epic boxing battle in Algeria on December 19 when world title chasing home boy, Djamel Dahou squares off against Mexican Daniel Valenzuela for the vacant WBC Youth Interim Welterweight title.

Such is the huge support for undefeated Dahou (12-0, 11 KOs) in his country he has vowed to personally undertake the mission to put Algeria’s name on the map of world boxing, beginning with victory over Valenzuela next month.

“I am very grateful to my sponsors, Group Benhamadi for their support and help to bring a very respected WBC world youth championship to Algeria. I thank all Algerians for their support and prayers,” Dahou said.
True, Groupe Benhamadi have taken it upon themselves to sponsor Dahou all the way to the world championship and have lined up WBC International title for the boxer nicknamed King next year should he succeed in annexing the WBC Interim Youth belt on December 19.

Backed fully by the Algeria Boxing Board who are keen to see the sport develop and expand in the North African country, Groupe Benhamadi have also sworn to work assiduously towards earning Dahou a world title shot by the end of 2015 should he win both the WBC youth and international titles.

And the boxer himself is very much fired up for the challenge, even daring to challenge Algeria’s national football team which are riding a year of huge success after making the second round at the FIFA World Cup for the first time ever as well as currently ranked the number one team in Africa.

“I can’t thank Groupe Benhamadi enough than to win all the fights they put in front of me. I am training hard every day and I promise to put Algeria’s name on the world map through boxing,” Dahou stressed.

“I know the national football team made Algeria proud at Brazil 2014 but I promise my people what I am going to do through boxing will bring even more glory and honour to our country. It’s a promise,” Dahou said.