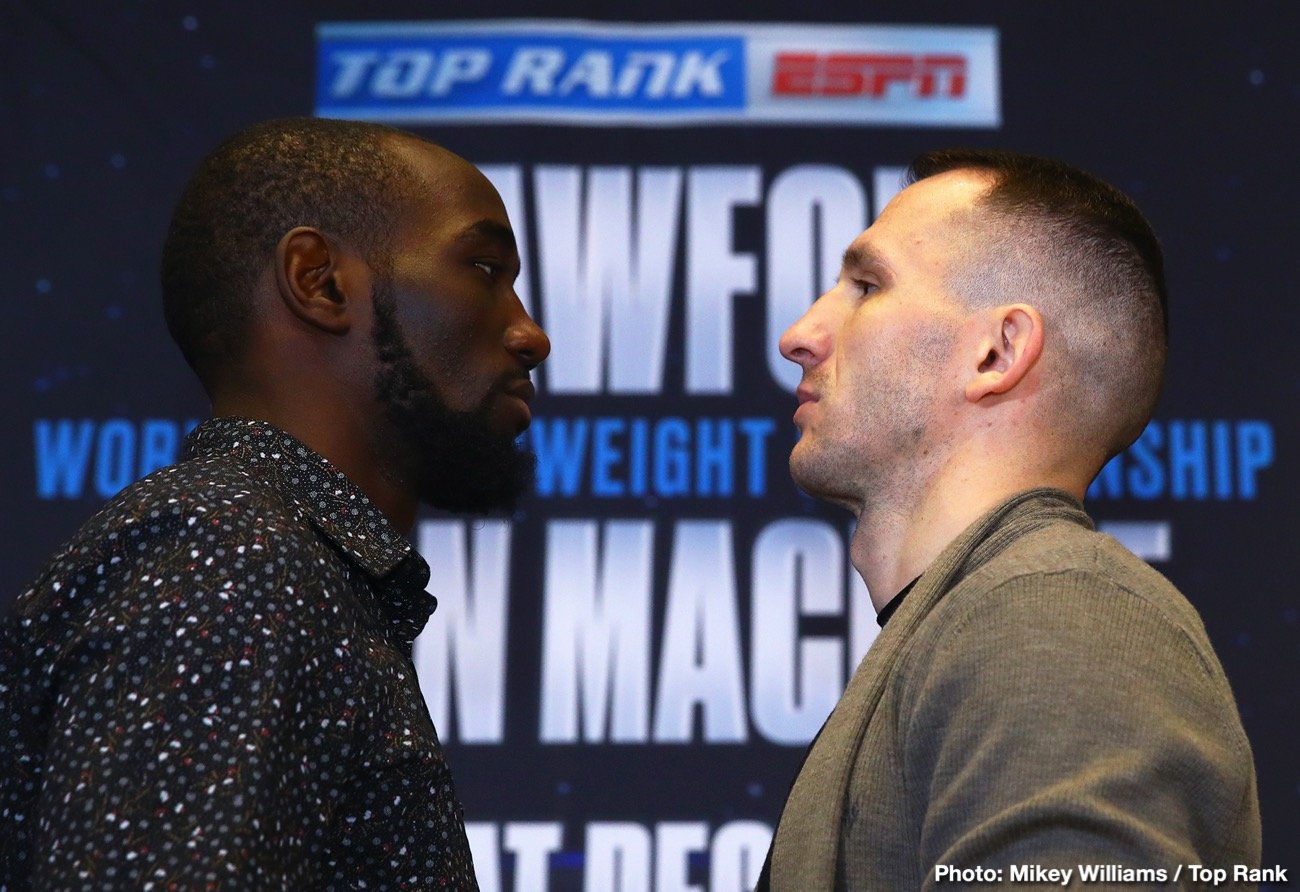 The fighters were all business on the press conference dais. The best triple-header of the 2019 boxing calendar didn’t need any pomp and circumstance.

The ESPN opener will see Irish sensation Michael “Mick” Conlan (12-0, 7 KOs) hoping to turn back amateur nemesis Vladimir Nikitin (3-0, 0 KOs) in a 10-rounder at featherweight. Nikitin defeated Conlan twice as an amateur, including in their 2016 Olympic quarterfinal bout, a decision that sparked international controversy.

At Wednesday’s final press conference, this is what the fighters had to say.

“I’m starting to get used to fighting on these big stages, so it ain’t nothing new to me. This week is going to be a great, spectacular show. I am well-prepared for whatever he brings to the table, and I’m sure they know that as well.”

“Nothing really changed between me and {trainer Brian McIntyre}. We’re a team. Iron sharpens iron. We added some more great fighters to the team. We’re pushing each other each and every day in camp. If I’m tired, {Maurice Hooker} will talk to me, ‘Come on little guy, you tired?’ And that just motivates each and every one of us to go that extra mile. Either we’re running, sparring, hitting the bag. Everything is a competition when we’re in the camp.”

“I’m not focused on no other opponent besides the opponent that’s in front of me. My goal is to make sure I get the victory come this weekend, and that’s the only person I’m focused on now. Anyone else is talk. It goes in one ear and out the other. He’s young, hungry and I’m not taking him lightly.”

“They’re all good fights.The Teofimo-Commey fight, bookmakers have made that a 50-50 fight, so that’s obviously of great interest. And the other two fights are not walkovers. They’re tough, tough matches. Terence is worth the price of admission by himself. He is pound-for-pound the best fighter in the world, and everybody will have an opportunity to watch him fight a very tough Lithuanian in Kavaliauskas, who has fought for us for many years and is a tough, tough Eastern European fighter.”

“Mick Conlan gets his chance for revenge. You all know the story. When most people thought he’d won his fight in the Olympics and Nikitin was given the nod, now they have a chance in professional boxing for revenge, a rematch. And that will be of interest to fans all over the world.”

“Some young man who has three of the lightweight titles and is looking to fight for a fourth will be on hand. He’s coming in on Friday to watch this match. Vasiliy Lomachenko will be here. A lot at stake in this Lopez fight with Commey. Both great fighters.”

“Crawford was on my mind from the start of training camp in June. So every day was Crawford, Crawford, Crawford. My mindset is good. I’m happy for this fight. When this fight was made officially, I was super happy. I was smiling all day. I want to fight the best, and we’re fighting in the Mecca of Boxing.”

“We started {training} in June, but we started light. Still, all the tactics, everything was about how Crawford fights, which stance {he’ll use}. Sparring, we had lots of different guys, southpaw, orthodox, guys in different stances. And the training camp, [we worked on} speed, power, sparring, technique and tactics, all in this five, six months.”

“Going straight ahead to Crawford is not an option because he’s too smart and he showed in his last fight that he’s smart in the ring. So, yeah, we’ll work on my combinations. We don’t want to go very wild at him.”

“2019 has been a great year. I’ve worked so hard coming from Ghana. You know how it is. To get to this stage, man, just an amazing feeling.”

“How many boxers have come from Ghana with a chance to fight in {The Garden} in the co-main event…God bless us, and I’m ready to retain my title. There is no way I’m going to lose.”

“It’s a blessing. And it’s a breathtaking moment. It’s just something I have to visualize and just know that, 22 years old, I have a great opportunity here to do a lot. I’m excited, man. What better way to finish off the year than fight in the Mecca of Boxing, Madison Square Garden, for my first world title, in New York? This is a moment right here.”

On the criticism from his last fight against Masayoshi Nakatani

“I think everybody needs something like that. I needed that. Everything happens for a reason. I take everything they try to throw at me negatively and turn it into a positive. You can’t faze me. You can’t bring me down. I’m here for a reason. Teofimo is doing what he’s doing come Saturday night. We’re going to go out there and take over. I have vengeance in me. I’m holding that, holding everything. I want to shut everyone up the best way I can, and that’s doing what I do best.”

“God didn’t bring us this far for nothing. I didn’t come out here just to talk my smack and not back it up. We’re gonna do what we have to do. Richard Commey is a {former} world champion for a reason. And we know that it’s going to be a great and exciting fight.”

“This is straight business for me. There is no personal or emotional attachment to it. Vladimir, obviously he beat me in 2013 when I moved up to bantamweight. 2016, he got the decision, but he knows deep down he needs to prove something because his career will always be remembered for losing to me in the Olympics. He’s gotta prove something Saturday night. I don’t believe he will. I’ve prepared fully, and I’ve been training for 14 or 13 weeks for this camp. I’m ready for anything Saturday night.”

“It’s very fitting for me to be boxing here, having this rematch in MSG. This is where I re-started my boxing career after the Olympics, and this is where I’ll close the chapter. We’ll put everything in the past and we’ll stop talking about him because I’m fed up with it. I just want to take care of business and move on.”

“I don’t have to prove anything to anyone. And I won two bouts against him in the amateurs and, right now, this is just another big step in my professional career.”

“I fought my last fight here at the {Hulu Theater} at Madison Square Garden. I’ve been in the arena. This is the next step in my professional career. I am preparing for every fight {the same}. It doesn’t matter.”

Promoted by Top Rank, in association with DiBella Entertainment and MTK Global, tickets priced at $506, $306, $206, $106 and $56 (not including applicable fees) are on sale now and can be purchased at the Madison Square Garden Box Office, all Ticketmaster outlets, Ticketmaster charge by phone (866-858-0008) and online at www.ticketmaster.com or www.MSG.com.